International Classification of Diseases. Search Our Bibles – BibleRescue. Digital Collections - SMU. You Use What 10 Apps and Websites for Genealogy. Mayflower Descendants. How many descendants of the Mayflower are alive today? 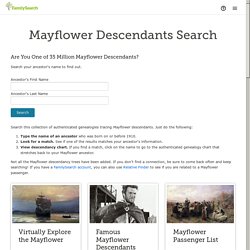 According to the General Society of Mayflower Descendants, there may be as many as 35 million living descendants of the Mayflower worldwide and 10 million living descendants in the United States. What percentage of Americans are descendants of the Mayflower? According to one survey, around 25 percent Americans believe they descended from Mayflower passengers. However, the actual percentage is likely much lower—it is estimated that 10 million people living in the United States have ancestors who descended from the Mayflower, a number that represents only around 3.05 percent of the United States population in 2018. Legacy Family Tree Webinars : Membership Area. A U.S. Air Force KC-135 Stratotanker takes off for a refueling mission March 1ST,1999. KC-135s are deployed from Fairchild Air Force Base, Washington, and McGuire AFB, New Jersey, to Moron Air Base, Spain.

Genealogy 101: Family History Research & InterLibrary Loan. How To Use U.S. Census Data for Genealogy. Charting your family’s bloodline and identifying your ancestors is one of the most eye-opening and exciting endeavors available to us. 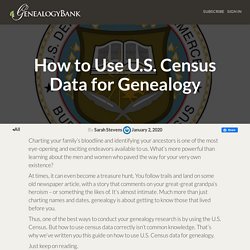 What’s more powerful than learning about the men and women who paved the way for your very own existence? Your Guide to Not Getting Murdered in a Quaint English Village. Beautiful Free Images & Pictures. Witches. Family History Timeline. 1 Generation – 1 Week. What if we EACH spent next week coordinating 1 generation of paper, digital and online genealogy files? 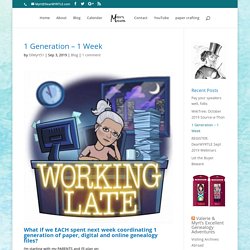 I’m starting with my PARENTS and I’ll plan on: Scanning photos and documents from my paper filesTake digital pics of heirlooms including furniture, books, china, crystal, jewelry, the piano, the organ, etc.Attaching scans and heirloom pics to mom and/or dad in my RootsMagic genealogy management softwareUploading scans to my AMT (Ancestry Member Tree) using RootsMagic Tree ShareDownloading any attached documents from my AMT using RootsMagic Tree ShareUploading scans to FS (FamilySearch profiles for Dad and MomVerifying there are no additional documents on FamilySearch that I don’t have in my RootsMagic Future Plans After six generations are completed, I’ll create a GEDCOM file to replace my old one at the following websites: FindMyPastGeni.comMyHeritageWikiTree This project is similar to yet different from Amy Johnson Crow’s “52 Ancestors in 52 weeks. 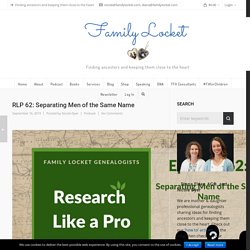 Boost Your Genealogy Productivity with Google Keep – Family Locket. How do you keep track of the various projects or to-do lists in your genealogy? 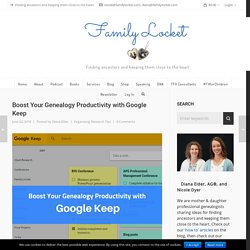 Do you fill sticky notes with ideas about what to do next or get overwhelmed with all of the thoughts running through your head? Google Keep is my new favorite productivity tool and it might be just what you need to organize your genealogy life. Think of it as a place to keep all of your sticky notes – electronically. You can access Keep on the web at keep.google.com, install and use the Keep Chrome browser extension, and/or download the Keep mobile app on your phone. Your notes can contain text and lists, images, web content and even audio recordings. Pay your speakers well, folks. Recently a state genealogical society put out a call for webinar proposals indicating speakers were to waive all or part of the speaker’s fee and that it would be negotiated after the presentation. 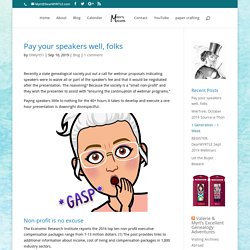 The reasoning? Because the society is a “small non-profit” and they wish the presenter to assist with “ensuring the continuation of webinar programs.” Paying speakers little to nothing for the 40+ hours it takes to develop and execute a one hour presentation is downright disrespectful. Non-profit is no excuse The Economic Research Institute reports the 2016 top ten non-profit executive compensation packages range from 7-13 million dollars. (1) The post provides links to additional information about income, cost of living and compensation packages in 1,000 industry sectors. Closed-minded boards. Free Irish genealogy resource availabel online today. Free Irish genealogy resource available to all online. 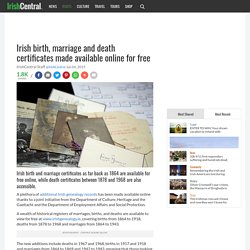 Getty A plethora of additional Irish genealogy records has been made available online thanks to a joint initiative from the Department of Culture, Heritage and the Gaeltacht and the Department of Employment Affairs and Social Protection. A wealth of historical registers of marriages, births, and deaths are available to view for free at www.irishgenealogy.ie, covering births from 1864 to 1918, deaths from 1878 to 1968 and marriages from 1864 to 1943. The new additions include deaths in 1967 and 1968, births in 1917 and 1918 and marriages from 1864 to 1869 and 1942 to 1943, meaning that those looking to delve into their family’s history online can now go deeper than ever before. The death certificate of poet Patrick Kavanagh, who died in 1967, is now freely accessible to the public through the extensive records, as is the death certificate of novelist Walter Macken who also passed away in 1967.

Caprock Chronicles: The Second Battle of Adobe Walls - News - Amarillo Globe-News - Amarillo, TX. Nothing remains of the ruins, but historic monuments mark a place in Hutchinson County known as Adobe Walls, where two celebrated battles—ten years apart—between Native Americans and frontiersmen shaped the future of civilization on the Llano Estacado. 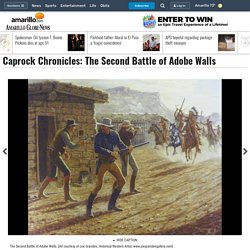 Adobe Walls was a Texas Panhandle outpost established in the early 1840s as a marketplace for white trade with Indians in the area. But by 1848, conflict with aggressive Comanches forced the traders to abandon the fort. They blew the place up with gunpowder. The adobe ruins became a landmark to warn those venturing into dangerous Comanche territory. September 18-20, 1863: The Battle of Chickamauga. On September 18-20, 1863, Union and Confederate forces engaged in the Battle of Chickamauga, a bloody Civil War battle fought near the Chickamauga Creek in Georgia. 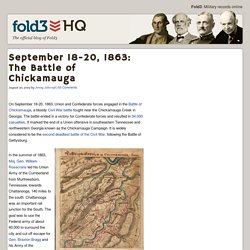 The battle ended in a victory for Confederate forces and resulted in 34,000 casualties. It marked the end of a Union offensive in southeastern Tennessee and northwestern Georgia known as the Chickamauga Campaign. It is widely considered to be the second deadliest battle of the Civil War, following the Battle of Gettysburg. In the summer of 1863, Maj. Gen. Federal Census Questions at a Glance. Ask a genealogist about her most used genealogy record, and nine times out of ten she’ll bring up census records. 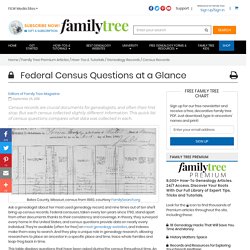 Federal censuses, taken every ten years since 1790, stand apart from other documents thanks to their consistency and coverage. In theory, they surveyed every home in the United States, and census questions provide data on nearly every individual. They’re available (often for free) on most genealogy websites, and indexes make them easy to search. Requesting Records. Understanding the Scottish Naming Pattern - The In-Depth Genealogist. A helpful piece of information to have when researching in the Scottish records is an understanding of the Scottish Naming Pattern. Here’s how it works: First Born Son – named for the paternal grandfatherSecond Born Son – named for the maternal grandfatherThird Son named for the father – unless he shares a name with one of the grandfathersFourth and subsequent sons were often named after father or mother’s brothersFirst Born Daughter – named for the maternal grandmotherSecond Born Daughter – named for the paternal grandmotherThird Daughter – named for the mother – unless she shares a name with one of the grandmothersSubsequent daughters were generally named for mother or father’s sisters In addition, if one of the first three children died, the next baby born of the same sex was given that name so that the name would live on for future generations.

Add to this the diminutives of names. For instance: Ellen, Helen, and Eleanor are often used interchangeably. The Forgotten Federal Census of 1885 Can Be Found Online for Free. Census and population records have long been a vital component of genealogy research. Those of us researching the U.S. have come to count on the decennial federal census to provide a generous amount of information about our ancestors, even if it is not always as accurate as we’d like. And (aside from the 1890 census that was destroyed in an unfortunate and somewhat mysterious series of events) these records are easily accessible online and widely used. But there is federal census that most family historians have never even heard of, and it happens to provide information on a key period of time in America’s history. Make Instant Discoveries in Your Family Tree Now Imagine adding your family tree to a simple website and getting hundreds of new family history discoveries instantly.

Family Tree Researcher: Dictionary of Old Occupations - Index. Introduction to Jane's Dictionary of Old Occupations Click the thumbnail to view the book cover full size. Welcome to my dictionary of old occupations, jobs, archaic trades and similar historical terms. In the course of my research work as a family tree professional I naturally come across many historic records showing job titles, terms or occupations which are no longer in common use. How To Use WorldCat For Your Genealogy Research. Preserving Old Family Letters - MyHeritage Blog. EASY Digital Filenaming to Organize Genealogy Files - The Family Curator. How I process a downloaded document - Organize Your Family History. Last March, I wrote a post called My digital workflow that detailed what I do with a document I find on the Internet.

But, some of the most-used nicknames are baffling in that they don’t sound like the original names. MICHIGAN FAMILY TRAILS : DIGITAL FOLDER ORGANIZING & NAMING MADE EASY-Updated 3 Apr 2019. No one wants to have to search and search to try to find a document or image that you KNOW you saved to your computer. Historic Indian Territory Law. Donation Confirmation. Donate to Reclaim The Records (General Fund) Genealogy Tip: Finding Your Ancestor’s Photo. Measurement Tools. Ordering the SS-5: 2018 style. Ordering applications from the SSA The issue came up again yesterday, at a talk with the Main Line Genealogy Club in Berwyn, Pennsylvania: just how can we get our hands on the form that was filed by a family member to get a Social Security number?

Scoping the Problem Statement in a Research Report. Dear Editor; Life on the Plains - Remembering the Dust Bowl and Great Depression. Dowsing For Graves & Witching For Water. Now that you have made your dowsing rods, let’s get witching. Foot Shape Ancestry: Everything You Need to Know. Your Immigrant Ancestors & Ellis Island Name Changes – Fact or Fiction? It is very likely that you or someone you know has heard an old story passed down through generations that goes like this: An immigrant ancestor arrived in New York with nothing but a bag, a determined attitude, and a name that an Ellis Island immigration inspector found difficult to understand let alone spell.

With the stroke of a pen, the inspector changed Hervik to Harwick or Anestis to Ernest. Research Our Records. The Homestead Act of 1862. Civil War Photo Sleuth. How I process a downloaded document - Organize Your Family History. CHEAT SHEET Google Books for Genealogy. CHEAT SHEET Metadata for Digital Images. Welcome to Irish Genealogy - Irish Genealogy.

Obituaries - The Ancestor Hunt. Transcript beta 112 - forum.jacobboerema.nl. What you should know about the history of your Irish surname. The story behind Ireland’s beloved artifacts. Your Irish Genealogy Questions, Answered. How to Store a Family Bible - The SpareFoot Blog. Treasuries of Family Traditions. Internet Archive: Digital Library of Free Books, Movies, Music & Wayback Machine. 40,000 Irish fought for the Confederate Army in the US Civil War. Irish wedding traditions, customs and superstitions. Walking Where Ancestors Walked: Travelers Give High Marks to First Genealogy Tour. How to Let Go of Sentimental Items: 7 Easy Steps Using Photographs.