Risk aversion. Risk aversion is a concept in economics and finance, based on the behavior of humans (especially consumers and investors) while exposed to uncertainty to attempt to reduce that uncertainty. 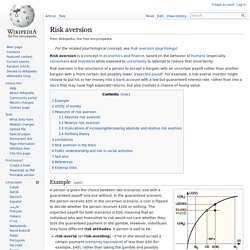 Risk aversion is the reluctance of a person to accept a bargain with an uncertain payoff rather than another bargain with a more certain, but possibly lower, expected payoff. For example, a risk-averse investor might choose to put his or her money into a bank account with a low but guaranteed interest rate, rather than into a stock that may have high expected returns, but also involves a chance of losing value. Example[edit] Utility function of a risk-averse (risk-avoiding) individual.

Utility function of a risk-neutral individual. Utility function of a risk-affine (risk-seeking) individual. A person is given the choice between two scenarios, one with a guaranteed payoff and one without. The average payoff of the gamble, known as its expected value, is $50. Utility of money[edit] ). Where and. . , and when . The 12 cognitive biases that prevent you from being rational.

Confirmation bias. Confirmation bias, also called confirmatory bias or myside bias,[Note 1] is the tendency to search for, interpret, favor, and recall information in a way that confirms one's preexisting beliefs or hypotheses, while giving disproportionately less consideration to alternative possibilities.[1] It is a type of cognitive bias and a systematic error of inductive reasoning. 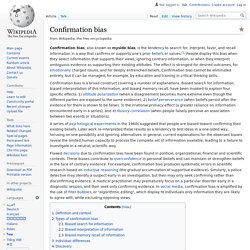 People display this bias when they gather or remember information selectively, or when they interpret it in a biased way. The effect is stronger for emotionally charged issues and for deeply entrenched beliefs. People also tend to interpret ambiguous evidence as supporting their existing position. A series of experiments in the 1960s suggested that people are biased toward confirming their existing beliefs. Later work re-interpreted these results as a tendency to test ideas in a one-sided way, focusing on one possibility and ignoring alternatives. Types[edit] Confirmation biases are effects in information processing.

Confirmation Bias. The Misconception: Your opinions are the result of years of rational, objective analysis. 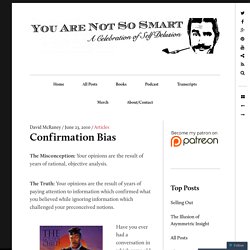 The Truth: Your opinions are the result of years of paying attention to information which confirmed what you believed while ignoring information which challenged your preconceived notions. Have you ever had a conversation in which some old movie was mentioned, something like “The Golden Child” or maybe even something more obscure? You laughed about it, quoted lines from it, wondered what happened to the actors you never saw again, and then you forgot about it. Until… You are flipping channels one night and all of the sudden you see “The Golden Child” is playing.

What is happening here? Selective attention test. 5 Ways Your Brain Tricks You into Sticking With Bad Habits. Bad habits can ruin your life. 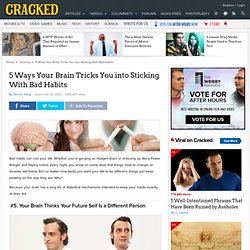 Whether you're gorging on Haagen-Dazs or dressing up like a Power Ranger and flaying hobos every night, you know on some level that things have to change, or disaster will follow. But no matter how badly you want your life to be different, things just keep plowing on the way they are. Why? Category:Psychological theories. 10 Psychological Principles to Design With. Design is most effective when executed with knowledge of psychology. 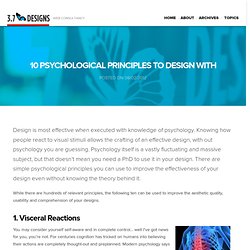 Knowing how people react to visual stimuli allows the crafting of an effective design, with out psychology you are guessing. Psychology itself is a vastly fluctuating and massive subject, but that doesn’t mean you need a PhD to use it in your design. There are simple psychological principles you can use to improve the effectiveness of your design even without knowing the theory behind it.

While there are hundreds of relevant principles, the following ten can be used to improve the aesthetic quality, usability and comprehension of your designs. 1. The first emotional reactions originate in the central nervous system. You may consider yourself self-aware and in complete control… well I’ve got news for you, you’re not.

Not only are old brain signals faster than conscious thought, they influence us with out our knowledge (ie: visceral reactions are subconscious.) 2. 3. 4. 5. 6. 7. Five Psychological Principles Everyone Should Know and Use. - Monday, 17th August 2009 at 4Hoteliers. Hospitality is about a 'customer-centric' mindset: Five, easy-to-learn principles can help professionals to live this mindset. 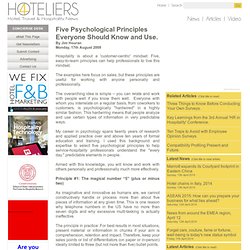 The examples here focus on sales, but these principles are useful for working with anyone personally and professionally. The overarching idea is simple -- you can relate and work with people well if you know them well. Everyone with whom you interrelate on a regular basis, from coworkers to customers, is psychologically "hardwired" in a highly similar fashion. This hardwiring means that people analyze and use certain types of information in very predictable ways.