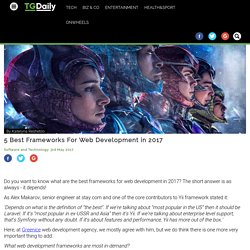 The short answer is as always - it depends! As Alex Makarov, senior engineer at stay.com and one of the core contributors to Yii framework stated it: ‘Depends on what is the definition of “the best”. If we’re talking about “most popular in the US” then it should be Laravel. If it’s “most popular in ex-USSR and Asia” then it’s Yii. Here, at Greenice web development agency, we mostly agree with him, but we do think there is one more very important thing to add: What web development frameworks are most in-demand? It is important to know which technologies are most preferred for commercial use as it gives us an idea of, what specialists are most sought after.

Most In-Demand PHP Frameworks at Upwork It is also worth mentioning that PHP tops the list of the most in-demand skills at Upwork. And here are the first five contestants: LaravelCodeigniterYiiSymfonyCakephp. WordPress: The smart person's guide. In 1440 Johannes Gutenberg invented the printing press. 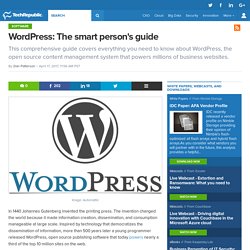 The invention changed the world because it made information creation, dissemination, and consumption manageable at large scale. Inspired by technology that democratizes the dissemination of information, more than 500 years later a young programmer released WordPress, open source publishing software that today powers nearly a third of the top 10 million sites on the web. WordPress is not the letterpress. But the analogues are similar, and because the platform is relied on by millions of businesses it's hard to overstate its impact. Python vs. Ruby: Which is best for web development? Python and Ruby are among some of the most popular programming languages for developing websites, web-based apps, and web services. 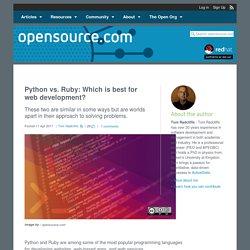 In many ways, the two languages have a lot in common. Visually they are quite similar, and both provide programmers with high-level, object-oriented coding, an interactive shell, standard libraries, and persistence support. However, Python and Ruby are worlds apart in their approach to solving problems because their syntax and philosophies vary greatly, primarily because of their respective histories. What Creativity in Marketing Looks Like Today. What makes marketing creative? 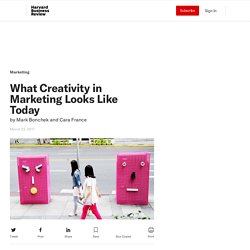 Is it more imagination or innovation? Is a creative marketer more artist or entrepreneur? Historically, the term “marketing creative” has been associated with the words and pictures that go into ad campaigns. But marketing, like other corporate functions, has become more complex and rigorous. Marketers need to master data analytics, customer experience, and product design. HTMLGoodies Slideshows. 7 Creative Ways To Revamp Your Content Marketing. Log In - New York Times. Forbes Welcome. Forbes Welcome. I Used Social Media and Blogging to Become Famous for Nothing. In 2006, I set out to brand myself. 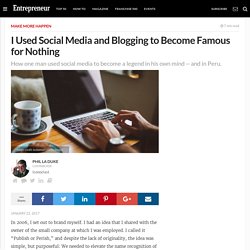 I had an idea that I shared with the owner of the small company at which I was employed. I called it “Publish or Perish,” and despite the lack of originality, the idea was simple, but purposeful: We needed to elevate the name recognition of our company -- quickly. The company had made a fortune working with a niche client, but unwisely, it chose to fly under the competition’s radar. In other words, it did the opposite of marketing for fear that if competitors knew how much money it was making from this niche client, it would face stiffer competition.

So naturally, after years of this “guerilla obfuscation,” the niche client business dried up and now left the little-firm-that-couldn’t struggling to sell its wares to prospects who knew nothing of our work, history and values, or even if we could deliver on our promises. Publish, perish and politics. Related: Why Your Small Business Must Start a Blog I resisted, of course. Press and public speaking. Forbes Welcome. 7 Ways to Earn More with Affiliate Marketing in 2017. In today’s digital marketing world, there are many ways to earn a living from working at home. 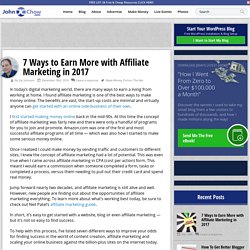 I found affiliate marketing is one of the best ways to make money online. The benefits are vast, the start-up costs are minimal and virtually anyone can get started with an online side-business of their own. I first started making money online back in the mid-90s. At this time the concept of affiliate marketing was fairly new and there were only a handful of programs for you to join and promote. Amazon.com was one of the first and most successful affiliate programs of all time — which was also how I started to make some serious money online.