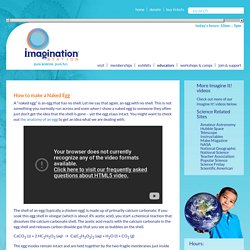 In just a short while, you should see some bubbles appearing on the outside of the egg. These are bubbles of carbon dioxide gas from the reaction. It can take 12-24 hours before a good portion of the shell is removed. A good sign of progress is a white frothy scummy layer on the top of the surface of the vinegar. After a day of soaking you can carefully remove the egg from the vinegar. At this point you may be able to literally rub the shell off the egg with your fingers. After two days of soaking you should have a pretty cool Naked Egg. Fun things to do with your naked eggs Naked eggs are cool, but experimenting with them is even cooler. If you want to see your egg get really big, simply put it in a cup filled with water. You can even color the inside of your egg if you soak it in some water with food coloring. Shrink your Egg. Celebrating Mister Rogers.

Register For Summer Camps in Austin Now! Won't You Be My Neighbor? Movie. For over thirty years, Fred Rogers, an unassuming minister, puppeteer, writer and producer was beamed daily into homes across America. 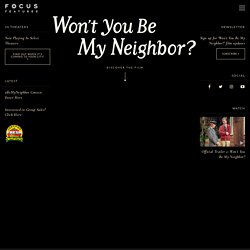 In his beloved television program, Mister Rogers’ Neighborhood, Fred and his cast of puppets and friends spoke directly to young children about some of life’s weightiest issues, in a simple, direct fashion. There hadn’t been anything like Mr. Junlei Li on return on investment “we tend to value children for what they will become (vs) what they are right now” @PA_ELIC…

After studying 500 millionaires, a journalist noticed one characteristic they all had in common. Why You Should Encourage Kids to be Rule Breakers. The Rich Dad blogs by Kim and Robert Kiyosaki. As a young man, I knew that school was not for me. 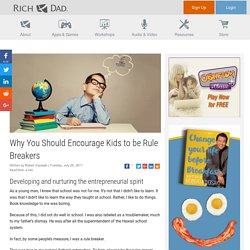 It’s not that I didn’t like to learn. It was that I didn’t like to learn the way they taught at school. Rather, I like to do things. Book knowledge to me was boring. Because of this, I did not do well in school. In fact, by some people’s measure, I was a rule breaker. This was true in my natural father’s estimation. Unfortunately, none of these “good” things did him any good. The rich dad difference My best friend’s dad was my rich dad. Where my poor dad would say, “We can’t afford that,” my rich dad would ask, “How can I afford that?” 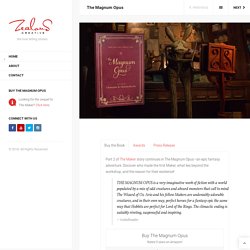 Discover who made the first Maker, what lies beyond the workshop, and the reason for their existence! THE MAGNUM OPUS is a very imaginative work of fiction with a world populated by a mix of odd creatures and absurd monsters that call to mind The Wizard of Oz. Ario and his fellow Makers are undeniably adorable creatures, and in their own way, perfect heroes for a fantasy epic the same way that Hobbits are perfect for Lord of the Rings. The climactic ending is suitably riveting, suspenseful and inspiring. The above reviews come from Amazon Services LLC. The Magnum Opus has received the following accolades. Independent Publisher Book Awards Young AdultDistinguished Favorite Los Angeles Book Festival Young AdultHonorable Mention. 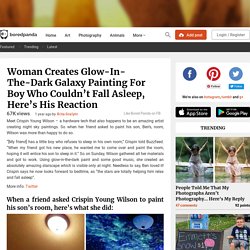 So when her friend asked to paint his son, Ben’s, room, Wilson was more than happy to do so. Show Full Text “[My friend] has a little boy who refuses to sleep in his own room,” Crispin told Buzzfeed. “When my friend got his new place, he wanted me to come over and paint the room, hoping it will entice his son to sleep in it.” So on Sunday, Wilson gathered all her materials and got to work. More info: Twitter.