Science with NOAA Research: Ocean Currents. Climate and Currents Lesson Plan. In Deep Water: Will Essential Ocean Currents Be Altered by Climate Change? [Slide Show] Every second, a vast quantity of cold, dense seawater equal to six times the combined flow of every land river on Earth streams over an ocean-floor ridge that stretches between Greenland and Scotland. 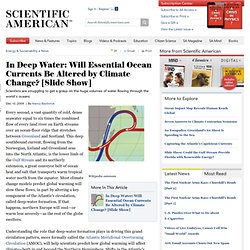 This deep southbound current, flowing from the Norwegian, Iceland and Greenland seas into the North Atlantic, is the lower limb of the Gulf Stream and its northerly extension, a great conveyor belt of ocean heat and salt that transports warm tropical water north from the equator. Most climate change models predict global warming will slow these flows, in part by altering a key component of the Atlantic's circulation, called deep-water formation. If that happens, northern Europe will cool—or warm less severely—as the rest of the globe swelters. Oceanographers have been using moored acoustic Doppler current profilers and temperature sensors for the last decade to measure deep water as it pours over the Greenland–Scotland Ridge on its way south.

But it's not that simple. Ocean Currents and Climate. Mass flows of water, or currents, are essential to understanding how heat energy moves between the Earth’s water bodies, landmasses, and atmosphere. 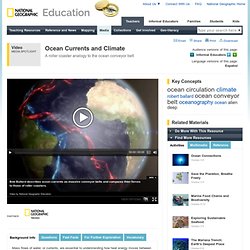 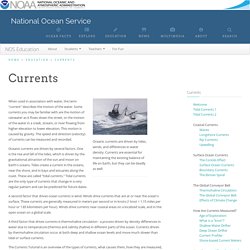 Currents are essential for maintaining the existing balance of life on Earth, but they can be deadly as well. Oceans, Weather, and Climate. The ocean covers more than 70 percent of the Earth’s surface. 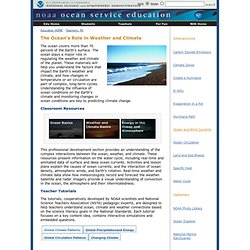 The ocean plays a major role in regulating the weather and climate of the planet. These materials will help you understand the factors that impact the Earth's weather and climate, and how changes in temperature or air circulation are part of complex, long-term cycles. Ocean Currents and Global Climate Lessons. Investigation 5 - Seafloor Topography. Overview: In this 3-4 day investigation, students will develop an understanding of the two basic ways seafloor topography influences ocean circulation patterns, steering ocean flows and providing barriers to deep water mixing. 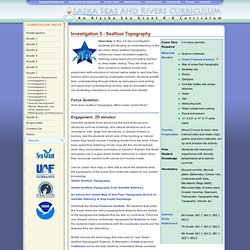 They will draw and then construct a seafloor model and experiment with solutions of colored saline water to see how they behave when encountering underwater barriers. Students solidify their understanding through follow-up discussions and writing, and apply their understanding as they view an animated video clip illustrating interactions of ocean currents and climate. 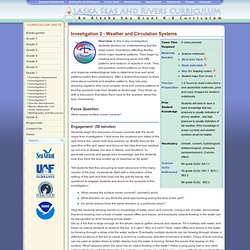 They begin by creating and observing wave and riffle patterns and motions of objects in a tub. They plot possible current patterns on their map and organize meteorological data to determine how well wind patterns match their predictions. After a lecture/discussion to learn more about currents and weather patterns, they role-play shipping captains who must consider wind and current patterns to find the quickest route from Seattle to Anchorage. They finish up with a discussion that takes them back to the question about the toys’ movements. Focus Question: Tracking a Hurricane. Hurricane Tracking from a Safe Distance The Story You are a hurricane expert. 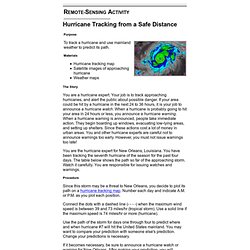 Your job is to track approaching hurricanes, and alert the public about possible danger. If your area could be hit by a hurricane in the next 24 to 36 hours, it is your job to announce a hurricane watch. When a hurricane is probably going to hit your area in 24 hours or less, you announce a hurricane warning. You are the hurricane expert for New Orleans, Louisiana. Track A Hurricane Activity. Return to activity index Hurricanes are born of tropical waters where trade winds meet and make air swirl. 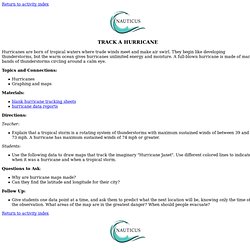 They begin like developing thunderstorms, but the warm ocean gives hurricanes unlimited energy and moisture. A full-blown hurricane is made of many bands of thunderstorms circling around a calm eye. Hurricanes and Their Tracks. Lab 5: It's All Connected: Global Circulation. The lab activity described here was adapted by Erin Bardar of TERC for the EarthLabs project. 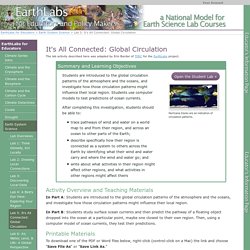 JetStream - An Online School for Weather. Ice continued to cling to the Great Lakes in mid-March, 2014. 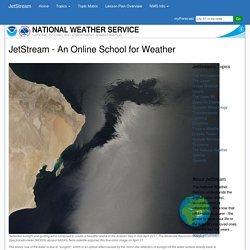 The Moderate Resolution Imaging Spectroradiometer (MODIS) aboard NASAs Aqua satellite flew over the region on and captured a false-color image of the icy scene on March 18. As of March 17, according to the National Oceanic and Atmospheric Administration (NOAA), 82.8 % of the Great Lakes remained ice-covered. That sets a new record high for this late in the season, after 35 years of record keeping. The previous mid-March ice cover high, 75.85% covered, was set on March 15, 1978. The ice cover peaked this year at 92.2 % on March 6, according to NOAAs Great Lakes Environmental Research Laboratory (GLERL).

This false-color image uses a combination of shortwave infrared, near infrared and red (MODIS bands 7,2,1) to help distinguish ice from snow, water and clouds. Credit: Jeff Schmaltz, MODIS Land Rapid Response Team, NASA GSFC Click to enlarge. Welcome to JetStream, the National Weather Service Online Weather School. Investigation 4 - Temperature and Salinity. Overview: Overview: In this 7-9 day investigation, students are engaged in a variety of hands-on demonstrations and experiments that will help them to understand thermohaline circulation in the ocean. They begin with an introductory activity that helps them to review or arrive at a definition of density, then go on to demonstrate the effects of temperature and salinity on density and design their own experiment to simulate ocean mixing.

Season, Lunar Cycle, and Tides Unit Plan. Moon Phases. What Causes The Phases Of The Moon? The following image is from the Visual Dictionary Online. It says, "Changes in the Moon’s appearance over the course of a month; result from the movement of the Moon in relation to the Sun, as seen from Earth. " The next image is from moonconnection.com, and it's a little more descriptive. The illustration may look a little complex at first, but it's easy to explain. Sunlight is shown coming in from the right. Examine the phases of the moon from Earth and space. Learn About The Phases Of The Moon. MoonMatch. LUNAR PHASES. Oreo Moon Phases.

Moon Articles. Small Moon Big Sun. ECLIPSES. Lab - Phases and Eclipses. Modeling Eclipses. Build a Solar Eclipse Viewer. NASA - Ocean Motion. For centuries, mariners have relied on ocean surface currents. Explorers rode them to discover new lands. Merchants counted on them to speed the transport of goods to market. Today understanding ocean surface currents is as important as ever. People study currents to select the most fuel efficient path for ships, win sailboat races, track pollution such as oil spills, assist in search and rescue operations and determine the best location for catching fish. Yet ocean surface currents also play a larger role in shaping our world. Lunar and Solar Tides. Tides cause daily changes in water level in many coastal areas. Factors such as local topography and weather contribute to the timing and height of tides, but the primary reason for tides is the gravitational attraction between liquid water on the Earth and the Moon.

All objects on Earth experience tidal forces. However, the effect is most pronounced with water because, as a liquid, it is more easily deformed by gravity when compared to solid objects. Investigating the Causes of Tides. Tides. Islands Live Teacher's Guide - Tides & Lunar Cycles. Investigation 3 - Waves and Tides. Tides Simulation. Virtual Lab - The Moon and Tides. Plotting Ocean Tides. How Does the Moon Affect the Tides? TidesActivity. Predicting the Tides. Moon Phases, Tides, and D-Day. The Tides of War. Eisenhower and D-Day. HowStuffWorks - Tidal Currents. Learn about Tides, Ocean Currents and Waves. Great Pacific Garbage Patch. NOAA Tides and Currents Map.