Sea Shepherd Conservation Society. Bounty Main. Mass extinction for Earth’s oceans probable, comprehensive study says. Water in situ. Here’s all the plastic in the ocean, measured in whales. Let’s see how closely you know your marine doom-and-gloom: Just how much plastic can be found in the oceans? 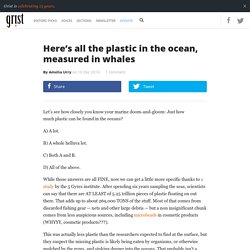 A) A lot. B) A whole helluva lot. C) Both A and B. D) All of the above. While those answers are all FINE, now we can get a little more specific thanks to a study by the 5 Gyres institute. This was actually less plastic than the researchers expected to find at the surface, but they suspect the missing plastic is likely being eaten by organisms, or otherwise mulched by the gyres, and sinking deeper into the oceans. Earth Nouveau. New Earth Space. New Sciences. SCIENCE. Earth Scientia. Land Water BioMass. Recycle Reuse. Eco Problems. Rosetta fuels debate on origin of Earth’s oceans / Rosetta. First measurements of comet’s water ratio Rosetta fuels debate on origin of Earth’s oceans 10 December 2014 ESA’s Rosetta spacecraft has found the water vapour from its target comet to be significantly different to that found on Earth. 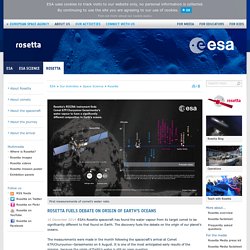 The discovery fuels the debate on the origin of our planet’s oceans. The measurements were made in the month following the spacecraft’s arrival at Comet 67P/Churyumov–Gerasimenko on 6 August. Comet on 20 November – NavCam. Marine garbage patches. Marine garbage patches. Eight Beaches Where Strange Things Wash Ashore. Dead Horse Bay, Brooklyn (photograph by the author) For those with the beachcombing drive, even the most average-looking stretch of sand holds allure. 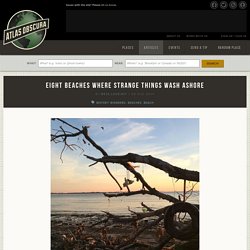 But while collecting rocks and shells is nice, some beaches are home to more unusual objects. Below is a selection of beaches known for strange debris, and some of the more remarkable objects that have washed ashore: DEAD HORSE BAYBrooklyn, New York Horse bone at Dead Horse Bay (photograph by the author) Once home to a garbage dump and several horse rendering plants (hence the name), the beach at Dead Horse Bay is now embedded with pre-1950s glass bottles, broken china, cosmetics containers, leather goods, and children’s toys, plus bones and teeth from the carriage horses that once plied New York City’s streets. What can 28,000 rubber duckies lost at sea teach us about our oceans?

In 1992, a shipping crate containing 28,000 plastic bath toys was lost at sea when it fell overboard on its way from Hong Kong to the United States. 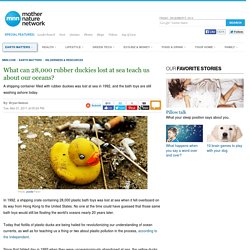 No one at the time could have guessed that those same bath toys would still be floating the world's oceans nearly 20 years later. Today that flotilla of plastic ducks are being hailed for revolutionizing our understanding of ocean currents, as well as for teaching us a thing or two about plastic pollution in the process, according to the Independent. Since that fabled day in 1992 when they were unceremoniously abandoned at sea, the yellow ducks have bobbed halfway around the world.

Some have washed up on the shores of Hawaii, Alaska, South America, Australia and the Pacific Northwest; others have been found frozen in Arctic ice. Still others have somehow made their way as far as Scotland and Newfoundland, in the Atlantic. The mystery of the inscribed rubber-like blocks that keep washing up on to Europe’s beaches. One of hundreds of Tjipetir planks washes ashore on a European beach. 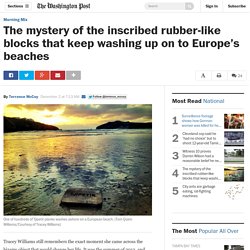 (Tom Quinn Williams/Courtesy of Tracey Williams) Tracey Williams still remembers the exact moment she came across the bizarre object that would change her life. Did these chunks of rubber go down with the Titanic? Mystery surrounds fragments - which first started washing up two years agoLast week more than 100 pieces were deposited on Chesil Beach in DorsetIdentical 'Tjipetir' engraved tablets have appeared all over Northern EuropeTjipetir was a 20th centruy rubber plantation in West Java, IndonesiaSome believe the pieces come from wreck of the Titanic - which sunk in 1912 By Jack Crone for MailOnline Published: 13:58 GMT, 10 November 2014 | Updated: 17:18 GMT, 10 November 2014. 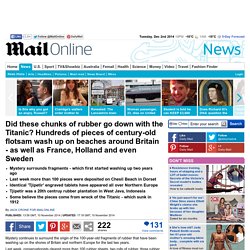 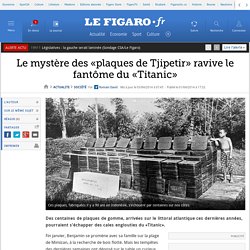 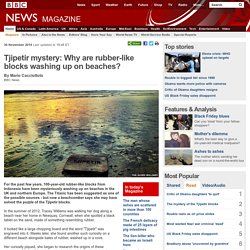 The Titanic has been suggested as one of the possible sources - but now a beachcomber says she may have solved the puzzle of the Tjipetir blocks. In the summer of 2012, Tracey Williams was walking her dog along a beach near her home in Newquay, Cornwall, when she spotted a black tablet on the sand, made of something resembling rubber.

It looked like a large chopping board and the word "Tjipetir" was engraved into it. Weeks later, she found another such curiosity on a different beach alongside bales of rubber, washed up in a cove. Her curiosity piqued, she began to research the origins of these mysterious blocks. MIYAZAKI MARU OCEAN LINER 1909-1917. WRECKSITE.