Advertising on the Brain. The concept that advertising affects the brain is almost tautological. 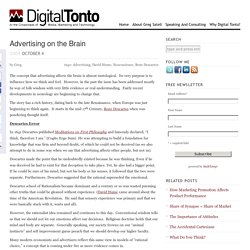 Its very purpose is to influence how we think and feel. However, in the past the issue has been addressed mostly by way of folk wisdom with very little evidence or real understanding. Fairly recent developments in neurology are beginning to change that. The story has a rich history, dating back to the late Renaissance, when Europe was just beginning to think again. This Is Your Brain On Ads: An Internal 'Battle' For decades, social scientists have tried to determine how TV advertising affects the children and teenagers who watch them. 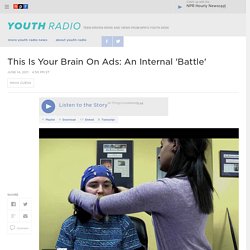 Do commercials make kids more materialistic? Are fast-food ads responsible for childhood obesity rates? What To Know About Using Colors In The Classroom. I have aversions to certain colors. 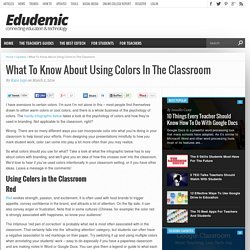 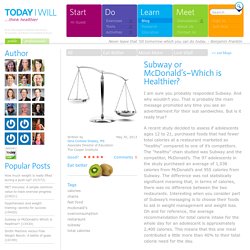 I am sure you probably responded Subway. And why wouldn’t you. Nearly 70% of Food Ads on Nickelodeon are for Junk. Modest Improvement Not Sufficient, Given Kids’ Obesity Rates, Says CSPI March 21, 2013 Nearly 70 percent of the food ads during SpongeBob SquarePants, Teenage Mutant Ninja Turtles, Fairly Odd Parents, iCarly, and other popular children's shows on the Nickelodeon network are for junk foods, according to the Center for Science in the Public Interest. 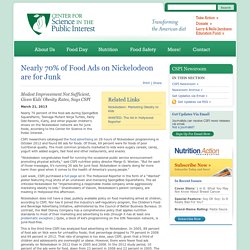 CSPI researchers catalogued the food advertising on 28 hours of Nickelodeon programming in October 2012 and found 88 ads for foods. Of those, 69 percent were for foods of poor nutritional quality. The most common products marketed to kids were sugary cereals, candy, yogurt with added sugars, fast food and other restaurants, and snacks. Advertising, Impulse Purchases & Decision-Making. Advertisements are all around us, and they vary greatly in their attempts to attract consumers. 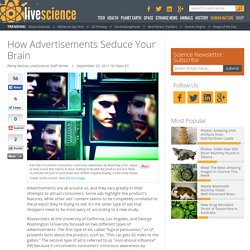 Some ads highlight the product's features, while other ads' content seems to be completely unrelated to the product they're trying to sell. It's the latter type of ads that shoppers need to be most wary of, according to a new study. Researchers at the University of California, Los Angeles, and George Washington University focused on two different types of advertisements. Neuroscience For Kids. The smell of a flower - The memory of a walk in the park - The pain of stepping on a nail. 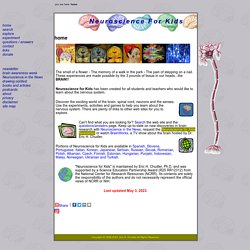 These experiences are made possible by the 3 pounds of tissue in our heads...the BRAIN!! Neuroscience for Kids has been created for all students and teachers who would like to learn about the nervous system. Discover the exciting world of the brain, spinal cord, neurons and the senses. Use the experiments, activities and games to help you learn about the nervous system. There are plenty of links to other web sites for you to explore. What Is Science. What Is Science? 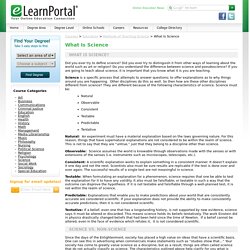 Did you ever try to define science? Did you ever try to distinguish it from other ways of learning about the world such as art or religion? Consumer Science Projects. The Science Life: Bulletin Boards Galore! I finished the three main bulletin boards that are in my classroom over the weekend! 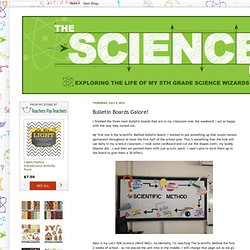 I am so happy with the way they turned out. My first one is the Scientific Method bulletin board. I wanted to put something up that would remain permanent throughout at least the first half of the school year. This is something that the kids will use daily in my science classroom. I took some cardboard and cut out the shapes (well, my buddy Deanna did...) and then we painted them with just acrylic paint.

Scientific Method Foldable. January is when my grade level focuses on the scientific method. 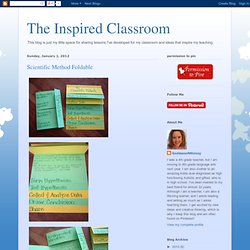 My class will do several class experiments together, practicing, but in just a couple of weeks, my students will be partnered into groups of 3 to do a science fair experiment for our school science fair. Not all of the 4 grades at my school will do this. Advertising Techniques. Media Literacy Science Lesson Plan Ideas.