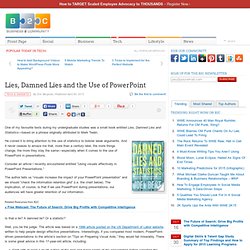 He coined it to bring attention to the use of statistics to bolster weak arguments. And it never ceases to amaze me that, more than a century later, the more things change, the more they stay the same—especially when it comes to the use of PowerPoint in presentations. Consider an article I recently encountered entitled “Using visuals effectively in PowerPoint Presentations.” Web.eecs.umich.edu/~imarkov/slides.txt. From the Wall Street Journal, April 26, 2000 What's Your Point, Lieutenant? 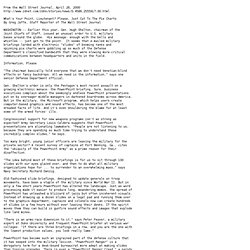 Please, Just Cut To The Pie Charts By Greg Jaffe, Staff Reporter of The Wall Street Journal WASHINGTON -- Earlier this year, Gen. Hugh Shelton, chairman of the Joint Chiefs of Staff, issued an unusual order to U.S. military bases around the globe. His message: enough with the bells and whistles -- just get to the point. It seems that e-mailed military briefings larded with electronic "slides" of booming tanks and spinning pie charts were gobbling up so much of the Defense Department's classified bandwidth that they were slowing more-critical communications between headquarters and units in the field.

B. 1. 2. 3. 4. As information gets passed up an organization hierarchy, from people who do analysis to mid-level managers to high-level leadership, key explanations and supporting information is filtered out. At many points during its investigation, the Board was surprised to receive similar presentation slides from NASA officials in place of technical reports. Wired 11.09: PowerPoint Is Evil. PowerPoint Is Evil Power Corrupts.PowerPoint Corrupts Absolutely. 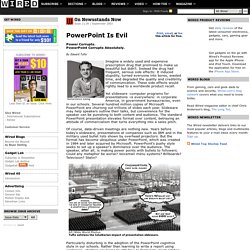 By Edward Tufte Imagine a widely used and expensive prescription drug that promised to make us beautiful but didn't. Instead the drug had frequent, serious side effects: It induced stupidity, turned everyone into bores, wasted time, and degraded the quality and credibility of communication. These side effects would rightly lead to a worldwide product recall. Yet slideware -computer programs for presentations -is everywhere: in corporate America, in government bureaucracies, even in our schools. Of course, data-driven meetings are nothing new. Particularly disturbing is the adoption of the PowerPoint cognitive style in our schools. In a business setting, a PowerPoint slide typically shows 40 words, which is about eight seconds' worth of silent reading material. Consider an important and intriguing table of survival rates for those with cancer relative to those without cancer for the same time period.

And Better Techniques for Technical Reports. Central Command Charts Sharp Movement of the Civil Conflict in Iraq Toward Chaos By MICHAEL R. 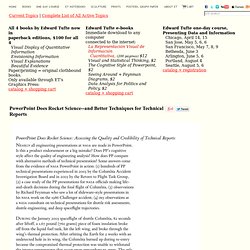 GORDON, The New York Times Published: November 1, 2006 See the NYT news story here Here are some preliminary comments on the slide "Iraq: I&W of Civil Conflict. " It appears that "I&W" means "Indications and Warnings. " Only this single slide was leaked (by the military? Doing competent political analysis, epidemiology, nation-building, and war planning (all of which they're trying to do) in a chaotic situation is impossible, and not much good social science and epidemiology can be expected in chaos and from a military entangled in Iraq. The slide reports performance data--a list of phrases, with each phrase accompanied by a measure of performance. There is no cloud of uncertainty or error history associated with the editorializing color. The list style, surely one damn thing after another here, is merely descriptive and thus preliminary to policy analysis. -- Edward Tufte. 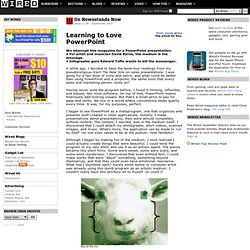 A while ago, I decided to base the book-tour readings from my pseudoreligious tract The New Sins on sales presentations. I was going for a fair dose of irony and satire, and what could be better than using PowerPoint and a projector, the same tools that every sales and marketing person relies on? Having never used the program before, I found it limiting, inflexible, and biased, like most software. On top of that, PowerPoint makes hilariously bad-looking visuals.

I began to see PowerPoint as a metaprogram, one that organizes and presents stuff created in other applications. Although I began by making fun of the medium, I soon realized I could actually create things that were beautiful. "This is Dan Rather's profile. Previous Story: Wingman.