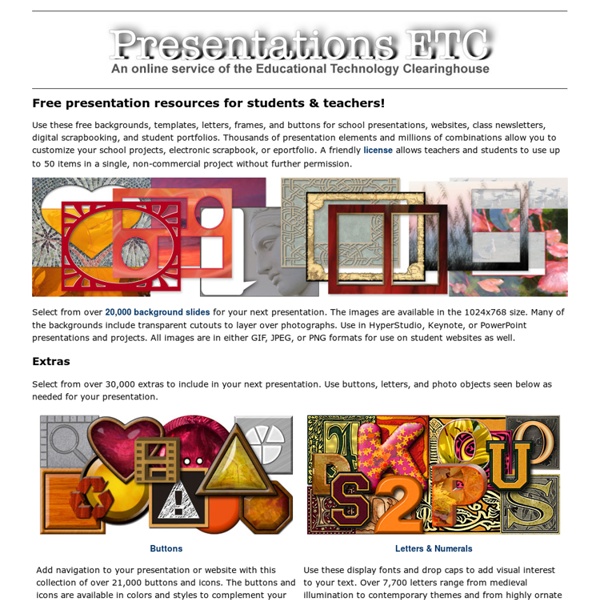 Use these free backgrounds, templates, letters, frames, and buttons for school presentations, websites, class newsletters, digital scrapbooking, and student portfolios. Thousands of presentation elements and millions of combinations allow you to customize your school projects, electronic scrapbook, or eportfolio. A friendly license allows teachers and students to use up to 50 items in a single, non-commercial project without further permission. Select from over 20,000 background slides for your next presentation. Extras Select from over 30,000 extras to include in your next presentation. Themes and templates

PowerPoint Templates, PowerPoint Slides and Presentation Icons Animated cogs PowerPoint Template This is an animated version of our Cogs Clip Art. The teeth have been animated so that the wheels move round. This could be used to demonstrate the action of gears and gearing. There is even an example that shows what happens when you do not have your gearing ratios correctly aligned. Inbuilt slides If you liked this PowerPoint Template we would appreciate some feedback on how you will use it. 15 February 2010 Template number 00370 Filed under Animated, Educational , black , speed , teeth You can browse all of our PowerPoint templates or select them by category or colour or by tag. Related Pages We'd love it if you could link back to us on your blog. <a href=" >Animated cogs</a>

fppt.com - 3050+ Free Powerpoint Templates Stache - A smarter way to bookmark web pages for Mac, iPhone and iPad PowerPoint Templates Are you a PowerPoint presenter? Then you already know how important it is for both you and your slides to look professional while presenting. You may also know that the quickest and easiest way to make your PowerPoint slides look professional is to use templates that have been created by professional presentation designers. But you may not know that CrystalGraphics – that’s us – offers and sells more professionally-designed PowerPoint slides and templates than anyone else in the world. And the quality of the templates is top notch. That’s why PowerPlugs: Templates for PowerPoint won the Standing Ovation Award for “Best PowerPoint Templates” from Presentations Magazine. But wait, it gets even better! Altogether, this is a $256 value now available directly to you for just $99.

List of English words of Turkic origin This is a list of words that have entered into the English language from the Turkic languages. Many of them came via traders and soldiers from and in the Ottoman Empire. There are some Turkic words as well, most of them entered English via the Russian language. Introduction[edit] Languages of Turkic peoples left numerous traces in different languages, including the English language. The adoption of Indian words, among which there were some Turkic borrowings, became one of the ways for the words of the Turkic origin to penetrate English. In the nineteenth century, Turkic loanwords, generally of Turkish origin, began to penetrate not only through the writings of the travelers, diplomats and merchants, and through the ethnographical and historical works, but also through the press. Most of the Turkic loans in English carry exotic or ethnographical connotations. A[edit] Afshar from Turkic Afshar, "a Turkic tribe living majorly in Kerman province of Iran". Aga Khan Agaluk Airan Akbash Akche Akhissar