Cigarette. A cigarette (/ˌsɪɡəˈrɛt/; from the French word cigarette [siɡaʁɛt], meaning "small cigar")[1] is a small cylinder of finely cut tobacco leaves rolled in thin paper for smoking. The cigarette is ignited at one end and allowed to smoulder; its smoke is inhaled from the other end, which is held in or to the mouth; in some cases a cigarette holder may be used as well. Most modern manufactured cigarettes are filtered and include reconstituted tobacco and other additives.[2] Rates of cigarette smoking vary widely, and have changed considerably over the course of history — since cigarettes were first widely used in the mid-20th century. While rates of smoking have over time leveled off or declined in the developed world, they continue to rise in developing nations.[3][4] Cigarettes carry serious health risks, which are more prevalent than in other tobacco products. History[edit] A reproduction of a carving from the temple at Palenque, Mexico, depicting a Mayan priest smoking from a smoking tube. 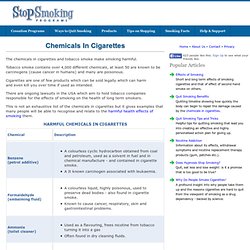 Tobacco smoke contains over 4,000 different chemicals, at least 50 are known to be carcinogens (cause cancer in humans) and many are poisonous. Cigarettes are one of few products which can be sold legally which can harm and even kill you over time if used as intended. There are ongoing lawsuits in the USA which aim to hold tobacco companies responsible for the effects of smoking on the health of long term smokers. This is not an exhaustive list of the chemicals in cigarettes but it gives examples that many people will be able to recognise and relate to the harmful health effects of smoking them. Having read through the list above, do you know what poisons are in cigarettes? Related Information. What's in a Cigarette. What's in a Cigarette & Disease: Chemicals, Cancer and Heart Disease The main ingredient in cigarettes is tobacco. 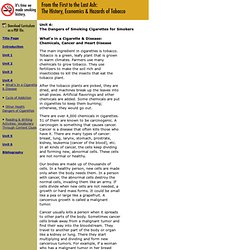 Tobacco is a green, leafy plant that is grown in warm climates. Farmers use many chemicals to grow tobacco. They use fertilizers to make the soil rich and insecticides to kill the insects that eat the tobacco plant. After the tobacco plants are picked, they are dried, and machines break up the leaves into small pieces. There are over 4,000 chemicals in cigarettes. 51 of them are known to be carcinogenic. Our bodies are made up of thousands of cells. Cancer usually kills a person when it spreads to other parts of the body. Chemicals in cigarettes and cigarette smoke are known to cause not only cancer but also other serious health problems.

The Effects Of Cigarette Smoking On The Respiratory System. The major health problems caused by smoking affect the nicotine delivery system: the airways, blood vessels and lungs in the human respiratory system. 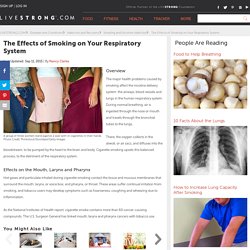 During normal breathing, air is ingested through the nose or mouth and travels through the bronchial tubes to the lungs. There, the oxygen collects in the alveoli, or air sacs, and diffuses into the bloodstream, to be pumped by the heart to the brain and body. Cigarette smoking upsets this balanced process, to the detriment of the respiratory system. Hot gases and particulate inhaled during cigarette smoking contact the tissue and mucous membranes that surround the mouth; larynx, or voice box; and pharynx, or throat. These areas suffer continual irritation from smoking, and tobacco users may develop symptoms such as hoarseness, coughing and wheezing due to inflammation. As the National Institutes of Health report, cigarette smoke contains more than 60 cancer-causing compounds. 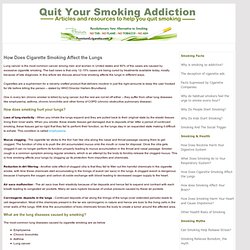 The bad news is that only 12-15% cases are being cured by treatments available today, mostly because of late diagnosis. In this article we discuss about how smoking affects the lungs in different ways. Cigarettes are a euphemism for a cleverly crafted product that delivers nicotine in just the right amounts to keep the user hooked for life before killing the person – stated by WHO Director Harlem Brundtland. One in every ten chronic smoker is killed by lung cancer, but the rest are not let off either – they suffer from other lung diseases like emphysema, asthma, chronic bronchitis and other forms of COPD (chronic obstructive pulmonary disease) How does smoking hurt your lungs? Loss of lung elasticity - When you inhale the lungs expand and they are pulled back to their original state by the elastic tissues lining their inner walls.