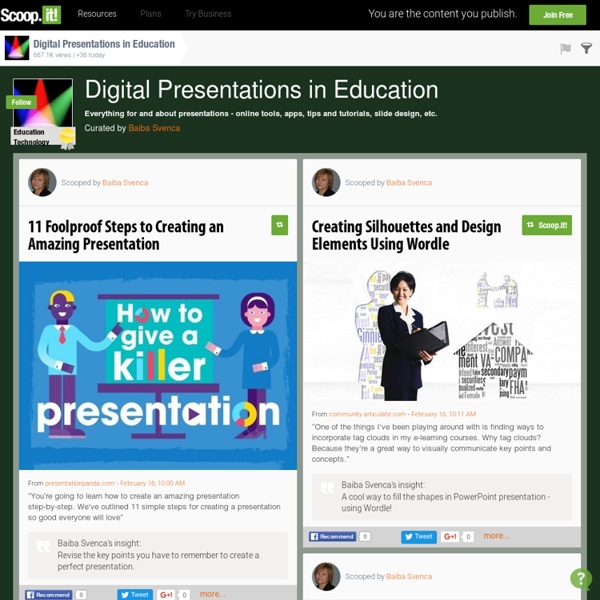 Slate lets you turn anything you want to say – whether it’s a book report, a newsletter or your latest travel adventure – into a beautiful visual story, in minutes. Bring your words and images together, tap on one of the professionally designed, magazine-style themes and beautiful fonts, colors and motion are automatically applied! The good news is, you don’t have to make any complex design decisions. You can just focus on your story.

Five Must-Have Free Visual Marketing Tools by @jessostroff Spin Sucks By Jess Ostroff I’m no artist. And it bothers me sometimes how easy it is for some people to pick up a pen and paper and create a masterpiece. My imagination, unfortunately, just doesn’t work that way. 25 Spectacular Movies You (Probably) Haven't Seen Pt. 2 Human Traffic Very unique comedy about the drug/club culture in the UK. Five friends ponder society, drug use and their own lives as they go about their usual weekend of snorting, smoking, popping, dancing and sex. The Matador

WeChat's money gifting scheme lures 5 million Chinese users Last week WeChat, the popular Chinese messaging app, launched a feature letting users based in China gift money to friends and family. The feature went viral in China, and yesterday parent company Tencent disclosed to Chinese media that during the first two days of Spring festival, over five million users participated in the scheme, exchanging over 20 million envelopes. At its apex, over 121,000 envelopes were sent within a five-minute stretch, during with 585,000 attempts were made by users to snatch one up. Specifically, after binding one’s bank card to the app, users can send cash-filled virtual red envelopes (a traditional gift for the Lunar New Year) one of two ways. Individuals can send cash directly to a recipient, or, if you want to spice things up, senders can put up a set sum of cash that’s then distributed randomly among a specified group of friends.

23 Excellent Professional Development Tools for Teachers Today we are sharing with you some web tools to help you grow professionally. These are probably the best you can ever find online. Check out the list below and share with us your suggestions and additions. 9 tools for creating great animations Creating animations has always been considered as one of the most complex aspects of graphic design that requires specific software and technological expertise. It is a time-intensive activity that requires heavy software and high speed computers. However, over the past few years, the emergence of different online presentation and animation tools have simplified the process of creating animations. Most of these web-based tools are very easy to operate and can create animations that are perfectly suitable for everyday applications. Here we've gathered together some of the best...

3 Tips for Creating Engaging, Visual Experiences This blog post was co-authored with our NEXUS partner, CrowdRiff, a social marketing, analytics and insights platform. When it boils down to it, users are visual. According to Zabisco, 40% of people respond better to visual information than plain text. That’s probably because 90% of information transmitted to the brain is visual, and our brains process visuals 60,000 times faster than text. Looking at the numbers alone, there’s a strong case to be made for visual content. To steer you in the right direction, this blog post goes over three tips for strengthening your visual strategy to nurture customer engagement and generate more on-site conversions.

The Internet Is Making You Smarter, Really In his new book, “Smarter Than You Think,” journalist Clive Thompson argues that the digital revolution – from search engine sophistication to status update proliferation – is actually dovetailing with how the human brain naturally works to make us better thinkers. Thompson is no latter day Cassandra (or, for that matter, Nicholas Carr), warning that new technology will rob us of our capacity to concentrate, create or text in complete sentences. A technology reporter for Wired and The New York Times Magazine, he is an enthusiastic and optimistic cheerleader for new technology. Thompson recently spoke with Digiday about how new technology is changing the way we think, learn and remember – and why that’s a good thing for brands and people alike.

Meet the Aussie young guns that could become the next big thing Finder co-founders Frank Restuccia and Fred Shebesta. Source: Supplied WE all know the Mark Zuckerbergs of the world. But closer to home a new breed of Aussie entrepreneurs are turning their back on traditional jobs, creating their own ventures and killing it online.

Finding the Right Tool WebTools4U2Use will introduce you to a lot of different, powerful, useful tools.But... how do you choose the right one? By Task This mindmap by Toy Waterman provides a basic list of webtools from which to choose those most appropriate to different kinds of classroom activities. Click on the + near each type of activity to see some of the best tools for that task. (Click and drag the image in the box to reveal more.) Stamplay: An Easy, IFTTT-like Way to Create Web apps While growing numbers of children learn to code in school, if not in kindergarten, there’s still a lot of we grown-ups whose skills are rudimentary at best and don’t go much farther than basic HTML editing. Although creating sophisticated software and understanding encapsulation, inheritance, and polymorphism will most probably remain unreachable for many of us, there are still some easier things that non-developers can do. One of the products that can significantly ease creation of simple web applications is Stamplay, a recent Seedcamp alumni that is working on what the company calls “IFTTT for apps.” Living up to this comparison, the service allows anyone to near-instantly build an application in the cloud using Lego-like modules with all the complicated back-end stuff being taken care of automatically. Working remarkably like IFTTT, Stamplay lets users to first choose the modules they want to work with — for example, “User,” “Email,” and “Form.” ➤ Stamplay

Designer Creates Cute Animated Job Application To Get An Interview With Ogilvy Based in Dubai, art director and designer Saaniya Abbas has created an adorable animated job application for a position at renowned advertising agency Ogilvy & Mather. Featuring a cute egg-shaped character that represents Abbas, the website that houses this creative application is cheekily named “Yologilvy”—in addition to the application, she has also included her personal branding identity, CV and portfolio on the site. By cleverly merging different words with “Ogilvy”—for instance, “hellogilvy” and “herogilvy”—to bring across her strong desire to work for the agency, she hopes to get an interview and ideally, a job offer.

If You Think We Are Alone In The Universe – You Might Want To See This One of the most popular questions today is “are we alone in the universe?” Believe it or not, you’re in the minority if you believe that absolutely no intelligent life exists in the universe. In the United States alone, at least half of all Americans say that we’re not alone in the universe. Fifty percent of Americans already believe that there is some form of life on other planets, while only seventeen percent think that there isn’t. Singapore government reveals latest measures to turn country into an innovator's haven 3D printers are available for use at IDA Labs, a government-led makerspace in the heart of Singapore. Criticize the Singapore government all you want for its tightened labor policies, which has made it harder for startups to hire good foreign talent. But it’s undeniable that they’re trying very hard to recreate Silicon Valley in Singapore — an earnest attempt to keep the small country prosperous. 2014 is shaping up to be a landmark year for the startup community in Singapore. Just three months in, a multi-agency effort is already underway to introduce a raft of programs to turn Singapore into a nation of innovators, makers, and tinkerers.