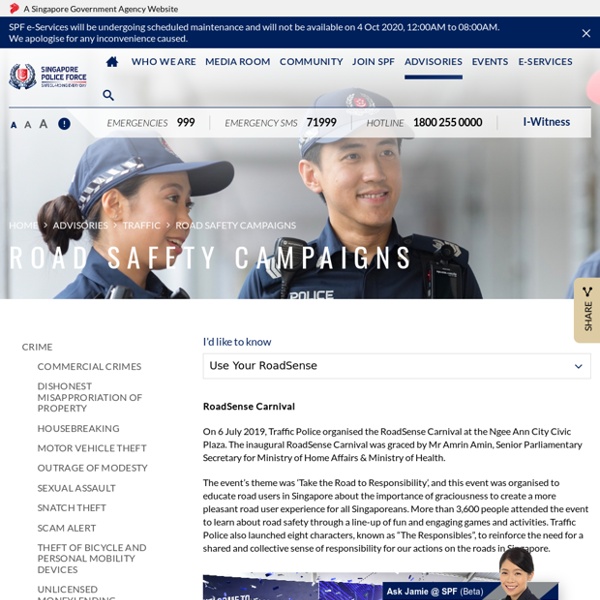 RoadSense Carnival On 6 July 2019, Traffic Police organised the RoadSense Carnival at the Ngee Ann City Civic Plaza. The inaugural RoadSense Carnival was graced by Mr Amrin Amin, Senior Parliamentary Secretary for Ministry of Home Affairs & Ministry of Health. The event’s theme was ‘Take the Road to Responsibility’, and this event was organised to educate road users in Singapore about the importance of graciousness to create a more pleasant road user experience for all Singaporeans. More than 3,600 people attended the event to learn about road safety through a line-up of fun and engaging games and activities. Traffic Police also launched eight characters, known as “The Responsibles”, to reinforce the need for a shared and collective sense of responsibility for our actions on the roads in Singapore. Singapore Ride Safe Campaign 2019 On 28 September 2019, Traffic Police and Singapore Road Safety Council held the Singapore Ride Safe at ComfortDelgro Driving Centre. 39th Shell Traffic Games

What Is Operant Conditioning and How Does It Work? Operant conditioning, sometimes referred to as instrumental conditioning, is a method of learning that employs rewards and punishments for behavior. Through operant conditioning, an association is made between a behavior and a consequence (whether negative or positive) for that behavior.1 For example, when lab rats press a lever when a green light is on, they receive a food pellet as a reward. When they press the lever when a red light is on, they receive a mild electric shock. (Negative Reinforcement) Keeping people safe on India’s killer roads In 2015, India adopted The Brasilia Declaration, committing to cut down deaths by road accidents by half by 2020. However, the number of deaths has actually increased, though marginally, from 1,48,707 in 2015 to 1,54,732 in 2020. Despite several measures being taken to realise the goal, why have Indian roads continued to be death traps? The causes of road accidents are several and often, it is the result of an interplay of various factors like human error, road environment and vehicular condition. From untrained drivers, poor road design to the lack of traffic signage and inadequate road literacy, a number of reasons are cited for the unending accidents.

Traffic police rewards motorists for acts of courtesy The Traffic Police is looking out for motorists who display courtesy on the road. But instead of handing out summons, motorists who have shown kind acts, such as giving way to other road users, are rewarded with $40 worth of petrol vouchers and a road safety mascot soft toy. That was what happened to Mr. (Punishment) Raise the cost of reckless behaviour on UAE roads A spate of road crashes involving fatalities and serious injuries has raised concerns on driver behaviour and speeding in the UAE. The most recent example of reckless behaviour is from Umm Al Quwain where a motorist, driving on the wrong side of Sheikh Mohammed Bin Zayed Road, rammed his vehicle into another car coming from the opposite direction. Three people, including two Emiratis and the motorists, died on the spot on Sunday.

2020 - Road Safety Month launched as Singapore reopens, Singapore News The eighth Singapore Road Safety Month was launched on Tuesday, with traffic expected to increase as Singapore entered the first phase of its post-circuit breaker reopening. Posters and banners will be put up in trains and at bus shelters and lamp posts during the month-long campaign to remind pedestrians to "ensure that all vehicles have come to a stop before crossing" and motorists to "slow down when approaching traffic lights". First-prize winners of a road safety art competition in March will have their works printed on ez-link cards for distribution. Traffic fines in Singapore (2020) - guide to LTA, URA, HDB, TP and ERP fines, Lifestyle News When you own a car, traffic wardens are your worst enemy and roadblocks send shivers down your spine - after all, there's nothing worse than getting traffic fines in Singapore. As if it's not enough that the cost of your car and COE would be enough for you to retire in a neighbouring country, there's also quite a number of traffic fines you could potentially be slapped with. LTA fines in Singapore HDB parking fines in Singapore URA fines in Singapore

Harsher penalties for driving offences including longer jail terms and heavier fines, Singapore News SINGAPORE - Irresponsible and reckless motorists may face longer jail terms and have their vehicles seized under proposed changes to the Road Traffic Act (RTA). Announcing this on Thursday (Feb 21), Ms Sun Xueling, Senior Parliamentary Secretary for Home Affairs (MHA) and National Development, said: “We want to increase the penalties for motorists who drive irresponsibly and cause serious accidents. “This will deter them and ensure that they receive sentences that are commensurate with the harm they caused.” With the changes, dangerous driving and careless driving under the RTA will correspond broadly to offences of rash act and negligent act under the Penal Code. The authorities will consider the manner in which the vehicle was operated, such as whether the motorist was driving at excessively high speeds or manoeuvring his vehicle in very close proximity to other vehicles. Offenders will also face a minimum sentence of at least a year, if death or grievous hurt is caused.

(Positive reinforcement) Driver gets award for helping elderly wheelchair user who was struggling to cross road in the rain, Singapore News SINGAPORE - A split-second decision on the road has seen Mr David Chin, 41, become the subject of a viral online video as well as the recipient of the Public Spiritedness Award on Friday (Sept 25). Recounting the incident, Mr Chin said that he was driving home in pouring rain after picking up his 11-year-old daughter from ballet class on Sept 5. At a traffic junction, he saw an old man on a wheelchair struggling to cross the road. The green light for pedestrians at the crossing were already flashing but the man, who looked about 70, had barely made it half way across. He had an umbrella over his shoulder, which impeded his manoeuvring of the wheelchair.