Thinker. TV. Writers. Leopold Lojka. Leopold Lojka (also spelt Leopold Loyka) (1885 – 18 July 1926) was the chauffeur of the car carrying Austro-Hungarian Archduke Franz Ferdinand at the point of Ferdinand's assassination in Sarajevo in 1914.[1] Lojka was born in 1885 in the town of Znojmo in southern Moravia in the Austro-Hungarian Empire (now part of the Czech Republic). 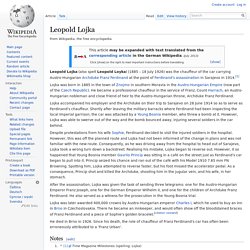 He became a professional chauffeur in the service of Franz, Count Harrach, an Austro-Hungarian nobleman and close friend of heir to the Austro-Hungarian throne, Archduke Franz Ferdinand. Lojka accompanied his employer and the Archduke on their trip to Sarajevo on 28 June 1914 so as to serve as Ferdinand's chauffeur. Shortly after leaving the military barracks where Ferdinand had been inspecting the local Imperial garrison, the car was attacked by a Young Bosnia member, who threw a bomb at it. William Adams (sailor) Adams was born in Gillingham, Kent, England. 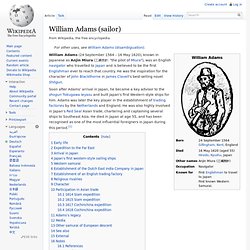 After losing his father at the age of twelve, he was apprenticed to shipyard owner Master Nicholas Diggins at Limehouse for the seafaring life.[2] He spent the next twelve years learning shipbuilding,[3] astronomy, and navigation before entering the Royal Navy.[3] Adams served in the Royal Navy under Sir Francis Drake and saw naval service against the Spanish Armada in 1588 as master of the Richarde Dyffylde, a resupply ship.[3] Adams then became a pilot for the Barbary Company.[3] During this service, according to Jesuit sources, he took part in an expedition to the Arctic that lasted about two years, in search of a Northeast Passage along the coast of Siberia to the Far East.

[citation needed] From left to right: "Blijde Bootschap", "Trouwe", "'t Gelooue", "Liefde" and "Hoope". 17th-century engraving. He set sail from Rotterdam in June 1598 on the Hoop and joined up with the rest of the fleet on 24 June. Poe Toaster. The Poe Toaster paid a stealthy visit to the cenotaph marking the site of Poe's original grave, in Baltimore, every January 19th for almost 80 years. 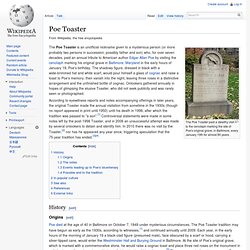 According to eyewitness reports and notes accompanying offerings in later years, the original Toaster made the annual visitation from sometime in the 1930s (though no report appeared in print until 1950) until his death in 1998, after which the tradition was passed to "a son".[1] Controversial statements were made in some notes left by the post-1998 Toaster, and in 2006 an unsuccessful attempt was made by several onlookers to detain and identify him. In 2010 there was no visit by the Toaster,[2] nor has he appeared any year since, triggering speculation that the 75-year tradition has ended.[3][4] History[edit] Origins[edit] A group of varying size composed of reporters and Poe enthusiasts observed the event each year. Quentin English, Quentin's Friends. Kaspar Hauser. Kaspar Hauser (30 April 1812 (?) 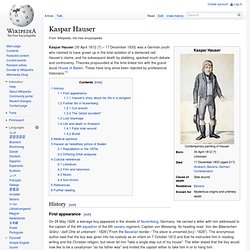 – 17 December 1833) was a German youth who claimed to have grown up in the total isolation of a darkened cell. Hauser's claims, and his subsequent death by stabbing, sparked much debate and controversy. Theories propounded at the time linked him with the grand ducal House of Baden. These have long since been rejected by professional historians.[1] History[edit] First appearance[edit] There was another short letter enclosed purporting to be from his mother to his prior caretaker. A shoemaker named Weickmann took the boy to the house of Captain von Wessenig, where he would repeat only the words "I want to be a cavalryman, as my father was" and "Horse!

He spent the following two months in Vestner Gate Tower (de) in the care of a jailer named Andreas Hiltel. Guy Stewart Callendar: Global warming discovery marked. Seventy-five years ago an amateur scientist made a breakthrough discovery in the field of climate change. 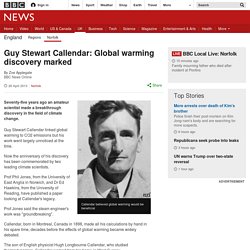 Guy Stewart Callendar linked global warming to CO2 emissions but his work went largely unnoticed at the time. Now the anniversary of his discovery has been commemorated by two leading climate scientists. Prof Phil Jones, from the University of East Anglia in Norwich, and Dr Ed Hawkins, from the University of Reading, have published a paper looking at Callendar's legacy. Prof Jones said the steam engineer's work was "groundbreaking". Lynne Stewart. Lynne Irene Stewart (born October 8, 1939) is a former attorney who was known for representing controversial, poor, and often unpopular defendants. 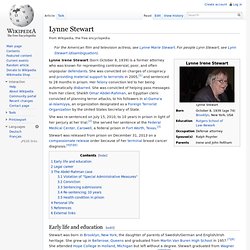 She was convicted on charges of conspiracy and providing material support to terrorists in 2005,[1] and sentenced to 28 months in prison. Her felony conviction led to her being automatically disbarred. Gertrude Bell. Gertrude Margaret Lowthian Bell, CBE (14 July 1868 – 12 July 1926) was an English writer, traveller, political officer, administrator, archaeologist and spy who explored, mapped, and became highly influential to British imperial policy-making due to her skill and contacts, built up through extensive travels in Greater Syria, Mesopotamia, Asia Minor, and Arabia. 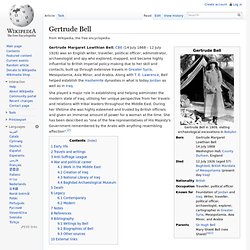 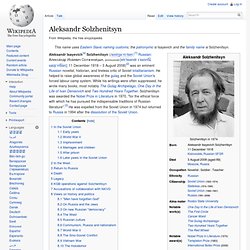 He helped to raise global awareness of the gulag and the Soviet Union's forced labour camp system. Boudica. Queen of the British Iceni tribe Boudica or Boudicca (, ), also known as Boadicea (, also ) or Boudicea, and in Welsh as Buddug (IPA: [ˈbɨðɨɡ]),[1][2] was a queen of the British Celtic Iceni tribe who led an uprising against the occupying forces of the Roman Empire in AD 60 or 61. 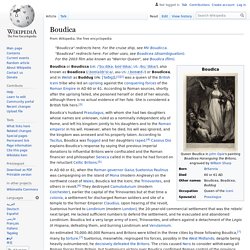 She died shortly after its failure and was said to have poisoned herself. She is considered a British folk hero.[3] Boudica's husband Prasutagus, with whom she had two children whose names are unknown, ruled as a nominally independent ally of Rome, and left his kingdom jointly to his daughters and to the Roman emperor in his will. James Randi, Magician Who Debunked Paranormal Claims, Dies at 92. James Randi, a MacArthur award-winning magician who turned his formidable savvy to investigating claims of spoon bending, mind reading, fortunetelling, ghost whispering, water dowsing, faith healing, U.F.O. spotting and sundry varieties of bamboozlement, bunco, chicanery, flimflam, flummery, humbuggery, mountebankery, pettifoggery and out-and-out quacksalvery, as he quite often saw fit to call them, died on Tuesday at his home in Plantation, Fla. 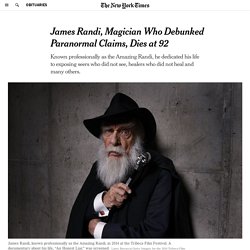 He was 92. His death was announced by the James Randi Educational Foundation.