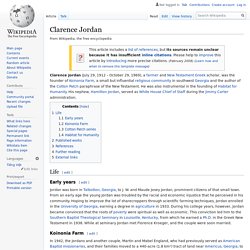 W. and Maude Josey Jordan, prominent citizens of that small town. From an early age the young Jordan was troubled by the racial and economic injustice that he perceived in his community. Hoping to improve the lot of sharecroppers through scientific farming techniques, Jordan enrolled in the University of Georgia, earning a degree in agriculture in 1933. Koinonia Farm[edit] In 1942, the Jordans and another couple, Martin and Mabel England, who had previously served as American Baptist missionaries, and their families moved to a 440-acre (1.8 km²) tract of land near Americus, Georgia, to create an interracial, Christian farming community.

Hong Xiuquan - Wikipedia. Hong Xiuquan(1 January 1814 – 1 June 1864), born Hong Renkun and with the courtesy name Huoxiu, was a Hakka Chinese leader of the Taiping Rebellion against the Qing Dynasty, establishing the Taiping Heavenly Kingdom over varying portions of southern China, with himself as the "Heavenly King" and self-proclaimed brother of Jesus Christ. 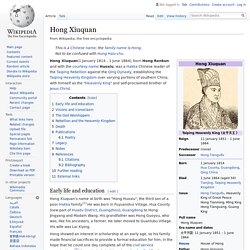 Early life and education[edit] Hong Xiuquan's name at birth was "Hong Huoxiu", the third son of a poor Hakka family.[1] He was born in Fuyuanshui Village, Hua County (now part of Huadu District, Guangzhou), Guangdong to Hong Jingyang and Madam Wang. His grandfather was Hong Guoyou, who was, like his ancestors, a farmer. He later moved to Guanlubu Village. His wife was Lai Xiying. Visions and iconoclasm[edit] In 1837 Hong again attempted to take the imperial examinations, but apparently suffered a nervous collapse when he failed them again. It was not until six years later that Hong took time to carefully examine the Christian tracts he had received. Carrie Nation. Carrie Amelia Moore Nation (first name also spelled Carry; November 25, 1846 – June 9, 1911) was an American woman who was a radical member of the temperance movement, which opposed alcohol before the advent of Prohibition. 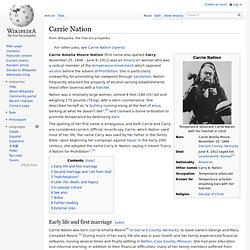 She is particularly noteworthy for promoting her viewpoint through vandalism. Nation frequently attacked the property of alcohol-serving establishments (most often taverns) with a hatchet. The spelling of her first name is ambiguous, and both Carrie and Carry are considered correct. Official records say Carrie, which Nation used most of her life; the name Carry was used by her father in the family Bible. Upon beginning her campaign against liquor in the early 20th century, she adopted the name Carry A. Early life and first marriage[edit] During the Civil War, the family moved several times, returning to High Grove Farm in Cass County. In 1865 she met a young physician who had fought for the Union: Dr. Second marriage and 'call from God'[edit] "Hatchetations"[edit] Antônio Conselheiro. Johann Tetzel. Johann Tetzel (1465 – 11 August 1519) was a Roman Catholic German Dominican friar and preacher. 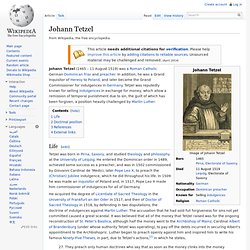 In addition, he was a Grand Inquisitor of Heresy to Poland, and later became the Grand Commissioner for indulgences in Germany. Tetzel was reputedly known for selling indulgences in exchange for money, which allow a remission of temporal punishment due to sin, the guilt of which has been forgiven, a position heavily challenged by Martin Luther. Life[edit] He acquired the degree of Licentiate of Sacred Theology in the University of Frankfurt an der Oder in 1517, and then of Doctor of Sacred Theology in 1518, by defending in two disputations, the doctrine of indulgences against Martin Luther.

The accusation that he had sold full forgiveness for sins not yet committed caused a great scandal. 27. Tetzel was also condemned (though later pardoned) for immorality. Tetzel died in Leipzig in 1519. Doctrinal position[edit] Tetzel overstated Catholic doctrine in regard to indulgences for the dead. Francis of Assisi. Saint Francis of Assisi (Italian: San Francesco d'Assisi, born Giovanni di Pietro di Bernardone, but nicknamed Francesco ("the Frenchman") by his father, 1181/1182 – October 3, 1226)[1][3] was an Italian Catholic friar and preacher. 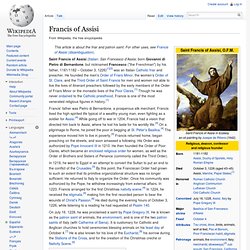 He founded the men's Order of Friars Minor, the women’s Order of St. Clare, and the Third Order of Saint Francis for men and women not able to live the lives of itinerant preachers followed by the early members of the Order of Friars Minor or the monastic lives of the Poor Clares.[1] Though he was never ordained to the Catholic priesthood, Francis is one of the most venerated religious figures in history.[1] Francis' father was Pietro di Bernardone, a prosperous silk merchant. On July 16, 1228, he was proclaimed a saint by Pope Gregory IX.