Rubik’s Cube Inventor Opens Up About His Creation in New Book 'Cubed' “On the way to trying to understand the nature of the cube, I changed my mind,” Rubik said. 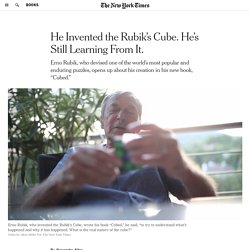 “What really interested me was not the nature of the cube, but the nature of people, the relationship between people and the cube.” Reading “Cubed” can be a strange, disorienting experience, one that’s analogous to picking up and twisting one of his cubes. It lacks a clear narrative structure or arc — an effect that’s deliberate, Rubik said. Initially, he didn’t even want the book to have chapters or even a title. “I had several ideas, and I thought to share this mixture of ideas that I have in my mind and leave it to the reader to find out which ones are valuable,” he said. Or you can start at the beginning. 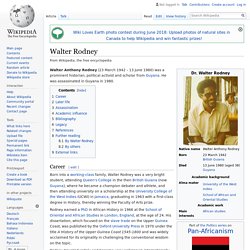 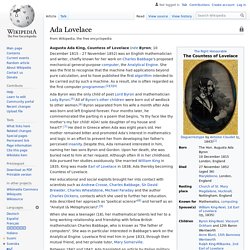 She was the first to recognise that the machine had applications beyond pure calculation, and to have published the first algorithm intended to be carried out by such a machine. As a result, she is often regarded as one of the first computer programmers.[3][4] Augusta Byron was the only child of poet Lord Byron and Lady Byron.[5] All of Byron's other children were born out of wedlock to other women.[6] Byron separated from his wife a month after Ada was born and left England forever four months later. He commemorated the parting in a poem that begins, "Is thy face like thy mother's my fair child! Marcelino Sanz de Sautuola - Wikipedia. Altamira cave[edit] The Altamira cave, now famous for its unique collection of prehistoric art, was well known to local people, but had not been given much attention until in 1868, when it was "discovered" by the hunter Modesto Peres. 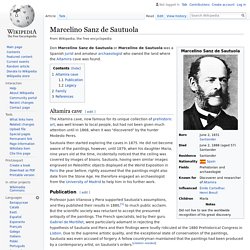 Sautuola then started exploring the caves in 1875. He did not become aware of the paintings, however, until 1879, when his daughter Maria, nine years old at the time, incidentally noticed that the ceiling was covered by images of bisons. Sautuola, having seen similar images engraved on Paleolithic objects displayed at the World Exposition in Paris the year before, rightly assumed that the paintings might also date from the Stone Age. He therefore engaged an archaeologist from the University of Madrid to help him in his further work.

Publication[edit] Professor Juan Vilanova y Piera supported Sautuola's assumptions, and they published their results in 1880,[1] to much public acclaim.

Juana Inés de la Cruz. Sister (Spanish: Sor) Juana Inés de la Cruz, O.S.H. (English: Joan Agnes of the Cross) (12 November 1651 – 17 April 1695), was a self-taught scholar and poet of the Baroque school, and Hieronymite nun of New Spain. Although she lived in a colonial era when Mexico was part of the Spanish Empire, she is considered today both a Mexican writer and a contributor to the Spanish Golden Age, and she stands at the beginning of the history of Mexican literature in the Spanish language. Early life[edit] A portrait of Juana during her youth in 1666, which states she was 15 at the time, when she first entered the viceregal court She was born Juana Inés de Asbaje y Ramírez de Santillana in San Miguel Nepantla (now called Nepantla de Sor Juana Inés de la Cruz in her honor) near Mexico City. 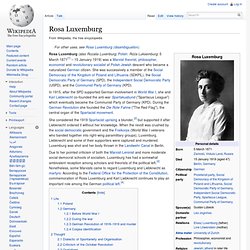 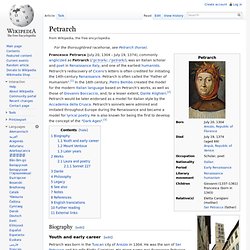 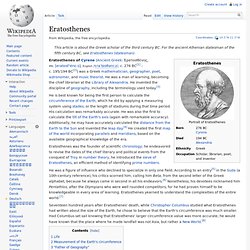 He was a man of learning, becoming the chief librarian at the Library of Alexandria. He invented the discipline of geography, including the terminology used today.[3] Eratosthenes was the founder of scientific chronology; he endeavored to revise the dates of the chief literary and political events from the conquest of Troy.

Enheduanna. Regarded by literary and historical scholars as possibly the earliest known author and poet, Enheduanna served as the High Priestess during the third millennium BCE.[1] She was appointed to the role by her father, King Sargon of Akkad. 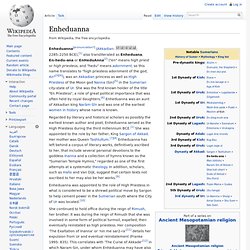 Her mother was Queen Tashlultum.[7][8] Enheduanna has left behind a corpus of literary works, definitively ascribed to her, that include several personal devotions to the goddess Inanna and a collection of hymns known as the "Sumerian Temple Hymns," regarded as one of the first attempts at a systematic theology. In addition, scholars, such as Hallo and Van Dijk, suggest that certain texts not ascribed to her may also be her works.[9] Alan Watts. Anthony B. Pinn.