Religion, Worship and the Arts

THE QUEEN OF SHEBA. The Queen of Sheba is not named, but her title has become famous in history and literature.Solomon Hebrew ‘shelomoh‘, means ‘his replacement’, perhaps referring to his mother Bathsheba’s first son, who died soon after birth. 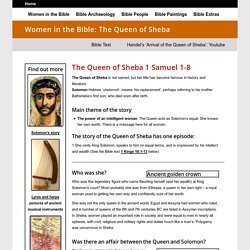 Main theme of the story The power of an intelligent woman. The Queen acts as Solomon’s equal. Top 10 mothers from the Bible - Marriage & Family - Home & Family. What do these mothers have in common with yours? 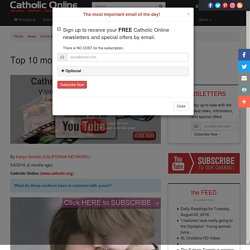 Mothers are God's gift to us all. It is mothers who tend to love us with an unbridled passion and who can kiss all our boo-boos away - but what about the mothers of the Bible? Mary Magdelene. This article is about the biblical figure. 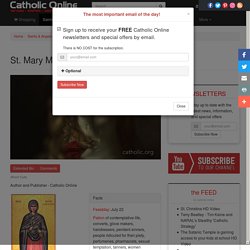 For other uses, see Mary Magdalene (disambiguation). Mary Magdalene (Hebrew: מרים המגדלית‎‎, original Greek: Μαρία ἡ Μαγδαληνή),[2] or Mary of Magdala and sometimes the Magdalene, is a figure in Christianity who, according to the Bible, traveled with Jesus as one of his followers. She is said to have witnessed Jesus' crucifixion and resurrection.[3] Within the four Gospels she is named at least 12 times,[4] more than most of the apostles. The Gospel of Luke says seven demons had gone out of her,[Lk. 8:2] and the longer ending of Mark says Jesus had cast seven demons out of her. Religions - Christianity: Mary Magdalene. Women of the Bible - 10 Examples of Feminine Courage.

Women of the Bible Images 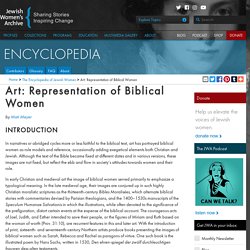 Although the text of the Bible became fixed at different dates and in various versions, these images are not fixed, but reflect the ebb and flow in society’s attitudes towards women and their role. In early Christian and medieval art the image of biblical women served primarily to emphasize a typological meaning. In the late medieval age, their images are conjured up in such highly Christian moralistic scriptures as the thirteenth-century Bibles Moralisées, which alternate biblical stories with commentaries devised by Parisian theologians, and the 1400–1530s manuscripts of the Speculum Humanae Salvationis in which the illustrations, while often devoted to the significance of the prefiguration, distort certain events at the expense of the biblical account. Eve. The Protector by Elspeth Young - Art. Wednesday - October 25th, 2017 11:23pm2 years ago Holiday shipping schedule By Al R. 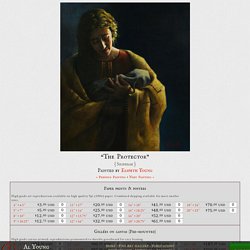 Young Listed below are the last days, for each type of product from the Studios and each shipping speed, to order a product and be confident of its delivery by Christmas Eve.Domestic ShippingPlease be aware of the following policies and recommendations:Rush-order requestsReceiving a shipment from Al Young StudiosFramingInternational Shipping DelaysWhen ordering internationally, please add the following number of days to the above table to ensure on-time delivery. Unfortunately, it is impossible to guarentee that any international orders will not encounter extra delays in International Customs...

Read more » The Bible Stories Essential to Art History. To a contemporary audience, the biblical narratives that appear in Western art from the Middle Ages through the modern era can appear impenetrably obscure. 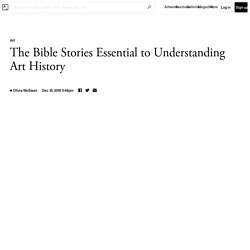 The ubiquity of New and Old Testament images in art originates from the need to visually illustrate and spiritually inspire largely illiterate audiences in an emotional—rather than intellectual—manner. There is a hierarchy to these narratives that was primarily dictated by the physical spaces in which they were to appear. Scenes considered most important occupied prominent focal points of a church or altarpiece, with those of lesser significance radiating outward. Women in Religious Art - Oxford Research Encyclopedia of Religion. Judith in Art. Infamous seductress or paragon of virtue—which label describes Judith, the Jewish heroine who destroyed the Assyrian general Holofernes? 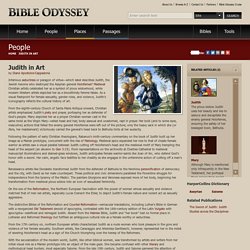 Medieval Christian artists celebrated her as a symbol of pious widowhood, while modern Western artists depicted her as a bloodthirsty femme fatale. Artemisia Gentileschi. Italian Baroque painter Artemisia Lomi or Artemisia Gentileschi (US: /ˌdʒɛntɪˈlɛski, -tiːˈ-/,[1][2] Italian: [arteˈmiːzja dʒentiˈleski]; July 8, 1593 – c. 1656) was an Italian Baroque painter, today considered one of the most accomplished painters in the generation following that of Caravaggio. 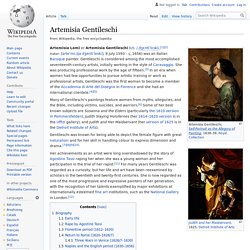 In an era when female painters were not easily accepted by the artistic community or patrons, she was the first woman to become a member of the Accademia di Arte del Disegno in Florence and had international clientele.[3][4] BIBLE PAINTINGS: RUTH, NAOMI & BOAZ - A LOVE STORY. Questions for Bible study groups Who were Ruth and Naomi in the Bible? 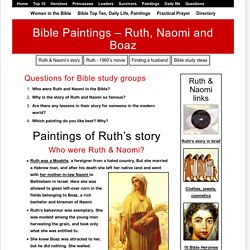 Why is the story of Ruth and Naomi so famous? Are there any lessons in their story for someone in the modern world? Which painting do you like best? Why? Who were Ruth & Naomi? Ruth was a Moabite, a foreigner from a hated country. Bethlehem in Israel. ‘Whither thou goest’, Sandy Freckleton Gagan. Conference Art Exhibit Celebrates Women of the Bible - Church News and Events. Contributed By Jason Swenson, Church News staff writer Article Highlights Eleven paintings highlighting faithful women from the Bible will be on display during general conference in the Conference Center. 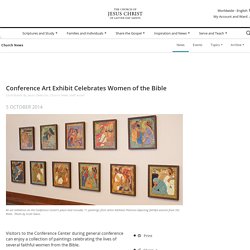 “I paint about integrity of life. It all has meaning to me, so hopefully it has meaning to those who see it too.” —Kathleen Peterson, Latter-day Saint artist. Women of the Bible – Art & Theology. The Breath and the Clay Artists (speakers/workshop leaders/Q&A panel members): John Mark McMillan, Stephen Roach, Jason Upton, Cageless Birds, Joel McKerrow, Josh Riebock, Stephen Roach, Mykell Wilson, Ray Hughes, Gemma Bender, Taylor Johnson, Eastlyn and Joshua, Vesper Stamper, Turtledoves, Avril WardDate: March 22–25, 2018Location: Awake Church, Winston-Salem, North CarolinaCost: $100 (but see pricing details for other options; some events free to public)Description: “The Breath & the Clay is a creative arts gathering exploring the intersections of faith, art & culture.

The weekend event includes times of worship, keynote speakers, performances, and a curated art gallery hosted by CIVA. Hands-on workshops [poetry, choreography, songwriting, painting, photography], a private luncheon and an after-party are available for additional purchase.” If you’re not able to attend, you should at least check out their Makers & Mystics podcast, which is in its third season. Ancient Christian Art Change Views of Women. The following is a transcript of the video interview. You’ll need to play the video to see the images being discussed.SP indicates Shirley Paulson is the speaker, AK indicates Ally Kateusz.

Announcer: Hello and welcome to this video from The Bible and Beyond. We explore historical and spiritual questions about Jesus, gender, women, salvation, healing, and the meaning of life. Main.