The first people to do stuff 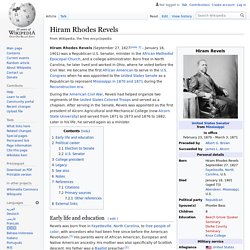 Senator, minister in the African Methodist Episcopal Church, and a college administrator. Born free in North Carolina, he later lived and worked in Ohio, where he voted before the Civil War. He became the first African American to serve in the U.S. Congress when he was appointed to the United States Senate as a Republican to represent Mississippi in 1870 and 1871 during the Reconstruction era.

During the American Civil War, Revels had helped organize two regiments of the United States Colored Troops and served as a chaplain. Lloyd Austin. 28th United States Secretary of Defense Early life and education[edit] Austin was born on August 8, 1953, in Mobile, Alabama[3] and raised in Thomasville, Georgia.[4] He graduated from the United States Military Academy at West Point with a Bachelor of Science degree in 1975, where he was commander of G-1 (G Company, 1st Regiment).[5][6] He later earned a Master of Arts degree in counselor education from Auburn University's College of Education in 1986, and a Master of Business Administration in business management from Webster University in 1989. 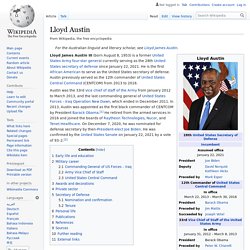 He is a graduate of the Infantry Officer Basic and Advanced courses, the Army Command and General Staff College, and the Army War College.[6] Military career[edit] Colonel Lloyd Austin in 1998. Official portrait of General Lloyd Austin while serving as the commander of U.S. Commanding General of US Forces – Iraq[edit] Army Vice Chief of Staff[edit] Raphael Warnock - 1st Black Senator Elected from Georgia. American pastor, United States Senator-elect from Georgia Warnock and Ossoff are the first Democrats elected to the U.S. 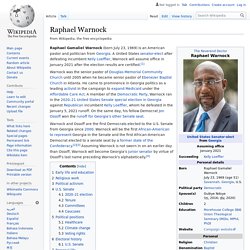 Senate from Georgia since 2000. Warnock will be the first African-American to represent Georgia in the Senate and the first African-American Democrat elected to a senate seat by a former state of the Confederacy.[2][3] Assuming Warnock is not sworn in on an earlier day than Ossoff, Warnock will become Georgia's junior senator by virtue of Ossoff's last name preceding Warnock's alphabetically.[4] Early life and education[edit] Warnock is from Savannah, Georgia. Religious work[edit] In the 1990s, Warnock served as the youth pastor and then assistant pastor at Abyssinian Baptist Church in New York.[12][13] While Warnock was pastor at Abyssinian, the church declined to hire workfare recipients as part of organized opposition to then-mayor Rudy Giuliani's workfare program.[14] Bianca Smith joins Red Sox, becoming the first Black female coach in pro baseball history. The Red Sox announced they've hired Bianca Smith as a minor league coach on Monday, making her the first Black woman coach in professional baseball history. 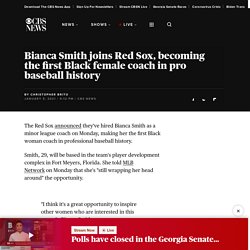 "This is not something I thought about when I was younger and I kind of fell into it being an athlete, so I'm excited to get that chance to show what I can do. " She also studied biomechanics to gain an edge in coaching her players. Victor Glover to Be First Black Astronaut on I.S.S. for Extended Stay. In the 20-some years that people have been living aboard the International Space Station, its extended crew has never included a Black astronaut. 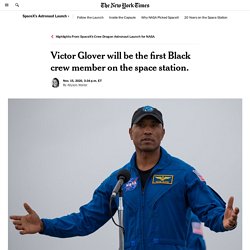 Victor J. Glover, a Navy commander and test pilot who joined the astronaut corps in 2013, will be the first. Since the International Space Station’s inception it has seen numerous other milestones: hosting the world’s first space tourist, having its first female commander and enduring the transition from U.S. astronauts being transported through NASA’s space shuttle program to using SpaceX’s spacecraft.

But Mr. Glover’s achievement is notable for NASA, which has worked to spotlight the “hidden figures” in its history, but has so far sent only 14 Black Americans to space out of a total of more than 300 NASA astronauts. He will not be the first Black astronaut aboard the station. Mr. Next year, he could be followed by Jeanette Epps, who would be the first Black woman to to be part of an I.S.S. crew. During the summer, Mr. Charles F. Sydney Barber Will Be First Black Woman to Lead Midshipman at U.S. Naval Academy.

First to use his style of guitar playing in jazz: plucking with the side of his thumb. – haxwell 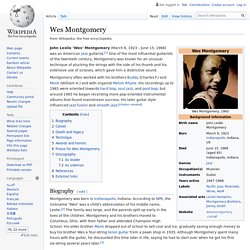 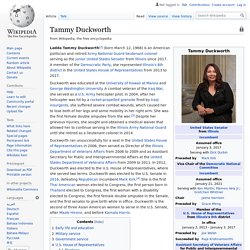 Duckworth is the second Asian American woman serving in the U.S. Senate, after Mazie Hirono, and before Kamala Harris. Lena horne 1944 motion picture magazine - Recherche Google. Azellia White. First African-American woman aviator in Texas Azellia White (June 3, 1913 – September 15, 2019) was an American aviator who was one of the first African-American women to earn a pilot's license in the United States.[1] She is recognized as a trailblazer, overcoming widespread perceptions at the time, "that neither women nor African Americans were qualified to fly airplanes. 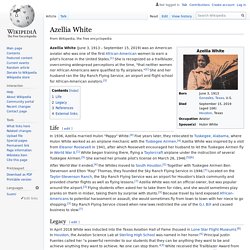