The Innocence Project. Harward, who narrowly escaped the death penalty, was convicted primarily on the testimony of two forensic dentists who said that Harward’s teeth matched marks left on the rape victim. 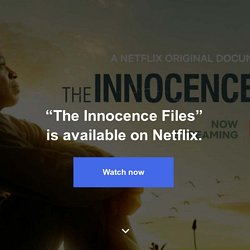 During the course of his prosecution 6 forensic dentists falsely claimed that Harward’s teeth matched a bite mark on one of the victims. New DNA evidence definitively proved Harward’s innocence and pointed to Jerry Crotty as the real assailant. Harward was convicted of a 1982 rape and murder in Newport News, Virginia. The assailant broke into a home of a couple, killing a man and raping his wife. Kidnapped, Then Forced Into The Sideshow: The True Story Of The Muse Brothers. This is FRESH AIR. 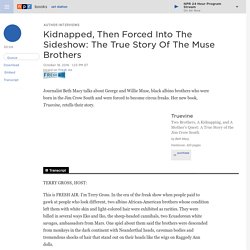 I'm Terry Gross. In the era of the freak show when people paid to gawk at people who look different, two albino African-American brothers whose condition left them with white skin and light-colored hair were exhibited as rarities. They were billed in several ways Eko and Iko, the sheep-headed cannibals, two Ecuadorean white savages, ambassadors from Mars. One spiel about them said the brothers were descended from monkeys in the dark continent with Neanderthal heads, caveman bodies and tremendous shocks of hair that stand out on their heads like the wigs on Raggedy Ann dolls.

But these brothers weren't from Africa, Ecuador or Mars. Beth Macy, welcome back to FRESH AIR. BETH MACY: Sure. GROSS: Then there was Ota Benga who is billed as the missing link between human and ape. MACY: Right. GROSS: I mean, who was Ota Benga He was not really a pygmy liberated from the Congo. MACY: (Laughter) Right. Harriet Muse was wondering what had happened to her sons. MACY: Yeah, yeah. Jean Seberg - Wikipedia. American actress She was also one of the best-known targets of the FBI COINTELPRO project.[6][7] Her targeting was a well-documented retaliation for her support of the Black Panther Party in the 1960s. 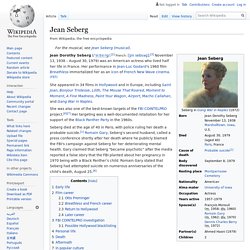 Seberg died at the age of 40 in Paris, with police ruling her death a probable suicide.[1] Romain Gary, Seberg's second husband, called a press conference shortly after her death where he publicly blamed the FBI's campaign against Seberg for her deteriorating mental health. Gary claimed that Seberg "became psychotic" after the media reported a false story that the FBI planted about her pregnancy in 1970 being with a Black Panther's child. Romain Gary stated that Seberg had attempted suicide on numerous anniversaries of the child's death, August 25.[8] Early life[edit] Marie-Joseph Angélique - Wikipedia. Marie-Josèphe dite Angélique (died June 21, 1734) was the name given by her last owners[1] to a Portuguese-born black slave in New France (later the province of Quebec in Canada). 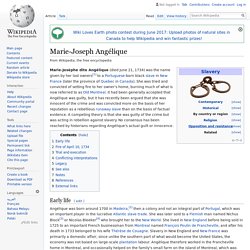 She was tried and convicted of setting fire to her owner's home, burning much of what is now referred to as Old Montreal. It had been generally accepted that Angélique was guilty, but it has recently been argued that she was innocent of the crime and was convicted more on the basis of her reputation as a rebellious runaway slave than on the basis of factual evidence. A competing theory is that she was guilty of the crime but was acting in rebellion against slavery.

No consensus has been reached by historians regarding Angélique's actual guilt or innocence. Early life[edit] Angélique was born around 1700 in Madeira,[2] then a colony and not an integral part of Portugal, which was an important player in the lucrative Atlantic slave trade. Tensions were high between the slave and her mistress.

George Stinney. (October 21, 1929 – June 16, 1944) was, at age 14, the youngest person executed in the United States in the 20th century. [ 1 ] Stinney, of Alcolu, South Carolina, was convicted of murdering two young girls after police said he confessed to the murders. 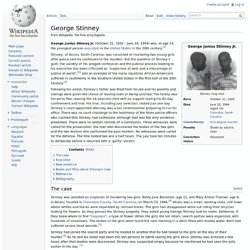 But the question of Stinney's guilt, the validity of his alleged confession and the judicial process leading to his execution has been criticized as "suspicious at best and a miscarriage of justice at worst", [ 2 ] and an example of the many injustices African-Americans suffered in courtrooms in the Southern United States in the first half of the 20th Century. [ 3 ] Following his arrest, Stinney's father was fired from his job and his parents and siblings were given the choice of leaving town or being lynched.

The family was forced to flee, leaving the 14-year-old child helpless with no support during his 81-day confinement and trial. His trial, including jury selection, lasted just one day. Iwao Hakamada. Iwao Hakamada (袴田 巖, Hakamada Iwao? 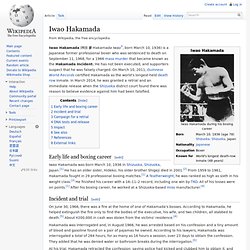 , born March 10, 1936) is a Japanese former professional boxer who was sentenced to death on September 11, 1968, for a 1966 mass murder that became known as the Hakamada Incident. He has not been executed, and supporters suspect that he was falsely charged. On March 10, 2011, Guinness World Records certified Hakamada as the world’s longest-held death row inmate. In March 2014, he was granted a retrial and an immediate release when the Shizuoka district court found there was reason to believe evidence against him had been falsified.

Early life and boxing career[edit] Iwao Hakamada was born March 10, 1936 in Shizuoka, Shizuoka, Japan.[1] He has an older sister, Hideko; his older brother Shigeji died in 2001.[2] From 1959 to 1961, Hakamada fought in 29 professional boxing matches.[1] A featherweight, he was ranked as high as sixth in his weight class.[3] He finished his career with a 16–11–2 record, including one win by TKO. Incident and trial[edit]