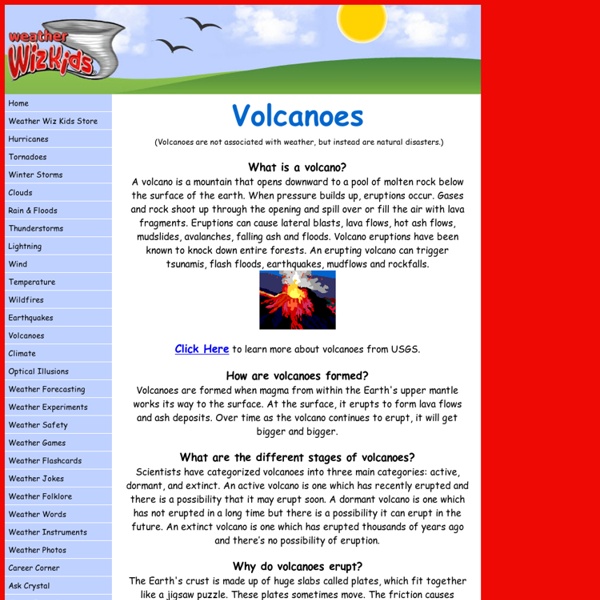 Volcanoes (Volcanoes are not associated with weather, but instead are natural disasters.) What is a volcano?A volcano is a mountain that opens downward to a pool of molten rock below the surface of the earth. Click Here to learn more about volcanoes from USGS. How are volcanoes formed? What are plate tectonics? Click Here to learn more about plate tectonics and the drifting of our continents. How many volcanoes are there? What are the different types of volcanoes? What is the difference between lava and magma? Why does lava take a long time to cool down? What is a pyroclastic flow? What is lahar? What is pumice? What is the largest active volcano? What is the Ring of Fire? When did Mount St. Click Here for more info on Mount St. Click Here to see an animation of an earthquake and the resulting tsunami. Know the Lingo MAGMA - Magma is the liquid rock inside a volcano.LAVA - Lava is the liquid rock (magma) that flows out of a volcano. Volcano Safety Tips Volcano Activities

Interesting Facts about Volcanoes Volcanoes are openings in the Earth’s surface. When they are active they can let ash, gas and hot magma escape in sometimes violent and spectacular eruptions. The word volcano originally comes from the name of the Roman god of fire, Vulcan. Volcanoes are usually located where tectonic plates meet. What is a volcano? Introduction to volcanoes The earth's mountains, plains, plateaus, soils, rocks, etc. as we see it today is believed to have gone through many phases, with about 80% of it being carved out by the action of volcanoes. A volcano is simply a rapture (opening or vent) on the earth's surface (crust) through which molten magma (extremely hot mixture of gases, lava, ash and other burning substances) escape on to the earth's surface. How do Volcanoes look like? A volcano looks like a mountain, although they are two different things.A mountain is a large natural rise of the earth's surface, more like a giant heap of sand. A volcano is also like a big heap of earth just that this heap is a mixture of lava, ash, dust, and other substances that have piled up over many years. In May 1980, the Mountain St. Volcanoes occur at weak zones or points in the earth’s crust (including constructive and destructive boundaries). Now we shall see in a bit more detail how volcanoes come about.

Volcano Facts 6. Volcanoes are classified as active, dormant or extinct depending on the amount of volcanic activity happening. 'Active' means there's regular activity, 'dormant' means there's been recent activity but that it's currently quiet and 'extinct', meaning it's been so long since the last eruption that it's unlikely to ever erupt again. 7. 8. 9. 10. 11.

Volcanoes Volcanoes Image source: iStockphoto Earthquakes You might not realise but the ground beneath us never stops moving. science Years: 6,7 8 Some mountains are still growing! Did you know that the mountains of New Zealand are still slowly growing higher and that Australia is gradually moving towards the... Science Year: 9 Earthquakes science Years: 6,7 8 Some mountains are still growing! Science Year: 9 Tectonic boundaries: convergent How does the movement of tectonic plates affect the Earth's surface? Sleeping giant awakens on Montserrat The small Caribbean island of Montserrat is home to a volcano that lay dormant for over 300 years until it erupted in 1995. Geography Year: 8 Predicting volcanic eruptions Imagine a volcano erupting kilometres away. Science Years: 6,9 Living next door to a deadly volcano Imagine living in the shadow of a volcano? Wildlife sanctuary in Ngorongoro Crater Deep in Africa's Great Rift Valley is one of the continent's most important wildlife sanctuaries. Geography Years: 4,8 9