How a Volcanic Eruption Gave Birth to Frankenstein and Dracula. Two hundred years ago, the greatest eruption in Earth’s recorded history took place. 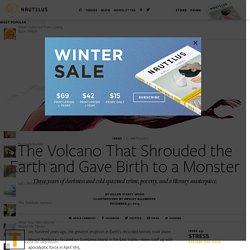 Mount Tambora—located on Sumbawa Island in the East Indies—blew itself up with apocalyptic force in April 1815. After perhaps 1,000 years’ dormancy, the devastating evacuation and collapse required only a few days. It was the concentrated energy of this event that was to have the greatest human impact. By shooting its contents into the stratosphere with biblical force, Tambora ensured its volcanic gases reached sufficient height to disable the seasonal rhythms of the global climate system, throwing human communities worldwide into chaos. Huaynaputina: Peru 1600. Ash falling on the city of Arequipa in 1600 Huaynaputina (Spanish pronunciation: [wainapuˈtina], Pronounced: /waɪnəpʊˈtiːnə/ W'EYE-nuh-PUU-tee-NUH; from Quechua: Waynaputina, meaning "Young Volcano") is a stratovolcano in a volcanic upland in southern Peru. 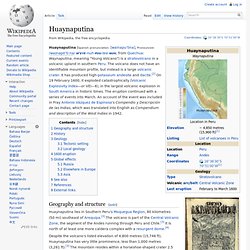 The volcano does not have an identifiable mountain profile, but instead is a large volcanic crater. It has produced high-potassium andesite and dacite.[2] On 19 February 1600, it exploded catastrophically (Volcanic Explosivity Index—or VEI—6), in the largest volcanic explosion in South America in historic times. Siberian Traps. The extent of the Siberian Traps. 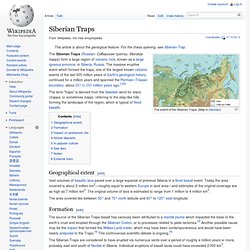 (Map in German) The Siberian Traps (Russian: Сибирские траппы, Sibirskije trappy) form a large region of volcanic rock, known as a large igneous province, in Siberia, Russia. Russian famine of 1601–03. The Russian famine of 1601–1603 was Russia's worst famine in terms of proportional effect on the population, killing perhaps two million people, a third of Russian people, during the Time of Troubles, when the country was unsettled politically and later invaded by the Polish-Lithuanian Commonwealth. 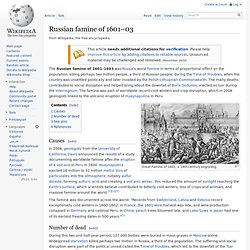 The many deaths contributed to social disruption and helped bring about the downfall of Boris Godunov, elected as tsar during the interregnum. Mount Samalas: Indonesia 1257. Phlegraean Fields. Sulfur at the Solfatara crater Geological phases[edit] Three geological phases or periods are recognised and distinguished.[3] The First Phlegraean Period. 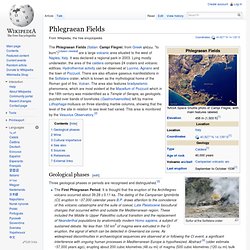 It is thought that the eruption of the Archiflegreo volcano occurred about 39.28 ± 0.11 ka. The dating of the Campanian Ignimbrite (CI) eruption to ~37,000 calendar years B.P. draws attention to the coincidence of this volcanic catastrophe and the suite of coeval, Late Pleistocene biocultural changes that occurred within and outside the Mediterranean region. Volcanic deposit indicating possible eruption dated Ar at 315, 205, 157 and 18.0 kya[citation needed] The caldera, which now is essentially at ground level, is accessible on foot. Wine[edit] Red Campi Flegrei is a blend of 50-70% Piedirosso, 10-30% Aglianico and/or Sciascinoso and up to 10% of other local (both red and white) grape varieties. Cultural importance[edit] Campi Flegrei has had strategical and cultural importance. See also[edit] Sources[edit] Mist Hardships Disaster. Móðuharðindin (Icelandic pronunciation: [ˈmoːuðʏˌharðɪntɪn], Mist Hardships) was a natural disaster which took place in Iceland in the years 1783–1785, following the volcanic eruption of Mount Laki. 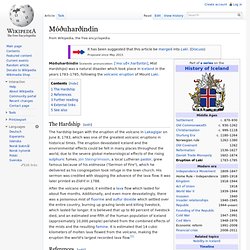 Laki: Iceland 1783. Laki or Lakagígar (Craters of Laki) is a volcanic fissure in the south of Iceland, not far from the canyon of Eldgjá and the small village Kirkjubæjarklaustur. 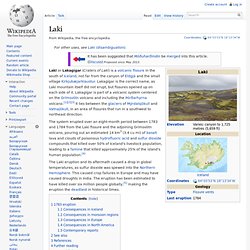 Lakagígar is the correct name, as Laki mountain itself did not erupt, but fissures opened up on each side of it. Lakagígar is part of a volcanic system centered on the Grímsvötn volcano and including the Þórðarhyrna volcano.[1][2][3] It lies between the glaciers of Mýrdalsjökull and Vatnajökull, in an area of fissures that run in a southwest to northeast direction. The system erupted over an eight-month period between 1783 and 1784 from the Laki fissure and the adjoining Grímsvötn volcano, pouring out an estimated 14 km3 (3.4 cu mi) of basalt lava and clouds of poisonous hydrofluoric acid and sulfur dioxide compounds that killed over 50% of Iceland's livestock population, leading to a famine that killed approximately 25% of the island's human population.[4]

The 13th Century volcanic explosion that may have triggered a 'Little Ice Age' and created a Far Eastern Pompeii just waiting to be discovered. Eruption thought to be from Samalas volcano on Indonesia's Lombok IslandBlast was so large that it left its mark in ice of the Arctic and the AntarcticHistorical evidence shows how it disturbed the climate for at least two yearsMystery city, preserved in same way as Pompeii, may be buried on the island By Ellie Zolfagharifard Published: 12:42 GMT, 1 October 2013 | Updated: 16:32 GMT, 1 October 2013 An Indonesian volcano is thought be the source of a massive ‘mystery eruption’- the largest that has occurred in the last 3,700 years. 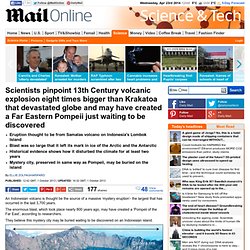 The enormous blast, which took place nearly 800 years ago, may have created a ‘Pompeii of the Far East’, according to researchers. They believe this mystery city may lie buried waiting to be discovered on an Indonesian island.