Vesuvius lava flows. #podclast □□ In 79 CE, the Roman citizens of Pompeii and Herculaneum believed that Mount Vesuvius was an extinct volcano. That is, until the mountain exploded—filling the sky with debris. This #podcast tells the tale of the last hours of Pompeii. Pompeii. Overhead Naples. The black circle in the middle is Vesuvius. The volcano that ate Pompeii… Pompeii: Vesuvius eruption may have been later than thought. Image copyright Getty Images Archaeologists in Italy have uncovered an inscription they say may show that the history books have been wrong for centuries. 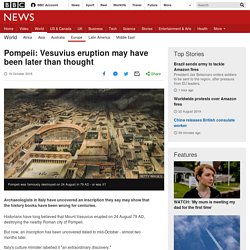 Historians have long believed that Mount Vesuvius erupted on 24 August 79 AD, destroying the nearby Roman city of Pompeii. But now, an inscription has been uncovered dated to mid-October - almost two months later. Italy's culture minister labelled it "an extraordinary discovery. " "The new excavations demonstrate the exceptional skill of our country," Alberto Bonisoli said. Historians have been able to date the eruption of Vesuvius with apparent certainty thanks to ancient writings that purported to share first-hand accounts. They came from Pliny the Younger, an elite lawyer and author of ancient Rome, who wrote about the death of his even more famous uncle, Pliny the Elder. According to his account, Pliny the Elder was then a fleet commander at Misenum - modern day Miseno - across the bay from Pompeii.

On this day 24th August 79 Vesuvius erupted, burying Pompeii and Herculaneum #JorgeNunez… History_of_Geology sur Twitter : "August 12, 1943, first seismic & volcanic activity is noted that will develop into the last eruption phase of Mount Vesuvius□, just in the midst of allied WWII-operations in Italy.

Herculaneum. Just as Pliny the Younger recorded the eruption column column of Vesuvius in AD79, describing how it flattened out when it reached the tropopause. He compared it to the shape of an Italian Stone Pine tree.… *****Great view of Popocatepetl (Mexico) in eruption yesterday, april 16. Photo: Juan Correa / Red Climatica Mundial… Pozzuoli and Solfatara. Bradyseism. Bradyseism is the gradual uplift (positive bradyseism) or descent (negative bradyseism) of part of the Earth's surface caused by the filling or emptying of an underground magma chamber and/or hydrothermal activity, particularly in volcanic calderas. 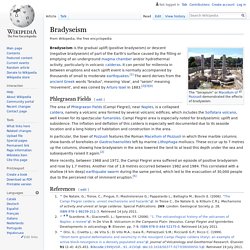 It can persist for millennia in between eruptions and each uplift event is normally accompanied by thousands of small to moderate earthquakes.[1] The word derives from the ancient Greek words "bradus", meaning 'slow', and "seism" meaning 'movement', and was coined by Arturo Issel in 1883.[2][3][4] Phlegraean Fields[edit] Pompeii Graffiti May Rewrite Time Line of Vesuvius Eruption. Incredible new discovery in #Pompeii of a horse in a villa outside the city walls near the Porta Nola. Narrowly missed by later robber tunnels, the horse was killed in the eruption, trapped in its stable. A plaster cast of the horse was made. #OnThisDay in 1631, Vesuvius erupted after a long dormancy. One of many accounts was printed the next week (Giovanni Orlandi Dell’incendio 1… "This study reveals, for the first time, the structure of a gas-filled reservoir 50 meters below the surface of the Solfatara c…

Living in the shadow of Italy's volcanoes. New #resources now available to accompany our award winning video #geographyteacher #volcano #sicily #naples. I discovered in #Pompei the little white stones in their roads act like cats eyes by reflecting the moonlight. In the shadow of Italy's volcanoes. On this day 24 Aug 79 Vesuvius erupts, burying Pompeii and Herculaneum. Six submerged volcanoes pose threat to Naples. The most notorious volcano in Europe is on fire, and now things are starting to get really freaky. Not a volcanic eruption, but it's hot! Recent temps & droughts led to #wildfires on #Vesuvius #Copernicus #Sentinel2. 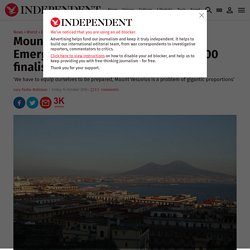 The plan is in its final stages and will be published by the end of the month, according to officials from Italy’s southern Campania region and Department of Civil Protection. The 25 at-risk towns are due to share their evacuation strategies in the next two weeks, and plans for seven newly identified “red zone” areas are being drawn up. “We have to equip ourselves to be prepared,” regional president Vincenzo De Luca told Italian press, “Mount Vesuvius is a problem of gigantic proportions.” A strategy to single out “priority areas” within the high-risk region are also underway. Last year, the eruption “red zone” was dramatically expanded from 550,000 residents in 18 towns, to 672,000 residents in 25. However despite the increased warnings, Mr De Luca said “alarmism is pointless”. Vesuvius: These surgeon's tools may look much newer but were actually discovered in Pompeii, they are almost 2000 years old!