7 Lessons From Harvard Innovation Lab. Little Black Book of Innovation_Book Summary. Where do good ideas come from? Disruptive entrepreneurs: An interview with Eric Ries. Digital technology has enabled the creation of new industries and upended many more. 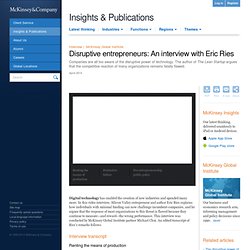 In this video interview, Silicon Valley entrepreneur and author Eric Ries explains how individuals with minimal funding can now challenge incumbent companies, and he argues that the response of most organizations to this threat is flawed because they continue to measure—and reward—the wrong performance. This interview was conducted by McKinsey Global Institute partner Michael Chui. Why SolarCity and Tesla are going to replace your utility. Millions of California homeowners and businesses have installed solar panels on their roofs to generate their own electricity. 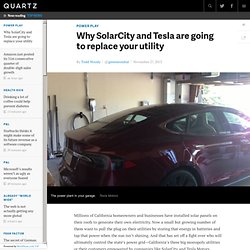 Now a small but growing number of them want to pull the plug on their utilities by storing that energy in batteries and tap that power when the sun isn’t shining. And that has set off a fight over who will ultimately control the state’s power grid—California’s three big monopoly utilities or their customers empowered by companies like SolarCity and Tesla Motors. SolarCity, the Silicon Valley solar installer, has quietly begun to offer some homeowners a lithium-ion battery pack made by electric carmaker Tesla to store electricity generated by their rooftop photovoltaic arrays. Stem, another Silicon Valley company, will sell or lease a $100,000, 54-kilowatt-hour battery pack to businesses so they can arbitrage the grid by storing electricity when rates are cheap and then using that energy when they’re high.

Power struggle: Green energy versus a grid that's not ready. Baba Shiv: How Do You Find Breakthrough Ideas? The human brain is a sophisticated instrument. 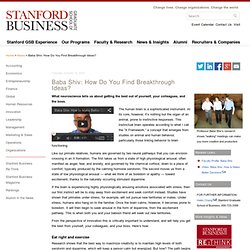 At its core, however, it’s nothing but the organ of an animal, prone to instinctive responses. This instinctual brain operates according to what I call the “X Framework,” a concept that emerges from studies on animal and human behavior, particularly those linking behavior to brain functioning. Integrative Thinking. Solve Your Most Wicked Business Problems Rotman’s Integrative Thinking™ programs provide leaders with new approaches and new tools to address organizational challenges creatively. 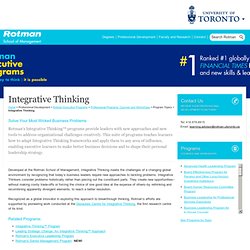 This suite of programs teaches learners how to adapt Integrative Thinking frameworks and apply them to any area of influence, enabling executive learners to make better business decisions and to shape their personal leadership strategy. Developed at the Rotman School of Management, Integrative Thinking meets the challenges of a changing global environment by recognizing that today’s business leaders require new approaches to tackling problems.

Integrative Thinkers consider problems holistically rather than piecing out the constituent parts. Google Reveals Its 9 Principles of Innovation. Ever wonder what makes the Google the holy grail of productivity and creativity? 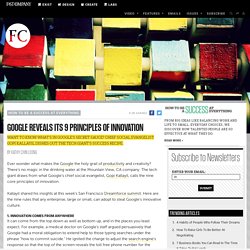 There's no magic in the drinking water at the Mountain View, CA company. The tech giant draws from what Google's chief social evangelist, Gopi Kallayil, calls the nine core principles of innovation. Kallayil shared his insights at this week’s San Francisco Dreamforce summit. Here are the nine rules that any enterprise, large or small, can adopt to steal Google’s innovative culture. Disruptive Innovation. The theory of disruptive innovation was first coined by Harvard professor Clayton M. 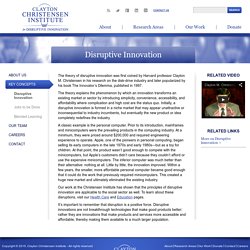 Christensen in his research on the disk-drive industry and later popularized by his book The Innovator’s Dilemma, published in 1997. The theory explains the phenomenon by which an innovation transforms an existing market or sector by introducing simplicity, convenience, accessibility, and affordability where complication and high cost are the status quo. Initially, a disruptive innovation is formed in a niche market that may appear unattractive or inconsequential to industry incumbents, but eventually the new product or idea completely redefines the industry. A classic example is the personal computer. Prior to its introduction, mainframes and minicomputers were the prevailing products in the computing industry. Stop Inbreeding Innovation - Scott Anthony.

By Scott Anthony | 12:09 PM March 30, 2012 It’s a topic that perhaps would only appear on the pages of The Economist: an effort to establish North America’s first elephant sperm bank. 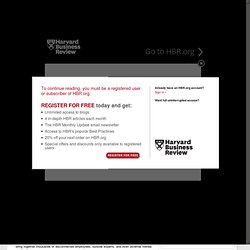 As the article notes, a single elephant named Jackson has “sired many of the calves born in the United States in the past decade, and scientists say new bloodlines are needed to avoid future inbreeding among his many progeny.” Inbreeding presents real problems. Recessive genes carrying debilitating diseases are more likely to pair. Problems perpetuate from generation to generation. Six Sigma 'killed' innovation in 3M. Loading... 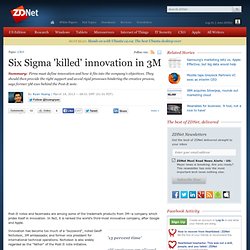 Please wait. Post-It notes and facemasks are among some of the trademark products from 3M--a company which prides itself in innovation. In fact, it is ranked the world's third-most innovative company, after Google and Apple. '15 percent time'3M employees are allowed to use 15 percent of their time to pursue their own research outside their usual course of work. That has been how many of its key products have come to light.Youngbae Park, head of 3M's Singapore R&D center, said the program has evolved to becoming a culture at the company such that no one really "counts" the time spent on the program.

Innovation has become too much of a "buzzword", noted Geoff Nicholson, 3M ambassador, and former vice president for international technical operations. Innovation. Innovation.