Chickpea and roast tomato fatteh recipe  Baked sausages, apples and blackberries with mustard and maple syrup recipe. Diana Henry's new (and easy) ideas for roast dinners. Potato gnocchi with sage and pecorino. Sirloin steak with anchovies and shallots. An apple a day? Put it to good use in these super savoury dishes. Venison pie with buttermilk mash recipe. 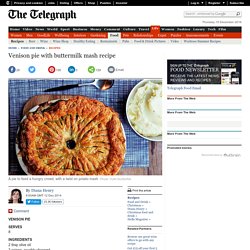 Turn up the heat, add the celery and cook briskly for a further five minutes or so, stirring often. In a frying-pan, fry the lardons in the rest of the oil over a medium heat until golden all over. Add to the onions, leaving behind the fat in the frying-pan. Cook the mushrooms briskly in the frying-pan to get a good colour. Pan-fried duck breasts with roasted grapes, farro and parsley recipe. Pumpkin and chilli macaroni cheese. Ham and tomato macaroni-cheese gratin from the Perigord. The best quinoa recipes. It's not a good idea to tell me I 'must try' something. 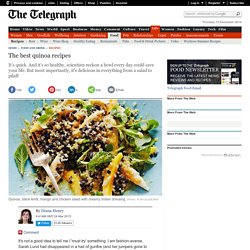 I am fashion-averse. Sarah Lund had disappeared in a hail of gunfire (and her jumpers gone to Oxfam) before I watched my first series of The Killing. And the kids collapsed in heaps when I told them I wasn't interested in 'twittering'. When it comes to food I'm even more contrary. Foods have to win me round. So you'll have heard of quinoa already (and I'm sure you know how to pronounce it, too). My first taste was disappointing, though. So what else is good about it apart from health benefits? I'm still dragging the kids with me ('Why can't we have rice? Diana Henry's easy crab and prawn dishes for lunch and dinner. Chicken piri-piri. Sweet potato mash with bacon lardons, fried egg and parsley pesto recipe. Preheat the oven to 180°C/350°F/gas mark 4. 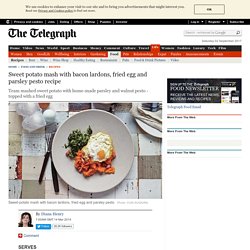 Put the sweet potatoes on a metal baking-sheet and bake for 40 minutes to an hour, depending on their size. They should be completely tender. Meanwhile, make the pesto. Put the parsley, garlic, nuts, half the parmesan and some salt and pepper in a food processor. Whizz, adding the olive oil. Halve the sweet potatoes and scoop out the flesh, discarding the skins. Fry the lardons in their own fat over a medium heat until golden all over. Quickly fry the eggs in olive oil until their edges are nicely golden. Diana Henry's ultimate pumpkin recipes. Diana Henry’s hot tips for summer entertaining. Oily fish recipes to boost your Omega-3 intake. New ideas for pies, from cod and chorizo to chestnut and mushroom. Diana Henry's easy pasta ideas for autumn. 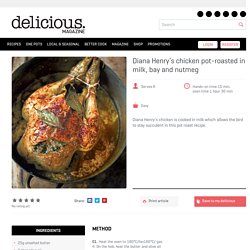 On the hob, heat the butter and olive oil in a lidded ovenproof pan that can hold the chicken. Season the bird with salt and pepper, tie the legs together if you want, then add to the pan and brown all over, using 2 big forks or wooden spoons to turn the chicken. Avoid piercing the skin and season as you go. Pour off the fat. Recipe from Diana Henry's A Bird in the Hand. Diana says: “I’ve never been keen on the Italian dish of pork cooked in milk, but I was convinced to try this chicken version by Faith Durand, who runs thekitchn.com in the States. Sticky orange chicken with parsnips, maple & pecans recipe. Chicken, bacon and spinach sausage rolls. ​Brown rice bowl with chilli-fried pumpkin, black beans and avocado. Potato, garlic and rocket soup with chilli oil. Diana Henry’s barbecued poussins with za’atar and pumpkin hummus  Tuna tartare with capers, pinenuts and orange. Diana Henry's easy crab and prawn dishes for lunch and dinner. 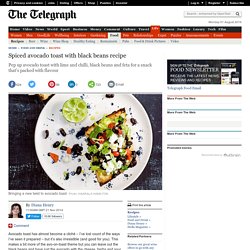 ​Brown rice bowl with chilli-fried pumpkin, black beans and avocado. Puff pastry tart with smoked bacon, onion and potato. Roast yogurt-marinated chicken recipe. Using good kitchen scissors, cut through the flesh and bone along both sides of the backbone from the tail to the head. 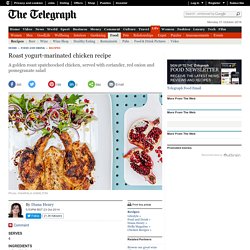 Remove the backbone and keep it for stock (freeze until you’ve gathered three or four). Open the chicken, turn it over, then flatten it by pressing hard on the breastbone with the heel of your hand. Remove any big globules of fat and neaten any ragged bits of skin. Now you have a spatchcocked bird. Mix together the yogurt, lemon, olive oil, garlic and cayenne to make a marinade. Preheat the oven to 200°C/400°F/gas mark 6. Lift the chicken out of its marinade, gently shaking off the excess.

Slice the red onion very finely (a mandolin is ideal). Prawn, fennel and tomato pilaf with feta, parsley and mint. Piri piri chicken. Whenever I go to Portugal my first pit stop is the same: a chicken piri piri restaurant that is little more than a shack (there are no real walls, just bits of matting hung on a frame) at the side of a dusty road. 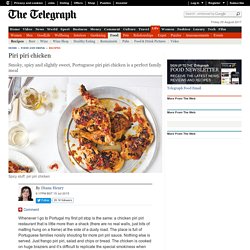 The place is full of Portuguese families noisily shouting for more piri piri sauce. Nothing else is served. Pappardelle with cavolo nero, orange, chilli and garlic. Baked sausages with beans, eggs and feta. One pot lamb and bulgur pilaf with figs. Potato, garlic and rocket soup with chilli oil. One pot ginger-miso roast pumpkin and mushrooms. Puff pastry tart with smoked bacon, onion and potato. Braised chicken with olives and pine nuts recipe. 2 garlic cloves zest of 1 small orange, removed in strips (cut away any bitter white pith) leaves from about 10 stems of mint, torn Preheat the oven to 180°C/350°F/gas mark 4.Heat the olive oil in a wide oven-proof sauté pan or shallow casserole (large enough to hold the chicken in a single layer – or use two) and brown the chicken on both sides, seasoning as you go. 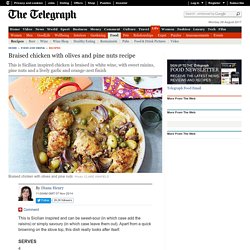 You are just trying to get a good colour, not cook the chicken through. Remove the joints to a dish as they’re ready. Pour off all but 1 tbsp of oil from the pan and add the onions. Cook over a medium heat to colour, then add the celery, cooking for two minutes before adding the garlic and chilli. Add the capers and olives 15 minutes before the end of the cooking time, stirring them in around the chicken joints. Prawn, fennel and tomato pilaf with feta, parsley and mint. Spiced stuffed Persian fish. Sweet potato mash with bacon lardons, fried egg and parsley pesto recipe. Pappardelle with cavolo nero, orange, chilli and garlic.

Cancel the takeaway: quick Indian dishes to make at home. Having scarfed the lot I notice the bill. 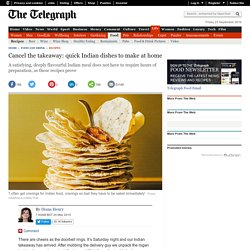 It always provokes a sinking feeling – for the same money I could have made an Indian feast. But I often get cravings for Indian food, cravings so bad they have to be sated immediately. As I place my takeaway order it isn’t just hunger that has to be fed but a longing for biting chillis, earthy cumin, the bitter undertone of turmeric. Sometimes it takes me a good half hour even to find the spices (my spice drawers are as shambolic as a teenager’s bedroom). Surely Indian cooks don’t go through this every night? First she advises me to keep the spices most commonly used in a tin on the kitchen counter, as her mother taught her to do. 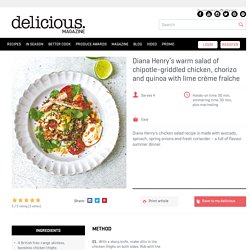 Pilaf of aubergine, cauliflower and dates with harissa yogurt. Salmon en papillote recipe. • ½ small fennel bulb • 40g butter • 8 sprigs dill, half of them chopped • 4 fillets of salmon (thick pieces from the centre of the salmon) about 140g each • 4 tbsp dry white vermouth Cook the potatoes in boiling water until they are softening but not completely tender through to the centre.

Preheat the oven to 200C/gas mark 6. Trim any little fronds from the fennel and reserve. Cut out eight squares of greaseproof or baking parchment, each roughly 40x40cm, and set them on top of each other in pairs to make four double-layered parcels. Brush the middle of each top layer with butter. Put the salmon fillets on top of the vegetables, season and pour on the rest of the butter.

Carefully bring two sides of the parcel together, folding them over to seal the edges, to make a kind of tent. Place on a metal baking sheet and cook for 25 minutes, until the fish is cooked through. White bean soup with spinach. Chicken with marsala, olives and blood oranges. Turkish-spiced chicken thighs with coriander relish. Roast sausages, mushrooms and sweet potatoes.