Chicken Piccata recipe. Rack-Roasted Chicken with Gravy Potatoes. Despite what you’ve read or choose to believe, there are lots of good ways to roast a chicken. 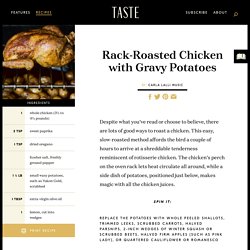 This easy, slow-roasted method affords the bird a couple of hours to arrive at a shreddable tenderness reminiscent of rotisserie chicken. The chicken’s perch on the oven rack lets heat circulate all around, while a side dish of potatoes, positioned just below, makes magic with all the chicken juices. Spin It: Replace the potatoes with whole peeled shallots, trimmed leeks, scrubbed carrots, halved parsnips, 2-inch wedges of winter squash or scrubbed beets, halved firm apples (such as Pink Lady), or quartered cauliflower or Romanesco Smoked paprika, Aleppo pepper, ground cumin, or crushed fennel seeds in place of either the paprikaor the oregano. Nigerian Pepper Soup. Chicken Pot Pie Hand Pies With Tarragon-Buttermilk Sauce. There are a fair number of steps to this recipe. 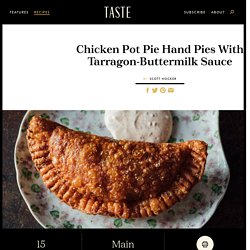 It is a restaurant dish, after all. Like most restaurant dishes, though, much can be made ahead and assembled as you need it. If you want to bake these, do so at 400℉ for about 30 minutes, flipping them before the last 10 minutes. (Frankly, they’re a lot better fried. Grilled Chicken with Mustard Barbecue Sauce and Tomato Salad recipe. 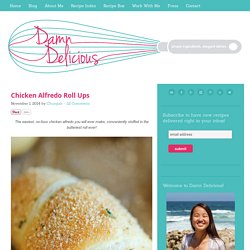 Have you ever tried those tubes of crescent rolls before? Because if you haven’t, you’re really missing out. Crescent rolls are one of the most versatile ingredients ever, and they’re so easy to use too. I’ve made pigs in a blanket, mummy hot dogs and even pizza roll ups using these, although the crescent rolls itself are pretty darn good. But nothing really tops this creation here with the most epic filling of all: chicken alfredo. It is the most amazing, creamiest filling you will ever have, loaded with Parmesan-garlicky goodness, all neatly wrapped up in a buttery crescent roll. Individual Chicken Pot Pies. Comfort food chockfull of leeks and asparagus. 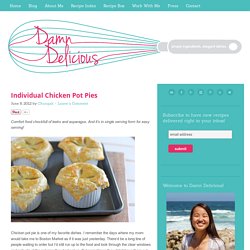 And it’s in single serving form for easy serving! Chicken pot pie is one of my favorite dishes. I remember the days where my mom would take me to Boston Market as if it was just yesterday. There’d be a long line of people waiting to order but I’d still run up to the food and look through the clear windows and salivate at the pot pies they had set up. But sometimes they didn’t have them out, which meant that they were either sold out or it’d be another 20-30 minutes before the new ones would be ready. Who knew that sold out pot pies would kill a kid’s spirit? But now that I’ve found this fail-proof chicken pot pie recipe from Lindsay over at Pinch of Yum, I can make these pies right at home whenever I’m craving it, that way I don’t have to live through the torment of my childhood Boston Market days.

So here’s how you make this: Let’s first start by slicing up some leeks and giving them a good rinse in a bowl of water. Greek Lemon Chicken Soup Recipe. Jasmine Chicken Soup with Green Tea Soba Recipe. 1. 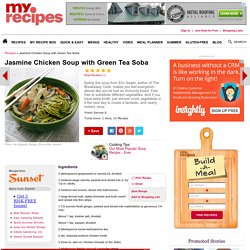 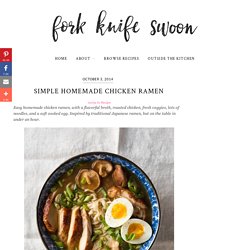 Inspired by traditional Japanese ramen, but on the table in under an hour. The Honey’s parents are American ex-pats living abroad in Tokyo, Japan, and while visiting them over the last seven or eight years, he’s collected dozens of favorite eateries throughout the city. There’s the best izakaya in Kichijoji, serving up casual Japanese pub food, and countless kiten-zushi restaurants, where my English-speaking Honey can choose small plates of freshly-made sushi from a moving conveyor belt without having to order in Japanese. He always makes sure to buy at least one Pocari Sweat from a vending machine (think Japanese gatorade), and of course, there’s his favorite ramen shop in Shinjuku, a tiny, crowded restaurant with a line out the door. Paintings of pigs adorn the walls, and big, steaming bowls of pork ramen are served to hungry patrons at a single bar counter. Print. Stuffed Matzoh Ball Soup with Chicken and Apples recipe. Chicken and Biscuits Recipe. 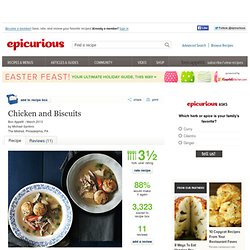 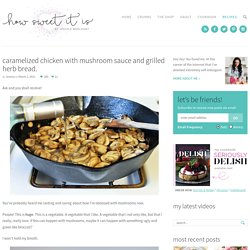 You’ve probably heard me ranting and raving about how I’m obsessed with mushrooms now. People! This is huge. This is a vegetable. A vegetable that I like. I won’t hold my breath. This is the dinner that I made on Sunday night after asking for your suggestions. Baked Chicken and Rice Recipe. Soy-Basted Chicken Kebabs With Sesame-Citrus Sprinkle recipe. Bacon Bourbon BBQ Chicken Kebabs. Pulled Chicken with Cherry Chile Barbecue Sauce Photo - Slow Cooker Classics Recipe. Quick Sesame Chicken With Broccoli recipe. Slow Cooker Cashew Chicken. A Chinese takeout favorite made right in your crockpot and all you need is 10 min prep. 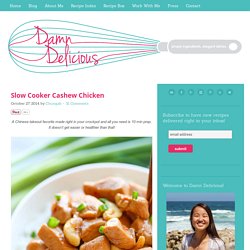 It doesn’t get easier or healthier than that! If you’ve been following Damn Delicious for awhile now, you know that I love creating Chinese takeout favorites. It’s just so much healthier to make right at home since you know exactly what’s going into your dish. Plus, making these dishes at home can be quicker than waiting for 45-min delivery. Crock Pot Honey Mustard Chicken - Served From Scratch. A super flavorful, easy, weeknight Crock Pot Honey Mustard Chicken is the perfect protein for any meal. 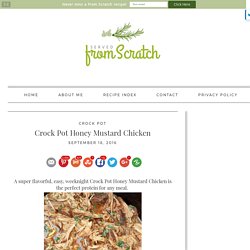 Have I mentioned how “Quick and Easy” is the theme in our house for dinner, lately? I loved our Crock Pot before, but now, oh now, it’s a life saver. This whole working mom thing is seriously kicking my ass. Shout out to all the other working moms out there to little ones. Slow Cooker Chicken Teriyaki. You can throw all of the ingredients in the crockpot in this no-fuss, super easy chicken teriyaki dish! I have to be honest with you guys. Slow cooker recipes are not easy to photograph. They’re usually blobs of shredded meat and there’s only so much you could do to make it pretty – no matter how much tweezer-activity is involved! Slow Cooker Chicken Teriyaki Recipe. Chicken Teriyaki - Low Calorie - Munaty Cooking. I love Japanese food, it’s healthy, quick, and tasty, just like this Chicken Teriyaki. I like the fact that most Japanese food is low in calories, which might be the reason why you get hungry after having a meal.

I used to think that, Japanese and Chinese food are the same, with a slight difference, but when you start cooking dishes from both cuisines, you find that they are quite different. Chicken thighs are what usually used to make Chicken Teriyaki, but I’m using chicken breast in this recipe. There is no harm in using chicken thighs, in fact, the calorie count is not that different between the breast and thigh. The reason why I’m using breast is to teach those who rather use chicken breast, how to cook it while keeping the breast texture tender and juicy from the inside.

This dish is served with white rice, using your Rice Cooker while making the chicken Teriyaki will save time. Sticky Garlic Chicken Bites. These easy baked chicken nuggets are sweet, sticky, and just finger-licking amazing! Bite-sized chicken pieces made to absolute crisp-perfect and smothered in the most amazing sweet and sticky sauce.

Do you need any more convincing? Error loading player: No playable sources found No, but really, not only are these finger-licking good but these babies are also baked, not fried, saving you on a ton of calories and some of that artery-clogging goodness. Baked Sweet and Sour Chicken. No need to order take-out anymore – this homemade version is so much healthier and a million times tastier! I am a complete sucker for sweet and sour chicken when it comes to take-out. But it’s been hard to find a place that has it down perfectly – crisp on the outside yet completely juicy and flavorful with a sweet and sour punch. Thankfully, I found a homemade version from Mel’s Kitchen Cafe that has it down to a tee.

What makes this recipe so perfect is that the chicken is first fried to get that crisp exterior. Sweet and Spicy Chicken Recipe. Double Crunch Honey Garlic Chicken Breasts - millions of views online! Double Crunch Honey Garlic Chicken Breasts Do these honey garlic chicken breasts look good or what? They should. The original pork version of this recipe Double Crunch Honey Garlic Pork Chops was posted one year ago this week and very quickly grew to being the most popular recipe ever on Rock Recipes with just over 117,000 views to date. (2017 update: now several million times!) It has been among the most commented upon and possibly the most raved about recipe I have ever posted too and for very good reason. It seems everyone who tried them loved them and made them over and over again.

Made the green sauce per the recipe and dang, was it outstanding. The cucumber avocado salad was devine (though my partner felt the cilantro was out of place), and mixing some of the green sauce in made it better. Like epi suggests, it's a sauce that would be great with any number of things. Greek Chicken – Paleo.

I love the tang of lemony, garlicky Greek chicken. This recipe does not disappoint. 413 calories. Grilled Chicken Breasts Stuffed With Herb Butter Recipe. Grilled Chicken Breasts with Chive and Herb Butter Recipe. Lemon Chicken. When Tuttle Publishing asked me if I would like to review Bee Yinn Low’s first cookbook last month (Bee is the author of the popular Asian recipe website Rasa Malaysia.com), I was thrilled and accepted immediately because this was the cookbook that I was eying on to get my own copy.

The best part was I didn’t have to wait until it’s officially released (September 10, 2011)! I had several reasons why I was looking forward to this cookbook. First of all, I have always wanted to cook delicious Chinese food for my husband. Yogurt-Marinated Grilled Chicken Recipe. Chicken Breast with Herb Butter. Fried Chicken Biscuits recipe. Pretzel-Crusted Chicken Cutlets With Cauliflower Purée and Arugula recipe. Lemon Butter Chicken. 5 Ingredient Breaded Lemon Chicken Recipe. Buttermilk Fried Chicken Fingers Recipe. I like the looks and sense of this recipe and it is working as I write. So a few ideas and pointers: 1. I have been cooking by instinct, grandma's way, for about 55 years and I have learned that you should never trust anyone else's recipes except your own. 2.

Any experienced cook would automatically see that the amount of liquid in this recipe (over a quart-and-a-half) is way out of line. Those cooks who just follow other's directions are going to be disappointed and complain. Instinct cooks adapt by either putting the chicken in a good, food grade, resealable bag or spread in one layer in a baking dish or the like, sense how much liquid will cover the stuff, figure proportions, mix it in a bowl and pour it over the chicken. Glazed Fried Chicken With Old Bay and Cayenne recipe. Tea-Brined Buttermilk Fried Chicken and Gravy recipe. Turkey Gravy Without the Drippings. We usually smoke our turkey which means I don’t have any drippings for my gravy.

Trust me I have tried to make gravy with the smoked turkey drippings and it was disgusting. This easy to make Turkey Gravy Without the Drippings is just as delicious with rich dark brown flavor. Because holiday cooking is crazy enough I made the gravy the day before, saved some of the broth and added it to thin out the gravy. What a relief it was to already have this made and in the refrigerator waiting for me. I do the same with mashed potatoes. Bourbon and Brown Sugar Glazed Turkey recipe. Rachel Schultz: BROWN SUGAR SPICED BAKED CHICKEN. Slow Cooker Jerk Chicken - Immaculate Bites. Cook Once, Eat Twice: Slow Cooker Pulled Chicken Sandwiches. Herb Grilled Chicken Wings recipe. Nashville-Style Hot Chicken recipe. Butterflied Chicken with Herbs and Cracked Olives recipe.