Water-day-infographic-715x1024.jpg (JPEG Image, 715 × 1024 pixels) - Scaled (97%) The case against waiting for Generation IV nuclear… and the case for urgently bringing it to commercialisation. Slowly, slowly, ever so slowly, awareness is growing that there is some incredible new technology in nuclear power; Generation IV uranium reactors, and thorium fuelled reactors. 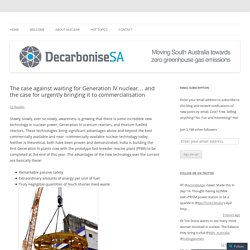 These technologies bring significant advantages above and beyond the best commercially available and near –commercially available nuclear technology today. Neither is theoretical, both have been proven and demonstrated. India is building the first Generation IV plants now with the prototype fast breeder reactor plant (PFBR) to be completed at the end of this year. The advantages of the new technology over the current are basically these: Remarkable passive safetyExtraordinary amounts of energy per unit of fuelTruly negligible quantities of much shorter lived waste The thermal baffle being lowered into the 500 MWe Prototype Fast Breeder Reactor in India, May 2010. For those less familiar with the technology to which I am referring, this article by Tom Blees will bring you nicely up to speed. Energy density of thorium vs uranium. Coal: Does it have a Future in the Face of the Nuclear Challenge? Share this page: To the question, does coal have a future in the face of the nuclear challenge, the simple answer is YES! 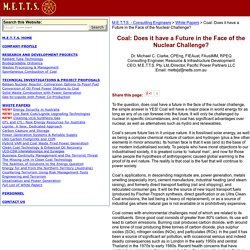 Coal will have a major place in world energy for as long as any of us can foresee into the future. It will only be challenged by nuclear in specific circumstances, and coal has significant advantages over nuclear, as well as alternatives such as hydro and renewables. Coal’s secure future lies in it unique nature. It is fossilised solar energy, as well as being a complex chemical mixture of carbon and hydrogen (plus a few other elements in minor amounts). [Full Report] Coal mining polluting south kalimantan water by Greenpeace Indonesia. Nuclear Materials in Coal Ash by Vladimir Xyro. Cadangan Batubara Indonesia Akan Habis. TEMPO Interaktif, Jakarta - Cadangan batubara Indonesia terancam habis dalam 20 tahun lagi, jika tidak dikelola dengan sistem penambangan yang benar. 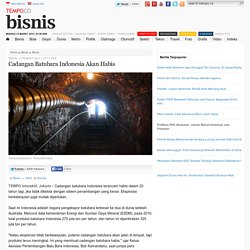 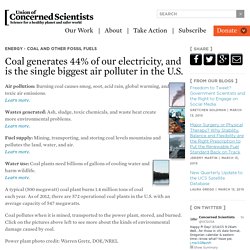 Learn more. Climate change. Environmental impact of the coal industry. A coal surface mining site in Bihar, India A mountaintop removal mining operation in the United States There are severe health effects caused by burning coal.[2][3] According to the reports issued by the World Health Organization in 2008 and by environmental groups in 2004, coal particulates pollution are estimated to shorten approximately 1,000,000 lives annually worldwide, including nearly 24,000 lives a year in the United States.[4][5] Coal mining generates significant additional independent adverse environmental health impacts, among them the polluted water flowing from mountaintop removal mining. 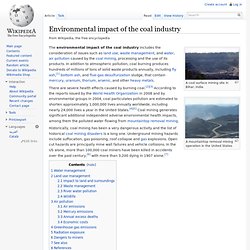 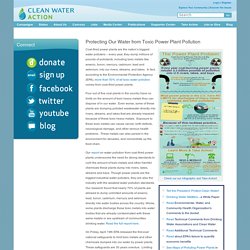 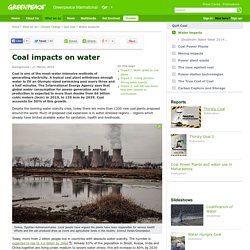 Much of proposed coal expansion is in water stressed regions – regions which already have limited available water for sanitation, health and livelihoods. Turkey, Ogulhan-Kahramanmaras. Local people have argued the plants have been responsible for serious health effects and the ash produced dries up rivers and agricultural lands in the locality. ©Umut Vedat/Greenpeace Today, more than 2 billion people live in countries with absolute water scarcity. The 'water grab' by the coal industry will inevitably lead to water conflicts between people and environmental needs.

Coal Ash Is More Radioactive than Nuclear Waste. The popular conception of nuclear power is straight out of The Simpsons: Springfield abounds with signs of radioactivity, from the strange glow surrounding Mr. 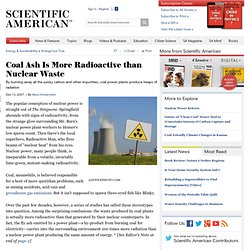