Drooping trees may actually be sleeping. Much like humans curling up to go to sleep at night, trees may relax their limbs at night to rest, The Washington Post reports. 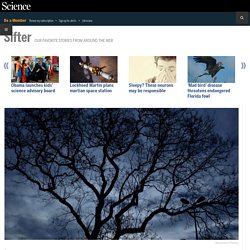 Although scientists have known that tree leaves and other plants follow a circadian rhythm, this is the first evidence that an entire tree could be resting at night like other organisms. 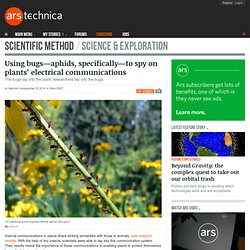 With the help of tiny insects, scientists were able to tap into this communication system. Their results reveal the importance of these communications in enabling plants to protect themselves from attack by insect pests. Like any organism, plants need to transport essential nutrients from one part to another. Chloroplasts, the plant powerhouses, send signals to roots. For more than a billion years, plants have had an internal dialogue, and we are just beginning to learn the words. 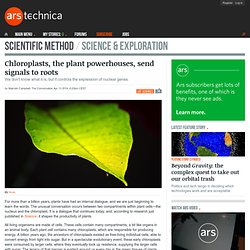 The unusual conversation occurs between two compartments within plant cells—the nucleus and the chloroplast. It is a dialogue that continues today, and, according to research just published in Science, it shapes the productivity of plants. All living organisms are made of cells. These cells contain many compartments, a bit like organs in an animal body. Each plant cell contains many chloroplasts, which are responsible for producing energy. Microscopic images of flowers reveal alien landscapes on petals, pollen grains and leaves. Smoke signals: How burning plants tell seeds to rise from the ashes.

The buzz and the bees: Insects use flowers' electrical fields to locate them... with voltage indicating pollen. Flowers use electrical signals which work alongside their physical attributes This enhances their advertising power to beesScientists studied almost 200 bees collecting pollen from petunias By Anthony Bond Published: 19:05 GMT, 21 February 2013 | Updated: 20:48 GMT, 21 February 2013 Seeing a large bumblebee inside a bright flower is a common sight over the warm summer months. 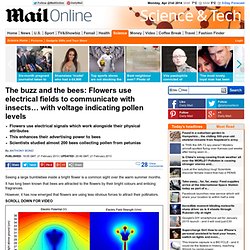 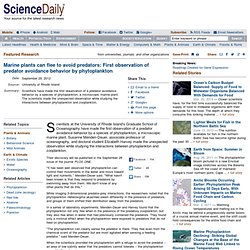 Susanne Menden-Deuer, associate professor of oceanography, and doctoral student Elizabeth Harvey made the unexpected observation while studying the interactions between phytoplankton and zooplankton. Their discovery will be published in the September 28 issue of the journal PLOS ONE. "It has been well observed that phytoplankton can control their movements in the water and move toward light and nutrients," Menden-Deuer said. "What hasn't been known is that they respond to predators by swimming away from them. It's a trap! The Australian sundew plant that uses tentacles to catapult its prey to their death. Astonishing plant can capture flies in just 400 millisecondsBelieved to be the fastest and most spectacular trapping mechanism ever seen in the plant world By Mark Prigg Published: 18:33 GMT, 2 October 2012 | Updated: 18:42 GMT, 2 October 2012. 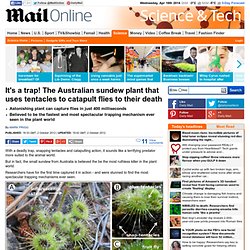 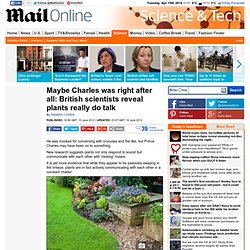 Come For the Beautiful “Glass Gem” Corn; Stay for a Dose of Genetics. A Rose is a Rose, Until it Isn’t: Five Reasons Plant DNA is Totally Crazy. Credit: SP Veres/sxc.hu You may not give your houseplants enough credit. 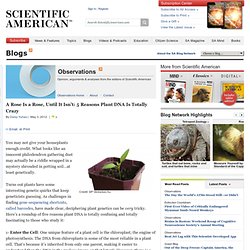 What looks like an innocent philodendron gathering dust may actually be a riddle wrapped in a mystery shrouded in potting soil…at least genetically. Turns out plants have some interesting genetic quirks that keep geneticists guessing. Why buttercups reflect yellow on chins: Research sheds light on children’s game and provides insight into pollination. Scientists have found that the distinctive glossiness of the buttercup flower (Ranunculus repens), which children like to shine under the chin to test whether their friends like butter, is related to its unique anatomical structure.

Their findings were published December 14, in the Royal Society journal Interface. Annual Plants Converted Into Perennials. Annual crops grow, blossom and die within one year. 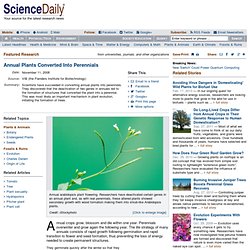 Perennials overwinter and grow again the following year. The life strategy of many annuals consists of rapid growth following germination and rapid transition to flower and seed formation, thus preventing the loss of energy needed to create permanent structures. Scientists discover 'switch' in plants to create flowers. Flowering is the most crucial act that plants undergo, as the fruits of such labor include crops on which the world depends, and seeds from which the next generation grows.

While classic experiments have demonstrated that plants are able to adjust the timing of their flowering in response to environmental conditions, such as light, temperature and the availability of nutrients, very little has been known about what exactly triggers plants to make flowers instead of leaves, under various environmental conditions. Now, a team of researchers from the National University of Singapore (NUS) has discovered how this happens. The team, led by Associate Professor Yu Hao from the Department of Biological Sciences at the NUS Faculty of Science, has identified a protein that is essential for flowering under normal light conditions.

The team's findings are published April 17 in the online, open-access journal PLoS Biology. Clock gene helps plants prepare for spring flowering, study shows. Insight into plants' body clocks shows how they adjust to changing seasons, causing flowers to bloom in spring. University researchers tested computer models of gene networks in a simple cress plant to determine the role played by a protein, known as TOC1, in governing these daily cycles.

The model shows how 12 genes work together to run the plant's complex clockwork, and reset the clock at dawn and dusk each day. Researchers found that the TOC1 protein, which was previously linked to helping plants wake up, is in fact involved in dampening gene activity in the evening. This helps plants stay dormant at night. Contradictory finding "The 24-hour rhythms of biological clocks affect all living things including plants, animals and people, with wide-ranging effects on sleep, metabolism and immunity," said Professor Andrew Millar of the School of Biological Sciences. The findings contradict what scientists had previously understood about the gene and its role in early morning activity.