Plant Biology. Why manchineel might be Earth's most dangerous tree. The manchineel tree may be endangered, but so is anyone who messes with it. 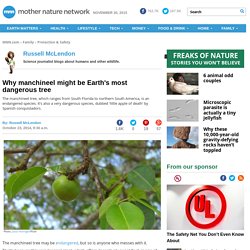 That's because this rare tropical plant, which offers deceptively sweet fruit, is one of the most poisonous trees on Earth. Manchineels are notorious in their native habitats, the sandy soils and mangroves of South Florida, the Caribbean, Central America and northern South America. Many are labeled with warning signs like the one pictured below. But aside from poisoning the occasional conquistador, tourist and literary character, manchineel is relatively obscure considering it holds the world record for most dangerous tree. Ashikaga Flower Park, Japan. The Japanese love flowers, and wisteria are among their favorites. 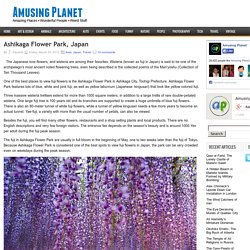 Wisteria (known as fuji in Japan) is said to be one of the archipelago's most ancient noted flowering trees, even being described in the collected poems of the Man'yoshu (Collection of Ten Thousand Leaves). One of the best places to view fuji flowers is the Ashikaga Flower Park in Ashikaga City, Tochigi Prefecture. Ashikaga Flower Park features lots of blue, white and pink fuji, as well as yellow laburnum (Japanese: kingusari) that look like yellow colored fuji. Three massive wisteria trellises extend for more than 1000 square meters, in addition to a large trellis of rare double-petaled wisteria.

Flower Skeleton design by I&S BBDO ad agency. In the terrifying wake of 2011 the Tōhoku earthquake and tsunami in Japan, funerals become a commonplace ordeal as the nation dealt with unprecedented loss. 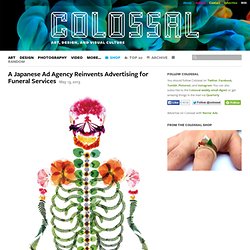 Like most cultures, Japanese funerals are somber affairs punctuated with black and white with any deviation considered taboo or inappropriate. Reflecting on the enormity of recent events, funeral home Nishinihon Tenrei approached Tokyo-based ad agency I&S BBDO to create an ad for a trade show that would buck the trend of muted colors so prevalent in the industry.

The agency responded with this unprecedented figure of a skeleton made with pressed flowers that overtly celebrates the cycle of life by introducing color and elements of nature that are often avoided in such services. The image was considered so successful it went on to win a design merit award from the 2013 One Club Awards. You can see it in even higher resolution here. Female Ginkgo reproductive organs. Sunlight. Pseudanthium. "Flower head" redirects here. 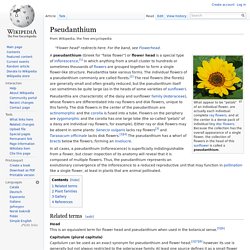 For the band, see Flowerhead. What appear to be "petals" of an individual flower, are actually each individual complete ray flowers, and at the center is a dense pack of individual tiny disc flowers. Because the collection has the overall appearance of a single flower, the collection of flowers in the head of this sunflower is called a pseudanthium. A pseudanthium (Greek for "false flower") or flower head is a special type of inflorescence,[1] in which anything from a small cluster to hundreds or sometimes thousands of flowers are grouped together to form a single flower-like structure.

Pseudanthia take various forms. Christmas Tree Statistics. Decorating the family Christmas tree is a cherished tradition for most families that is passed down from generation to generation. 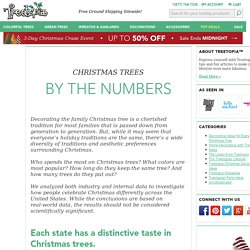 But, while it may seem that everyone’s holiday traditions are the same, there’s a wide diversity of traditions and aesthetic preferences surrounding Christmas. Who spends the most on Christmas trees? What colors are most popular? How long do they keep the same tree? And how many trees do they put out? We analyzed both industry and internal data to investigate how people celebrate Christmas differently across the United States. Each state has a distinctive taste in Christmas trees. In every state, the single most popular color for an artificial christmas tree is green, though there’s more to the story than that. White trees tend to dominate the midwest and south, while some northeastern states prefer silver. The 9 Rarest Plants in the World.

We've all heard about the most endangered animals. 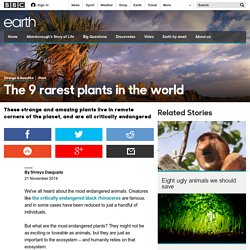 Creatures like the critically endangered black rhinoceros are famous, and in some cases have been reduced to just a handful of individuals. But what are the most endangered plants? They might not be as exciting or loveable as animals, but they are just as important to the ecosystem – and humanity relies on that ecosystem. Here are nine of the most threatened plants today. Forest overgrown with wild garlic in Kaiserstuhl, Germany. 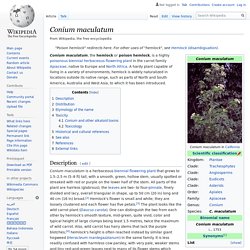 A hardy plant capable of living in a variety of environments, hemlock is widely naturalized in locations outside its native range, such as parts of North and South America, Australia and West Asia, to which it has been introduced. Description[edit] Hemlock can grow to a height of 1.5 to 3 meters. Conium maculatum is a herbaceous biennial flowering plant that grows to 1.5–2.5 m (5–8 ft) tall, with a smooth, green, hollow stem, usually spotted or streaked with red or purple on the lower half of the stem.

It has become endemic in Asia, North America, Australia and New Zealand.[5][6][7] The plant is often found in poorly drained soil, particularly near streams, ditches and other watery surfaces. Distribution[edit] Etymology of the name[edit] Extinct tree grows anew from ancient jar of seeds. Most Beautiful Forests in The World. Bluebells in Halle`s forest, Belgium. 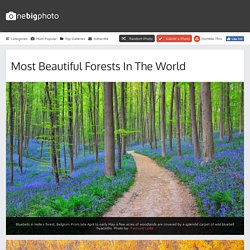 From late April to early May a few acres of woodlands are covered by a splendid carpet of wild bluebell hyacinths. Photo by: Raimund Linke Thick grove of poplar trees, Oregon. Photo by: David Thompson. 15 Famous Living Trees. There are probably hundreds of famous living trees in the world. 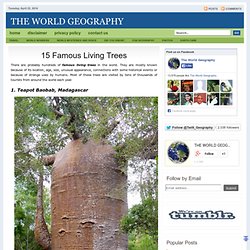 They are mostly known because of its location, age, size, unusual appearance, connections with some historical events or because of strange uses by humans. Most of these trees are visited by tens of thousands of tourists from around the world each year. 1. Teapot Baobab, Madagascar Teapot Baobab takes the form of bottle and also looks like teapot, which is why its name has teapot in it. Misty Forest. Language of Flowers.

The language of flowers, sometimes called floriography, is a means of cryptological communication through the use or arrangement of flowers. Meaning has been attributed to flowers for thousands of years, and some form of floriography has been practiced in traditional cultures throughout Europe, Asia, and the Middle East. Plants and flowers are used as symbols in the Hebrew Bible — particularly of love and lovers in the Song of Songs,[1] as an emblem for the Israelite people[2] and for the coming Messiah[3] — and of Jesus Christ in the New Testament.[4] In Western Culture, William Shakespeare ascribed emblematic meanings to flowers, especially in Hamlet, Prince of Denmark. Interest in floriography soared in Victorian England and in the United States during the 19th century. History[edit] Floriography was popularized in France about 1810–1850, while in Britain it was popular during the Victorian age (roughly 1820–1880), and in the United States about 1830–1850. Meanings[edit] See also[edit] 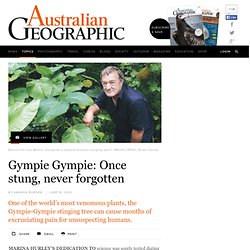 The entomologist and ecologist’s first encounter with the Gympie-Gympie stinging tree produced a sneezing fit and left her eyes and nose running for hours. Even protective particle masks and welding gloves could not spare her several subsequent stings – one requiring hospitalisation – but that was nothing compared with the severe allergy she developed. Pollenators, a plant's go-betweens. 'Blow Up' by Ori Gersht. Time After Time & Blow Up [2007] 'Exploding Flowers' by Qi Wei. Gerbera We've all seen flowers beautifully displayed in our local market or flower shop, but never have we seen them exploding like this!

Qi Wei is not a botanist but a curious photographer who, one day, came across Todd McLellan's Disassembly series. It got him thinking. "Todd McLellan's Disassembly shows a wonderful different viewpoint of man-made objects which inspired me to think if it could be applied to the natural world," Wei tells us. 'Falling Garden' by Gerda Steiner and Jörg Lenzlinger. Cocora valley, Colombia. 'Wald' by Jürgen Heckel. Flower Photography by Katinka Matson. Poppy Pictures