Below Hits PS4 April 7, New “Explore” Mode Added. We’re super excited to finally announce that Below, our dark & deadly dungeon crawler, is coming to PlayStation 4 in two weeks, April 7th, along with a brand new mode called Explore, geared for players who enjoy adventure and discovery. 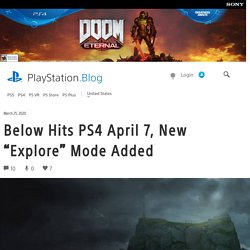 If you’re hearing about Below for the first time, here’s a quick primer: Below is our survival-roguelike; a dungeon crawler with no hints or tutorials, and a quiet world, which offers no guidance, aside from the game’s title. You play the role of a Wanderer, one of many, who arrives on a forbidden island to explore its unfathomably deep, dangerous underworld. Reaching the bottom of The Depths and discovering what lies below is your sombre quest, but from the moment your sailboat touches The Isle’s sacred shore, you are on your own… Fans who have already played Below know it is uniquely brutal; originally designed to be an unforgiving killing machine, with a challenge that appeals to the kind of player who relishes extreme video game punishment. How Bethesda plans to pull players back to 'Prey' ‘Elder Scrolls: Blades’ is an RPG you can play anywhere.

'Hellblade' is a terrifying journey through one person's mental hell. The best mobile games. Gift guide: PlayStation 4 Games worth giving. From Paintbox to PC: How London became the home of Hollywood VFX. In a darkened room on the backstreets of London's red light district, Mike McGee stared at a screen. 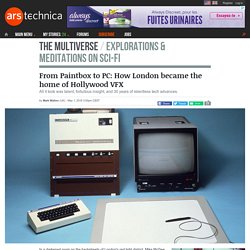 Surrounded by a thick wall of cigarette smoke and impatient chain-smoking clients, he swiped a pen across the table, his movement replicated with surprising accuracy as a pixel-perfect line on the screen above. These surrealist games melt more than clocks. Some say surrealism was the most influential art movement of the past century and, perhaps unsurprisingly, it's had an effect on video game developers too. 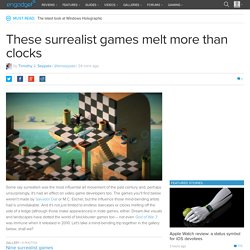 The games you'll find below weren't made by Salvador Dalí or M.C. Escher, but the influence those mind-bending artists had is unmistakable. And it's not just limited to endless staircases or clocks melting off the side of a ledge (although those make appearances) in indie games, either. Dream-like visuals and landscapes have dotted the world of blockbuster games too -- not even God of War 3 was immune when it released in 2010. Let's take a mind-bending trip together in the gallery below, shall we? Gallery | 9 Photos Nine surrealist games + See all 9 Apple iPad Air 2 Form factor Tablet Operating system iOS (8) Screen size 9.7 inches Storage type Internal storage (16 GB, Flash) Maximum battery life Up to 10 hours Dimensions 9.4 x 6.6 x 0.24 in Weight 0.96 lb Announced 2014-10-16 see all specs → Air Jordan XX9 "Blackout" - Nikestore Release Info. The Air Jordan 29 “Blackout” is headed to retailers tomorrow, December 6th, 2014. 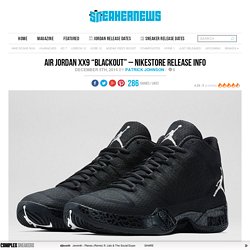 Fresh off the Black Friday release of the rather vibrant Air Jordan 29 “Infrared”, these knit Jordans return with the exact opposite thought process by giving the shoe an ominous black look that near camouflages the piping and elephant print throughout. The branding does stand out on this pair though, as the Jumpman logos hit in an opposing white. Stay tuned for more Jordan Release Dates right here on Sneaker News and let us know if you plan on grabbing this murdered out Air Jordan XX9 by taking your opinions to our comments section. The Ars indie showcase: 30 games to watch in 2014. This year’s PAX East and Game Developers Conference left a lot of games in their wakes. 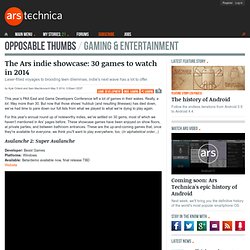 Really, a lot. Way more than 30. But now that those shows’ hubbub (and resulting illnesses) has died down, we’ve had time to pare down our full lists from what we played to what we're dying to play again. Cards Against Originality, an app for Cards Against Humanity. The 20 best (and three most disappointing) video games of 2013. Internet Archive releases hundreds of classic game console ROMs. Tired of that shiny new game console you opened up on Christmas morning already? 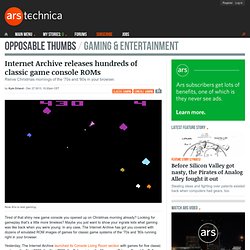 Looking for gameplay that's a little more timeless? Maybe you just want to show your ingrate kids what gaming was like back when you were young. In any case, The Internet Archive has got you covered with dozens of emulated ROM images of games for classic game systems of the '70s and '80s running right in your browser. Yesterday, The Internet Archive launched its Console Living Room section with games for five classic systems: the Atari 2600, the Atari 7800, the Colecovision, the Magnavox Odyssey2, and the Bally Astrocade.

You can play dozens of games for each system right on the site through the Javascript-based JMESS emulator, which runs decently (but not great) in most modern browsers The new section is an extension of the Internet Archive's existing Software Collection, which launched a few months ago with a limited selection of downloadable and browser-emulated games. 2015 Independent Games Festival Awards Finalists Announced. 'Cards Against Humanity' brings the raunch to the web in unofficial app (update)