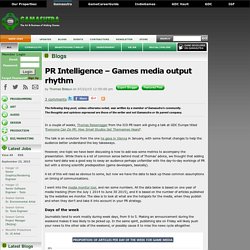 The thoughts and opinions expressed are those of the writer and not Gamasutra or its parent company. In a couple of weeks, Thomas Reisenegger from the ICO PR team will giving a talk at GDC Europe titled 'Everyone Can Do PR: How Small Studios Get Themselves Heard'. The talk is an evolution from the one he gave in Vienna in January, with some format changes to help the audience better understand the key takeaways. Fortunately, It's Just a Game. APRIL 01, 1995 by CANDACE ALLEN Filed Under : Monopoly Ms. 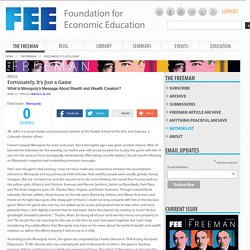 Allen is a social studies and economics teacher at the Pueblo School of the Arts and Sciences, a Colorado charter school. I haven’t played Monopoly for years and years. But a few nights ago I was given another chance. Had I won the game that evening, I may not have made any connections between the assumptions inherent in Monopoly and my previously held attitudes that wealthy people were usually greedy money mongers. According to the Monopoly insert, the game was originated by Charles Darrow in 1934 during the Great Depression. Preorders declining industry-wide - Hirshberg. Bungie's upcoming shooter Destiny is on track to be the most preordered new intellectual property in gaming history, but Activision Publishing president and CEO Eric Hirshberg isn't putting as much stock in that as one might expect. 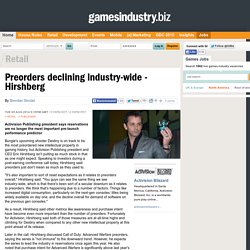 Speaking to investors during a post-earning conference call today, Hirshberg said preorders just don't mean as much as they used to. "It's also important to sort of reset expectations as it relates to preorders overall," Hirshberg said. "You guys can see the same thing we see industry-wide, which is that there's been sort of a secular downturn as it relates to preorders. We think that's happening due to a number of factors: Things like increased digital consumption, particularly on the next-gen consoles; titles being widely available on day one; and the decline overall for demand of software on the previous gen consoles.

" As a result, Hirshberg said other metrics like awareness and purchase intent have become even more important than the number of preorders. Gamification and Interface Design: How Game Elements Affect User Experience. It’s not easy for a video game to be successful. 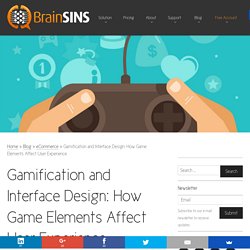 To create an engaging experience that not only persuades users to spend upwards of $60 per game, but also entices them to spend hours of their time is a truly impressive undertaking. To get it right, a myriad of elements must be fine-tuned and adjusted so that the sum of the parts creates such an entertaining experience that thousands, sometimes millions, of users purchase and play the game. But despite this level of complexity, successful video games are not rare. In fact the industry rivals that of music and movies in terms of revenue, and every year more people become gamers. So what’s the secret? While gamification is far from full fledged game design, it’s undeniable that using game elements can have a positive effect on user experience.

What are the most ingenious ways to monetize apps? Why free-to-play should be like Disneyland. Laralyn McWilliams, CCO at The Workshop, has explained why free-to-play developers should look to Disneyland's ticketing system for inspiration. 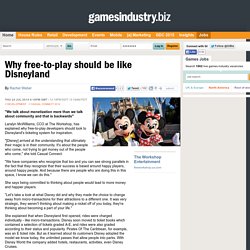 "[Disney] arrived at the understanding that ultimately their magic is in their community. It's about the people who come, not trying to get money out of the people who come," she told Casual Connect. "We have companies who recognize that too and you can see strong parallels in the fact that they recognize that their success is based around happy players, around happy people.

And because there are people who are doing this in this space, I know we can do this. " Ethical Free-to-Play Game Design (And Why it Matters) Long-time game industry veteran and former Playdom senior game designer Greg Costikyan offers a practical look at how ethics in free-to-play design affects a game's success. 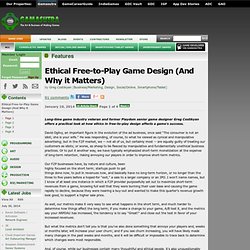 David Ogilvy, an important figure in the evolution of the ad business, once said "The consumer is not an idiot; she is your wife. " Why The Hell Do We Keep Playing Difficult Video Games? It is a little strange though. 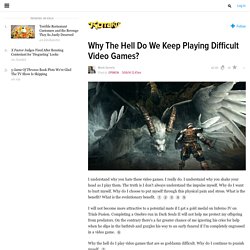 Dark Souls in particular causes an insane amount of negative emotions (frustration, anger, impotence, fear, rage, disappointment, as Mark listed them), and causes them frequently. How We Made The Last of Us' Interface Work So Well. I'm super-glad there's an article out there like this, especially hot on the heels of the Deux Ex menu showcase. 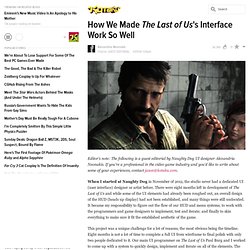 I've gone through far too many programs, operating systems, and games that have had hilariously bad UI/UX design (I'M LOOKING AT YOU, EVERY SINGLE BETHESDA GAME), and things like this definitely help in getting people to appreciate when it's done well. I'm actually thinking of getting a career change to doing UX/UI design, and video games have been my primary interest. What does it take to get a job in UX, perhaps even specifically gaming UX, and what kind of experience do you recommend? And I mean everything from the obvious, like college majors or certification courses, to the less obvious, like everyday hobbies that involve heavy use of associated skills. Should add that I have absolutely zero computer science/programming background.