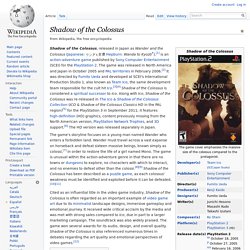 ,[1] is an action-adventure game published by Sony Computer Entertainment (SCEI) for the PlayStation 2. The game was released in North America and Japan in October 2005 and PAL territories in February 2006.[2] It was directed by Fumito Ueda and developed at SCEI's International Production Studio 1, also known as Team Ico; the same development team responsible for the cult hit Ico.[3][4] Shadow of the Colossus is considered a spiritual successor to Ico. Caring For Lucky Bamboo – Dracaena Sanderiana. Dracaena sanderiana has many common names associated with it: Lucky Bamboo, Ribbon Dracaena, Ribbon Plant, Belgian Evergreen, Chinese Water Bamboo, Friendship Bamboo, Water Bamboo. 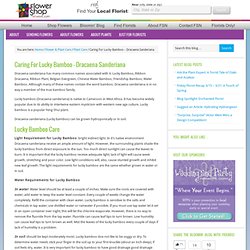 Although many of these names contain the word bamboo, Dracaena sanderiana is in no way a member of the true bamboo family. Lucky bamboo (Dracaena sanderiana) is native to Cameroon in West Africa. It has become widely popular due to its ability to intertwine eastern mysticism with western new age culture.

Lucky bamboo is a popular Feng Shui plant. Dracaena sanderiana (Lucky bamboo) can be grown hydroponically or in soil. Destiny for PlayStation 4. Parcourir les jeux Origin. Gifts.com – shop.gifts.com. Metroid. As of 2011, the Metroid series consists of eleven games, with releases on every Nintendo home and portable console except the Game & Watch, Nintendo 64, Game Boy Color, 3DS, and Wii U (although the latter two allow users to download older Metroid titles). 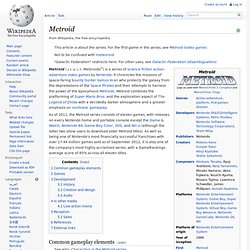 As well as being one of Nintendo's most financially successful franchises with over 17.44 million games sold as of September 2012, it is also one of the company's most highly acclaimed series, with a GameRankings average score of 85% across all eleven titles. Common gameplay elements[edit] Games[edit] Parcourir les jeux Origin. Parcourir les jeux Origin. 10 Games That Lied Right To Our Faces. Sanctum 2 Review for PC. It’s good when developers listen. 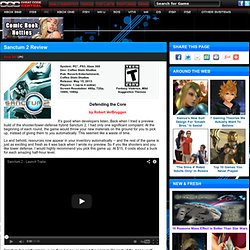 Back when I tried a preview build of the shooter/tower-defense hybrid Sanctum 2, I had only one significant complaint: At the beginning of each round, the game would throw your new materials on the ground for you to pick up, instead of giving them to you automatically. This seemed like a waste of time. Lo and behold, resources now appear in your inventory automatically -- and the rest of the game is just as exciting and fresh as it was back when I wrote my preview. So if you like shooters and you like tower defense, I would highly recommend you pick this game up. At $15, it costs about a buck for each amazing half-hour level. Sanctum 2 is pretty simple, even if you've never played the original. The idea, obviously, is to force your enemies through an elaborate maze, giving you and your turrets time to kill everything. 10 Games That Will Kick Your Ass - Cheat Code Central.

10 Most Disturbing Video Game Performances Ever. The Darkness (video game) A Darkling threatens a passerby while the Creeping Dark tendrils watch. 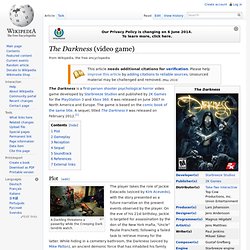 The player takes the role of Jackie Estacado (voiced by Kirk Acevedo), with the story presented as a future-narrative on the present events observed by the player. On the eve of his 21st birthday, Jackie is targeted for assassination by the don of the New York mafia, "Uncle" Paulie Franchetti, following a failed task to retrieve money for the latter. While hiding in a cemetery bathroom, the Darkness (voiced by Mike Patton), an ancient demonic force that has inhabited his family for several generations, awakens within Jackie and slaughters the remaining mobsters, with the benefit of Jackie becoming the possessor of seemingly unholy demonic abilities that feed off the dark.

Using these powers, Jackie is able to survive further assassination attempts and track down Paulie, but not before Paulie and the corrupt police chief Eddie Shrote kidnap Jackie's girlfriend Jenny Romano (voiced by Lauren Ambrose). 10 Creepiest Moments in Video Games. Video games are built to toy with our emotions which is why a list of the 10 Creepiest Moments in Video Games was such a fun list to research. 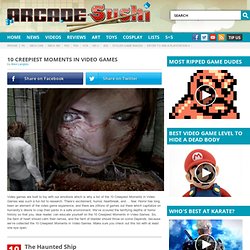 There’s excitement, humor, heartbreak, and … fear. Horror has long been an element of the video game experience, and there are zillions of games out there which capitalize on humanity’s desire to crap their pants in a safe environment. Devil May Cry 4 - What Are the Most Difficult Video Games of This Generation? Devil May Cry 4 4 of 11 In Devil May Cry 4 you control a new character named 'Nero.' He carries a sword like Dante but his demon powers are contained in his arm which can be used to grab enemies from a distance. 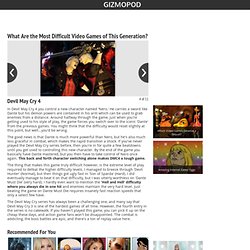 Around halfway through the game, just when you're getting used to his style of play, the game forces you switch over to the iconic 'Dante' from the previous games. Final Fantasy XIV: A Realm Reborn [Download]: Video Games. No. 17: Jenny in The Darkness. 10 Games That Lied Right To Our Faces. Top 10 Best Mystery Games of All Time. 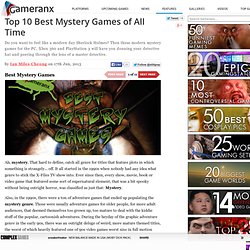 That hard to define, catch all genre for titles that feature plots in which something is strangely... off. It all started in the 1990s when nobody had any idea what genre to stick the X-Files TV show into.