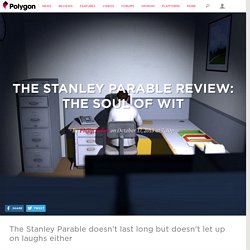 I've actually spent more time than that — close to three hours — but each individual playthrough lasts no longer than 30 minutes. In its pursuit of that rare title of comedy game, The Stanley Parable joins Shakespeare's Polonius — the would-be jokester from Hamlet — in prizing brevity above all else. The short running time is a positive force; in fact, in this case it's essential. 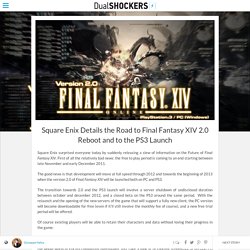 First of all the relatively bad news: the free to play period is coming to an end starting between late November and early December 2011. The good news is that development will move at full speed through 2012 and towards the beginning of 2013 when the version 2.0 of Final Fantasy XIV will be launched both on PC and PS3. Why Final Fantasy 14 is secretly the best game in the series. Before I get started, and before you shoot me for not saying Final Fantasy 7 is the best, there are a few things you need to know about me. 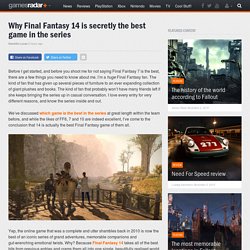 I’m a huge Final Fantasy fan. The kind of fan that has given up several pieces of furniture to an ever expanding collection of giant plushes and books. The kind of fan that probably won’t have many friends left if she keeps bringing the series up in casual conversation. I love every entry for very different reasons, and know the series inside and out. Girls Make Games Presents: The Hole Story! by LearnDistrict Inc. Featured on IGN | Polygon | Gamasutra | Joystiq | Gamespot The Hole Story gameplay that you see here was created as a demo during their time at Girls Make Games. 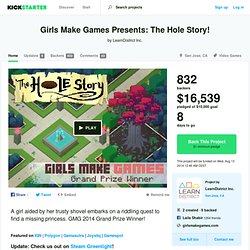 This Kickstarter will let the girls continue to work on The Hole Story, hire professional artists, musicians, and programmers, and publish a very pretty and complete version of their vision. The Hole Story will be funded through this Kickstarter campaign, developed at LearnDistrict and published + featured on the Google Play store! Note: After accounting for game development, publishing costs, and Kickstarter fullfillment, profit from game sales will go directly to the team. 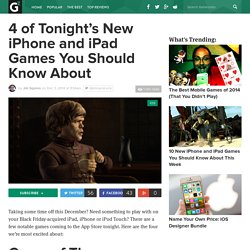 Need something to play with on your Black Friday-acquired iPad, iPhone or iPod Touch? There are a few notable games coming to the App Store tonight. FEATURE: "Fantasy Life" Review. By Sarah Vaughn I have no idea why I heard almost nothing about Fantasy Life before it came out. 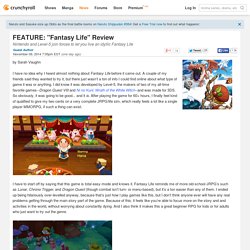 A couple of my friends said they wanted to try it, but there just wasn’t a ton of info I could find online about what type of game it was or anything. I did know it was developed by Level-5, the makers of two of my all-time favorite games--Dragon Quest VIII and Ni no Kuni: Wrath of the White Witch--and was made for 3DS. So obviously, it was going to be good... and it is. After playing the game for 60+ hours, I finally feel kind of qualified to give my two cents on a very complete JRPG/life sim, which really feels a lot like a single player MMORPG, if such a thing can exist. Watch?v=qxM9pMEnJQ0&feature=youtu. Future Crisis: A Brief History of Graphics, Part Five. Voodoo Bloom: A Brief History of Graphics, Part Four. PlayStation 20th Anniversary Video. 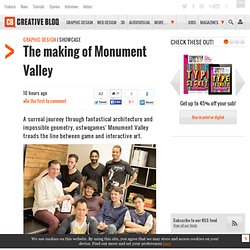 Inspired by the art of MC Escher, Japanese prints and minimalist 3D design, each level in the game is a hand-crafted combination of puzzle, graphic design and architecture. Players guide princess Ida through mysterious monuments, uncovering hidden paths, taking advantage of optical illusions and outsmarting the enigmatic Crow People.

Here Ken Wong talks us through the game's creation. Every project I've worked on has been different, but I always try to make my work, or the work of my team, innovative and full of character. The idea for Monument Valley came out of a brainstorming session a year ago. Work in progress Because Monument Valley doesn't fit easily into an existing genre, we couldn't rely on existing tropes and patterns. Monument Valley was created using the Unity3D engine. Ori and the Blind Forest looks great, but plays even better. One look at the trailer for Microsoft's upcoming Metroidvania adventure Ori and the Blind Forest and it's easy to be blown away by its Studio Ghibli inspired visuals. 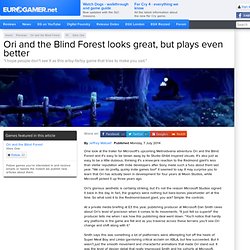 It's also just as easy to be a little dubious, thinking it's a knee-jerk reaction to the Redmond giant's less than stellar reputation with indie developers after Sony made such a fuss about them last year. "We can do pretty, quirky indie games too! " it seemed to say. Benefits of Gaming: What Research Shows. Multiplayerit : Nel caso volesse cambiare ... Kickstarter Corner: Young Women Dig into The Hole Story. The Man Who Turned Paper into Pixels: How Mathematician and Black Jack Wizard Claude Shannon Ignited the Information Age. 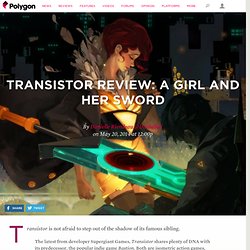 The latest from developer Supergiant Games, Transistor shares plenty of DNA with its predecessor, the popular indie game Bastion. Both are isometric action games, set in colorful, stylized worlds. Both emphasize combat. But Transistor's world and story feel unique. Writing Subversive Games: Pitfalls and Potentials. One rainy evening somewhere at the early end of 1997, I found myself hepped up on adrenaline while zigzagging through a dungeon. 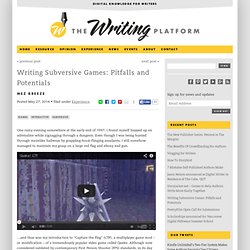 Even though I was being hunted through mazelike hallways by grappling-hook-flinging assailants, I still somehow managed to maintain my grasp on a large red flag and ebony nail gun. …and thus was my introduction to “Capture the Flag” (CTF), a multiplayer game mod – or modification – of a tremendously popular video game called Quake. Although now considered outdated by contemporary First Person Shooter (FPS) standards, in its day Quake was considered highly influential, especially in relation to the concept of emergent gameplay. Emergent gameplay occurs where players employ various workarounds – which are not necessarily scripted by the game’s creators – in order to further game progression. What video games can teach us about global economies. A Board Game That Has You Guess Ridiculous Internet Search Predictions. The Last Tinker: City of Colors - World Overview. Jonathan Blow: Game design: the medium is the message. The Engagement Circle: How Game Designers Create Engaging Experiences (I)

The 12 Key Stages of Engagement in Games: Exploring how games make us lose track of time (Part 1) Did you ever wonder how game designers create engaging experiences? Why do online games. Game Boy. Pixel Press review: this is what it’s like to draw a video game. 121inShare Jump To Close When I was a kid, video games didn't end the moment I turned off the NES.

Bravely Default - Recensione - 3DS - 126058. Rubrica - Punto Doc - 26109 - Multiplayer.it. Hand-drawn video game maps are physical memories, so let's see yours. I recently stumbled onto Jack Kerouac's hand-drawn map from the hitchhiking trip that ultimately became On the Road. It's simple, just a few lines and some notes. But it's not more than that; it's evidence of a journey, and a journey that has since become culturally relevant. The same can be said about any hand-drawn maps from a game, and there are sites that show these and collect them. The art of drawing maps by hand is something many of us did growing up, but as an art form it has been killed off by strategy guides and online sites that provide these maps for us, in many cases before the game is even released. Pong Was Never Intended For Public Release. Gizmodo : Pong was never supposed to ...

Osmo. Play Beyond the Screen. POKEMON RED AND BLUE W/ Smosh (Honest Game Trailers) Hands on: Project Morpheus review. Sony unveiled Project Morpheus at GDC 2014 introducing us to the first real virtual reality competitor to the Oculus Rift. GDC 2015 saw the latest announcement revealing the newest evolution of Morpheus. Even better, barring any complications, we'll be able to own one in the first half of 2016. Complete with a larger 5.7-inch OLED screen with 1920 x RGB x 1080 resolution. The field of view has been stretched to 100 degrees, and Project Morpheus now supports an impressive 120fps output (a new SDK will let 60fps images output at 120fps, too). It now also supports 3D audio and has a new feature called social screen, which lets users take the same gameplay they see inside their Morpheus and put it on a TV so other people can play along.

Theverge. Shot on location at WeWork. Also available on YouTube. The Winner PlayStation Vita The PlayStation Vita is the least commercially successful option available in the portable gaming market. Generally ignored even by video game devotees, it’s sold somewhere over 4 million units since its release in Japan in late 2011. PlayStation's legacy is a sense of style. Oculus Rift: Step Into the Game by Oculus. VR Films Are Going to Be All Over Sundance in 2015. A still from the Kaiju Fury! Virtual reality experience coming to the Sundance Film Festival. Valentina Bertani sur Twitter : "Star Ocean: First Departure.

Twine, the Video-Game Technology for All. Perhaps the most surprising thing about “GamerGate,” the culture war that continues to rage within the world of video games, is the game that touched it off. Depression Quest, created by the developers Zoe Quinn, Patrick Lindsey and Isaac Schankler, isn’t what most people think of as a video game at all. For starters, it isn’t very fun. Its real value is as an educational tool, or an exercise in empathy. Aside from occasional fuzzy Polaroid pictures that appear at the top of the screen, Depression Quest is a purely text-based game that proceeds from screen to screen through simple hyperlinks, inviting players to step into the shoes of a person suffering from clinical depression.