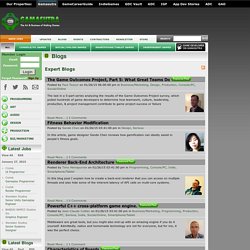 In this blog post I explain how to create a back-end renderer that you can access on multiple threads and also hide some of the inherent latency of API calls on multi-core systems. Middleware are great tools, but you might also end-up with an amazing engine if you do it yourself. Admittedly, native and homemade technology are not for everyone, but for me, it was the perfect choice. Kotaku - The Gamer's Guide. Indies: Market early and often or "sink into obscurity" There are a few different ways to look at the explosive growth in the independent gaming scene. 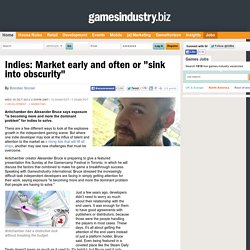 But where one indie developer may look at the influx of talent and attention to the market as a rising tide that will lift all ships, another may see new challenges that must be overcome. Antichamber creator Alexander Bruce is preparing to give a featured presentation this Sunday at the Gamercamp Festival in Toronto, in which he will discuss the factors that combined to make his game a breakthrough success. Speaking with GamesIndustry International, Bruce stressed the increasingly difficult task independent developers are facing in simply getting attention for their work, saying exposure "is becoming more and more the dominant problem that people are having to solve. " Antichamber had a distinctive look without breaking the budget.

Just a few years ago, developers didn't need to worry so much about their relationship with the end users. Latest entries - Future Proof Games. I've spent the last six weeks with my left arm in an immobilizer sling. 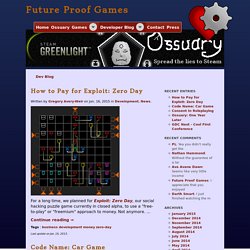 Six weeks of southern United States summer, of being a day-and-night software developer, of being a gamer, all rocking a sling that straps my left arm to a pillow that is in turn strapped to my torso and neck. After the first 11 days, I've had some use of my left hand for things like typing, but I have limited wrist mobility and can't reach for things or hold/lift more than about two pounds. Latest entries - Future Proof Games. 8bitrocket.com. The Bottom Feeder. The Bottom Feeder. Voidscapes are the final frontier of videogames. "I like that in 2D jRPGs house interiors are surrounded by this immense black void. 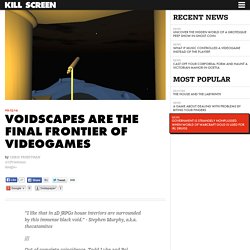 " - Stephen Murphy, a.k.a. thecatamites Out of complete coincidence, Todd Luke and Pol Clarrisou—two game creators—used the term "voidscape" to describe a small experimental videogame of theirs this past week. Being a word of two syllables that seem to contradict each other, the concept begs an explanation. Voids have always existed around videogames. It's the negative space that you can sometimes accidentally fall into and watch as the polygons you once walked on disappear. A void is that endless, omnipresent outside part of videogames where nothing happens and nothing exists. Recognize your own minuteness inside this virtual universe.

Placing the suffix -scape onto the end of a word, as in landscape or dreamscape, is to describe it as pictorial; a view to be observed or explored (perhaps both), usually one of beauty. What voidscapes express is the idea of videogames as diorama. Game Development with Unity 2D - part 1: The Battle of the Teutoburg Forest - Design a Game. In this episode of our voyage in Unity 2D development, we create the first version of our Battle of the Teutoburg Forest. 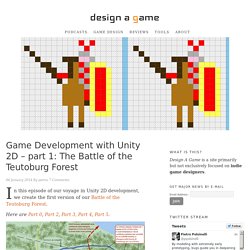 Here are Part 0, Part 2, Part 3, Part 4, Part 5. In this first video we see the basics of Unity 2D sprites and animations (as provided in Unity 4.3 and following), and a base class structure for a strategic game. This is not a tutorial, as the latter assumes an expert Unity developer talking: I consider this just a shared experiment, and it would be great to get feedback (on Twitter I’m @ppolsinelli). Here is the video (but its probably better to see it in HD and fullscreen here): Previous episode (only notes, no video) here. Download & sources Complete project download: Class (“scripts”) sources on GitHub: Tools used Get Unity, Pyxel Edit. Create an Isometric Pixel Art Apartment Building in Adobe Photoshop. If you've been following this series of tutorials, you may already have a neighborhood block with (slightly) different houses and cars. 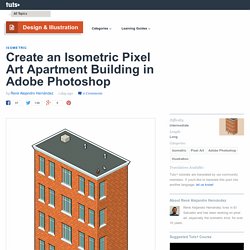 Let's continue to grow our city, but this time vertically; we'll be making a building multiple stories high. As usual, we'll use our character as a sort of yardstick to find a reasonable height for each floor. Dimensions don't need to be completely realistic; it's better for buildings to be slightly smaller so that characters still get to stand out on the canvas.

Make Games. Note: This tutorial was created in 2007 for my personal website. 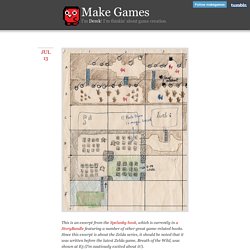 Some small tweaks have been made since then, but nothing too significant. In this 10-step tutorial, I’ll teach you how to create a “sprite”, which is a stand-alone two-dimensional character or object. The term comes from video games, of course.