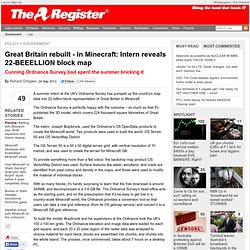 The Ordnance Survey is perfectly happy with the outcome – so much so that it's published the 3D model, which covers 224 thousand square kilometres of Great Britain. The intern, Joseph Braybrook, used the Ordnance's OS OpenData products to create the Minecraft world. Two products were used to build the world: OS Terrain 50 and OS VectorMap District. The OS Terrain 50 is a 50 x 50 digital terrain grid, with vertical resolution of 10 metres, and was used to create the terrain for Minecraft GB.

To provide something more than a flat colour, the backdrop map product OS VectorMap District was used. 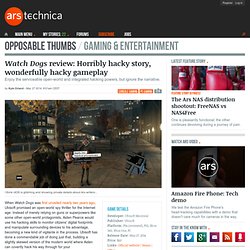 Assassin’s Creed IV review: Enormous, but ultimately empty. For the past six years, the Assassin's Creed video game series has hosted murderous sprees across the history of Western civilization, all with a weird meta-connection to modern-day times. 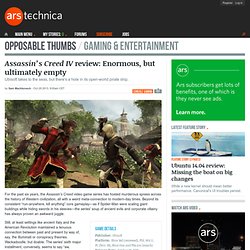 Beyond its consistent “run-anywhere, kill anything” core gameplay—as if Spider-Man were scaling giant buildings while hiding swords in his sleeves—the series' soup of ancient evils and corporate villainy has always proven an awkward juggle. Still, at least settings like ancient Italy and the American Revolution maintained a tenuous connection between past and present by way of, say, the Illuminati or conspiracy theories. Wackadoodle, but doable. The series' sixth major installment, conversely, seems to say “aw, whatever” to such strides. "People love pirates, right? Assassin's Creed IV: Black Flag doesn't necessarily play as half-assed as that might sound. Yet this stupidly huge game—yes, even bigger than the giant Assassin's Creed III—somehow feels claustrophobic.

GTA V. Civilization: Beyond Earth—Next time, reach for the stars. A single blue orb floating among billions, part of a galaxy that’s among hundreds of billions, houses the sum total of human achievement. 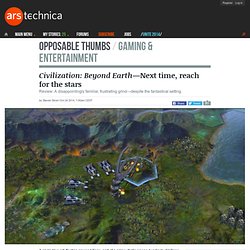 The Sid Meier's Civilization series is one of those achievements, taking the total history of that great, big ball we all live on and condensing it into perhaps the best, and certainly the most popular, 4X strategy game ever made. Civilization has always held the sanitized, slightly goofy ideal common to all projects bearing Meier's moniker. Maybe Civilization: Beyond Earth's developers felt infinitesimal when considering the vastness of space, or maybe they were simply struck with a distrust of the future common to science fiction. Either way, the latest game in the franchise that all but defines turn-based strategy is a bit less sanitized and a bit more sinister than its predecessors. The similarities make Beyond Earth feel more like a sci-fi themed Civ V expansion than a bold new direction for the series. A narrow universe. I’m not crazy (but I did buy a $450 HOTAS Warthog joystick)

I think I have a problem. 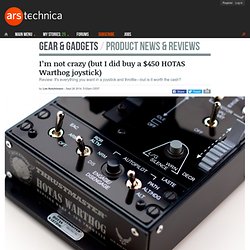 I am not attracted to that many gadgets, but I lack anything even remotely resembling impulse control when it comes to those I do want. We don’t keep review hardware at Ars, so while I can often scratch an itch by requesting that companies send me the toys I lust after, I end up simply buying the things I want most—to hell with budget and consequences. It was in mid-May when I stumbled across this fan-made video of the complex and sprawling spaceship simulator Elite: Dangerous showing off the new features added to the crowdfunded game’s alpha build. Ninety seconds into the ten minute video, I scraped my jaw off the floor and bought into Elite’s premium beta (you can read my thoughts on the game in this long-form review with video). Immediately I knew my current control set-up just wouldn’t cut the mustard in a game as complex as Elite: Dangerous. “It felt like robbery”: Tomb Raider and the fall of Core Design.

The house that built Tomb Raider sat on top of the world in 1998. 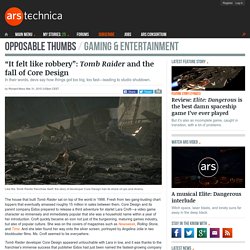 Fresh from two gang-busting chart toppers that eventually amassed roughly 15 million in sales between them, Core Design and its parent company Eidos prepared to release a third adventure for starlet Lara Croft—a video game character so immensely and immediately popular that she was a household name within a year of her introduction. Croft quickly became an icon not just of the burgeoning, maturing games industry, but also of popular culture. Growing up gaming: The five space sims that defined my youth. When reviewing Elite: Dangerous, I went with the headline "the best damn spaceship game I’ve ever played. 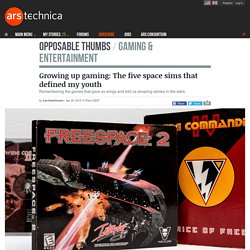 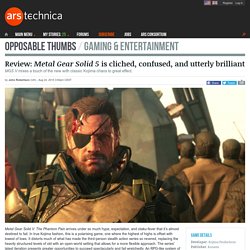 In true Kojima fashion, this is a polarising game, one where the highest of highs is offset with lowest of lows. It distorts much of what has made the third-person stealth action series so revered, replacing the heavily structured levels of old with an open-world setting that allows for a more flexible approach. The series' latest iteration presents greater opportunities to succeed spectacularly and fail wretchedly.

Beginners Guide to TinyFugue. OK, I'm assuming that you've installed a version of tf in your UNIX account. 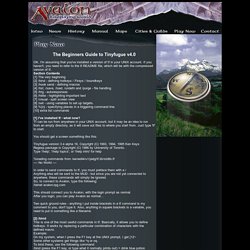 If you haven't, you need to refer to the tf.README file, which will be with the compressed version of tf. Section Contents [1] The very beginning [2] /bind - defining hotkeys / Fkeys / boundkeys [3] /hook send - defining macros [4] /list, /save, /load, /undefn and /purge - file handling [5] /trig - autoresponses [6] /hilite - highlighting important text [7] /visual - split screen view [8] /set - using variables to set up targets. [9] %{n} - specifying places in a triggering command line. [10] extra list commands [1] I've installed tf - what now? Tf can be run from anywhere in your UNIX account, but it may be an idea to run from an empty directory, as it will save out files to where you start from. Rogue System is a button-studded, checklist-filled space survival sim. Last year I was lucky enough to get to sit down in an actual Navy F/A-18F Hornet simulator and log about a full hour of flight time. 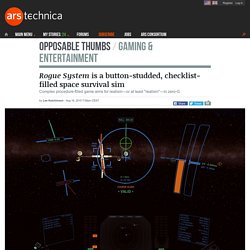 I was saved from most of the raw complexity of flying the twin-engine supersonic fighter because Commander Matt "Sparky" Smith spent the whole flight crouched outside of the cockpit, handling most of the navigation and communication and management tasks, leaving me free to stick-n-throttle the aircraft just like a video game. Without all that stuff, flying was pretty easy. Headshot: A visual history of first-person shooters. Many of us are familiar with the first-person shooter (FPS) creation myth—that it materialized fully formed in the minds of id Software founders John Carmack and John Romero shortly before they developed Wolfenstein 3D. Afterward, it was pushed forward only by id until Valve's Half-Life came along. But the reality behind FPS evolution is messier.

Innovations came from multiple sources and often took years to catch on. Even Wolfenstein 3D had numerous predecessors within and without id.