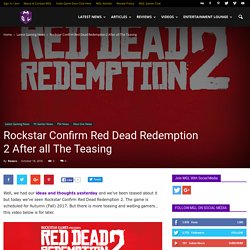 The game is scheduled for Autumn (Fall) 2017. But there is more teasing and waiting gamers… this video below is for later. The trailer above launches at 4PM Today so pop back and what it then for more details. What’s interesting is the direct sequel which was not expected. The reveal should be very interesting at 4 thats for sure. There is also a press release below with a nice poster image to check out below.

Untitled. Watch Some Stealth Action in This Ghost Recon Wildlands Gameplay. Don’t know about you gamers, but there is nothing better than a good bit of stealth action, getting kills and going undetected! 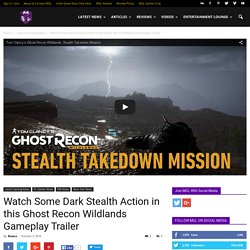 That being said it looks like there is some serious stealth to be had in this new Ghost Recon Wildlands gameplay. XCOM 2 Launches on PS4 and Xbox One - Launch Trailer & Details. Ready to get some sci-fi strategy action going gamers? 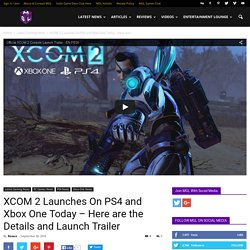 Well you should be if you are reading this because XCOM 2 Launches on PS4 and Xbox One today in Europe. 2K and Firaxis Games are bringing this game to the consoles and we expect big things from one of the best PC games of the year. The game takes place 20 years after the events of the first game and it’s all about making the last stand for the human race!

No pressure then guys. Check out a few details on the game below along with some more gameplay to go with the trailer above. Twenty years have passed since world leaders offered an unconditional surrender to alien forces and XCOM, the planet’s last line of defense, was left decimated and scattered. Only those who live at the edges of the world have a margin of freedom. Take command of the Avenger, an alien supply craft converted to XCOM’s mobile headquarters. Keep up to date with My Games Lounge by. Gears of War 4 Prologue Gameplay is All Action And All Awesome. Get ready gamers, we are not far from taking on the hoards of Locusts once again! 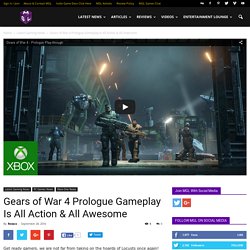 Today we have had an update with the Gears of War 4 Prologue gameplay going live. All 20 brutal minutes of it! The game looks all action with cover based shooting in all out chaos starting right away. Soon you are mounting turrets and sprinting between explosions in this action pact start. Shadow Warrior 2 Soundtrack Has Got The Touch of Legend Stan Bush! Oh my talk about some monday motivation gamers. 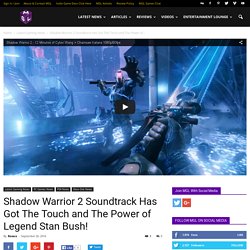 Get this on in your earphones and be excited to play the next Shadow Warrior game. Why you say? Because the Shadow Warrior 2 Soundtrack features none other than legend Stan Bush from the very best Transformers Movie from the 80s. Yooka-Laylee Characters Trailer Shows Just How Fun This Game Will Be. Some indie game news this fine sunday gamers and its the awesome Team 17 & Playtonic games that have released a new Yooka-Laylee Characters Trailer. 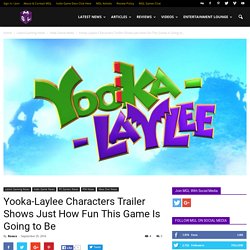 We’ve just been to EGX and played this amazing game first hand with David putting his thoughts together for next week. Right now you can check out the video above and see Yooka and Laylee and how they work together. Capital B and his slightly Gru looking face. One of the characters that had us laughing at EGX was a snake called “Trowser” as in the very British expression “Trouser Snake” (I’ll let google explain that one for you!). EA Play Reveals New Mass Effect Andromeda. The EA Play Event has been revealing some new information tonight gamers and we are right on top of things here on MGL. 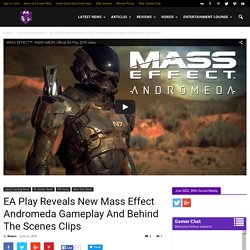 Check out the video above as EA Play Reveals new Mass Effect Andromeda Gameplay mixed into some behind the scenes footage. While confirming the game is about a whole new galaxy and that the main idea is “how far can we go?” There wasn’t too much to go on yet other than that gameplay showed a few hints as to your crew and the new universe. We are waiting for full press details so bookmark this article and you will get the updated information below on Battlefield 1 as soon as we have it.

A whole new galaxy awaits for you to explore. Mass Effect: Andromeda – Coming early 2017 to PC, PlayStation 4, and Xbox One Full information to follow… EA Play Reveals New Titanfall Campaign Gameplay & Release Date. Deus Ex Breach Mode Revealed With Deus Ex Go for Mobile Devices. More gaming news today gamers, and there has been a few today, this time we see some additional content as Deus Ex Breach mode is announced for the main game and the next in the mobile series of games from Square Enix comes along in Deus Ex Go. 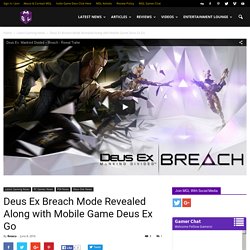 The main title, Deus Ex is coming August 23rd for PlayStation 4, Xbox One, and Windows PC and Breach Mode looks a cool addition as you can see from the gameplay above. While the focus of the game is it’s main plot mode there is a lot on offer in this Breach gameplay that might just get a few gamers addicted to developing this avatar character and gaining the data rewards that come with it.

In addition to the excellent Go games such as Hitman Go, we also get a small clip of Deus Ex Go that adds more addictive turn-based fun to your mobile: Agents of Mayhem First Trailer Shows off Some Explosive Action. You only get one chance to make a first impression and the Saints Row Developers have really gone for it with their new IP in this Agents Of Mayhem first trailer that shows off some very cool action, a bit of the story and some of that humor they are famous for. 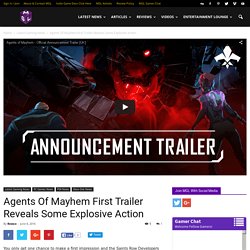 The game is coming to PS4 and Xbox One along with PC in 2017 and will be an open world action game. Watch Dogs 2 First Trailer, Screens, Information & Editions. Oh are we ready to go hacking? 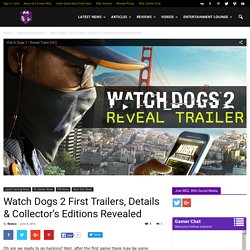 Well, after the first game there may be some indecision on the part of some gamers here but for those ready for more action we can now take a look at Watch Dogs 2 first trailers along with some detail about the game, screenshots and the collector’s editions. The game will arrive on PS4, Xbox One and PC on November 15th this year. And all look like they have take a step forward from the first title.

The main change is the lead character as you will be playing as Marcus Holloway, a hacker who is brought in by rogue group DedSec to bring down the corruption! Hopefully he’s a bit more personality that Aiden Pearce! There are also some cool screens and further information below. WB Reveal Injustice 2 for PS4 and Xbox One for 2017. A new game is coming for us DC fans that like to pit our favourite characters against each other as we see WB reveal Injustice 2 For PS4 and Xbox One with some details on the new gameplay and the above video that does look pretty awesome.

The game will be coming to the consoles in 2017 and will apparently feature the biggest DC roster ever. But the big headline is leveling-up your heroes/villains as you play, customising them with added gear (maybe a loot system?) So you can fully select how they fight and what qualities they have. World of Final Fantasy Gameplay & Release Date Revealed. If you are a lover of this classic series, this game is going to put a serious smile on your face as this World of Final Fantasy gameplay reveals all the famous characters working together to combat a common enemy. The game is coming to PS4, PS Vita on October 28 and this is going to be one to pick up for fans. To see Tidus and Yuna together again is a pleasure in itself for me but then we have Cloud and the FFVII team not to mention Squall and Vivi playing a part along with modern heroes like Snow and Lightning. After the confirmation of Final Fantasy XII Remaster Yesterday, I’m only one more piece of FF news (specifically about the Final Fantasy VII Remake) away from a geek-gasm.

Fortunately, I certain we’ll be getting a lot more at E3 Very Soon. Check out some additional details on World of Final Fantasy below. In WORLD OF FINAL FANTASY, players will lead a pair of twins, Reynn and Lann, on their journey through the world of Grymoire on a search to rediscover their lost memories. Horizon Zero Dawn Delayed Until February 2017 From Latest Trailer. The bittersweet feeling is real gamers! As I clicked giddily to see some action from this highly anticipated RPG from Guerrilla Games I sadly found that Horizon Zero Dawn delayed until next year. It’s a firm release date of February 28th however and the gameplay is looking as good as ever. The game was scheduled to be a release for 2016 but it looks like they have pushed that back into the early part of next year.

A few details below, more if we get them later. Launching February 28, 2017, Horizon Zero Dawn is an exhilarating new open-world action role playing game exclusively for the PlayStation 4 System, developed by the award winning Guerrilla Games, creators of PlayStation’s venerated Killzone franchise. Yooka-Laylee E3 Trailer & Details of This Indie 3D Platformer. We have some indie game news on E3 for you gamers with this Yooka-Laylee E3 Trailer revealing some cool gameplay for this 3D platformer created by Playtonic and now coming to PC and consoles in 2017 in the first quarter. The game was going to come late on this year with an October window but they have decided to push it back for a level of polish the game deservers.

Always the correct reason to delay a game in our view. More details are below and look for these guys if you are attending E3. Final Fantasy XII The Zodiac Age Trailer. We have a teaser trailer gamers, and it’s a great one for us Final Fantasy fans with a look into Square Enix’s plans to release another remaster after releasing the above Final Fantasy XII The Zodiac Age Trailer. As Final Fantasy games go, 12 is not usually the first on people’s minds in terms of the series but it was one of the most gameplay changing episodes of the long running JRPG series ever. It was one of the most fun combinations of the classic RPG tactics and modern combat techniques so we are looking forward to seeing how this runs on PS4. Sherlock Holmes The Devil's Daughter Story Trailer & Details. Are you ready to take on some detective work gamers?