The bystander effect occurs when the presence of others discourages an individual from intervening in an emergency situation, against a bully, or during an assault or other crime. The greater the number of bystanders, the less likely it is for any one of them to provide help to a person in distress.

Dr.Philip Zimbardo , President of Heroic Imagination Project. mentioned that the idea is you should treat everyone as you would want them to treat you. It's the golden rule to do unto others. It promotes the notion of social community. with a sense of reciprocity , we all should help one another if we ever want anyone to help us. The men in the blue shirt in the video also depicts the typical example of bystander effect. He thinks that if others managed to see the pickpocketing and did not take any action. Why should i? He's influenced by the apathy of everyone else in the queue. The experiment on liverpool street station in london also depicts a typical bystander effect. However, the actor in suit is helped within 6 seconds and when the actor changed to a casual attire, he was not offered help for more than 20 minutes. It also determines on what social status is the person. Professor Helen Haste also imparts 2 conflicting rule of bystanders effect , one rule is we ought to help and the other rule is to do what everybody else is doing. -Comments by Tan Jun Hao from SUSS – eaneternity

Being Observant Being Skilled and Knowledgeable Guilt Feeling Good. (4) Case study 1 : Zhumadian Hit and Run footage *Warning Graphic Content* (4a) Case study on Zhumadian article. Horrifying footage has emerged online showing a woman being hit by a taxi and left lying in the middle of a crossroad for more than two minutes - and is then run over a second time. 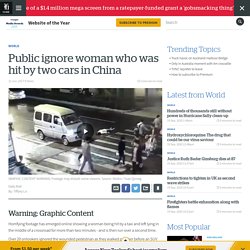 Over 20 onlookers ignored the wounded pedestrian as they walked past her before an SUV ran her over for a second time, according to Daily Mail. She was killed after the second accident, said the police. A video of the incident was uploaded by web user Yuan Qicong on Weibo, a Chinese social media platform, on June 7. The post has been viewed more than 26 million times. (4b) Comments on Zhumadian case study incident. (5) Case study 2 : Kitty Genovese and bystander effect.

The Kitty Genovese murder in Queens, New York, in 1964 is one of the most famous murder cases to come out of New York City and into the national spotlight.

She was found by neighbor Sophia Farrar, who screamed for someone to call the police. (6) Conclusion on bystanders effect by Jun Hao.