Last Week Tonight with John Oliver: Civil Forfeiture (HBO) Hacktivist Journo Barrett Brown And Lawyers Gagged. On September 4 in a Dallas courtroom, the prosecution and the defense in the Barrett Brown case agreed to a gag order. 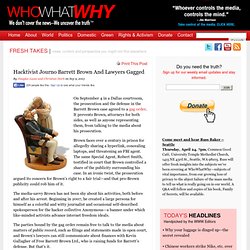 It prevents Brown, attorneys for both sides, as well as anyone representing them, from talking to the media about his prosecution. Brown faces over a century in prison for allegedly sharing a hyperlink, concealing laptops, and threatening an FBI agent. The same Special Agent, Robert Smith, testified in court that Brown controlled a share of the publicity surrounding his case. In an ironic twist, the prosecution argued its concern for Brown’s right to a fair trial—and that pro-Brown publicity could rob him of it.

The media-savvy Brown has not been shy about his activities, both before and after his arrest. An Outspoken Man Sits Mute The three-hour hearing found Brown in a strikingly atypical role. Guardian Story on Israel and N.S.A. Is Not 'Surprising' Enough to Cover. Many Times readers have been writing to me for several days about a story The Guardian broke last week, describing how the United States routinely shares with Israel intelligence information that the National Security Agency gathers on American citizens. 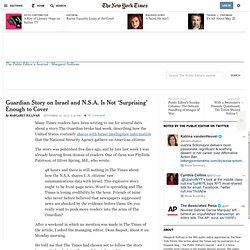 The story was published five days ago, and by late last week I was already hearing from dozens of readers. One of them was Phyllida Paterson, of Silver Spring, Md., who wrote: 48 hours and there is still nothing in The Times about how the N.S.A. shares U.S. citizens’ raw communications data with Israel. This explosive story ought to be front-page news. Word is spreading and The Times is losing credibility by the hour. US secrecy policy run as though formed by Orwell and Kafka, top official claims. Successive US presidents, including Barack Obama, have abused the system for handling classified information to expand their executive powers, the former senior official who oversaw state secrecy under George W Bush has claimed. 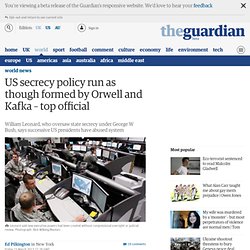 William Leonard, who was entrusted with ensuring proper treatment of state secrets by government agencies in the immediate aftermath of the 9/11 terrorist attacks, said that over the past decade both the Obama and the previous Bush administrations had manipulated their classification authority to create new executive powers without congressional oversight or judicial review. Leonard, the former head of the Information Security Oversight Office from 2002 to 2007, said that what was at stake was "the abuse of the very form of government we are operating under, as unilateral executive powers go unchallenged. " He said: "Governments have decided under the cloak of secrecy to unleash the brutality of violence in our name and that of our fellow citizens.

Timeline of Edward Snowden's revelations. Obama Is Laying The Foundations Of A Dystopian Future by Oliver Stone. On the campaign trail, Barack Obama lambasted the policies of George W Bush that had made the US an international pariah – war and contempt for human rights. 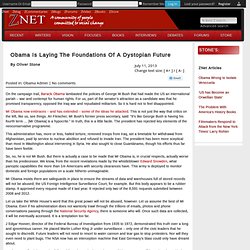 For us, part of the senator’s attraction as a candidate was that he promised transparency, opposed the Iraq war and repudiated militarism. So it is hard not to feel disappointed. Mr Obama now embraces – and has extended – some of the ideas he attacked. This is not just the way that critics on the left, like us, see things. Ari Fleischer, Mr Bush’s former press secretary, said: “It’s like George Bush is having his fourth term … [Mr Obama] is a hypocrite.” This administration has, more or less, halted torture, removed troops from Iraq, set a timetable for withdrawal from Afghanistan, paid lip service to nuclear abolition and refused to invade Iran.

So, no, he is not Mr Bush. Let us take the White House’s word that this great power will not be abused, however. Sequestration's Biggest Victim: The Public Defender System. It's roughly 164 miles from Lubbock, Texas, to Abilene; not the furthest drive you can do in the Lone Star State but still a bit of a haul. 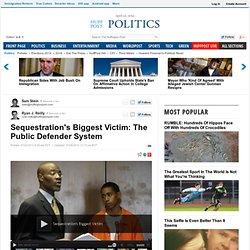 On a good day, you can make the trip in about three hours, which is what Helen Liggett discovered in April when she had to visit a client in the Taylor County Jail. Liggett is an assistant federal public defender for the Northern District of Texas, based in Lubbock. Her client Leroy Gream had been caught on camera loading an ATM onto a cart and attempting to steal it from Hendrick Memorial Hospital in Abilene on Christmas Day of last year. Gream, 55, pleaded guilty to bank theft, a charge that carries a maximum penalty of 10 years in prison and a $250,000 fine. But like most people who try to steal an ATM, he didn't have the money to pay for his defense. On April 8, she drove to Abilene to attend Gream's arraignment at the federal courthouse, which was scheduled for the next day. It doesn't make any sense. “These people are wonderful,” Elm said.