It's About Your Stance Not Circumstance, by Awakin Call Transcript. Janis: Jacques Verduin can speak with deep understanding about being worthy of our suffering. 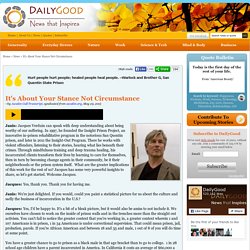 In 1997, he founded the Insight Prison Project, an innovative in-prison rehabilitative program in the notorious San Quentin prison, and later in 2011 the Insight-Out Program. There he works with violent offenders, listening to their stories, hearing what lies beneath their crimes. Through mindfulness training and deep trauma healing, his incarcerated clients transform their lives by learning to care for themselves, then in turn by becoming change agents in their community, be it their neighborhoods or the prison system itself. What are the greater implications of this work for the rest of us? Jacques has some very powerful insights to share, so let's get started. Jacques: Yes, thank you. Janis: We're just delighted.

Jacques: Yes, I'd be happy to. There are voices emerging that want to change that also within the system, and I think it's very important not to fall into the us and them fallacy. Home. Prison Mindfulness Institute. Centre for Crime and Justice Studies. Inside Time Latest Issue - the National Newspaper for Prisoners. Rawlings.pdf. Grendon Prison: a model for therapeutic care.

The only UK prison to have proven to reduce reoffending rates, HMP Grendon is a model for therapeutic care. 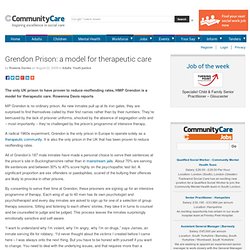 Rowenna Davis reports MP Grendon is no ordinary prison. As new inmates pull up at its iron gates, they are surprised to find themselves called by their first names rather than by their numbers. They’re bemused by the lack of prisoner uniforms, shocked by the absence of segregation units and – most importantly – they’re challenged by the prison’s programme of intensive therapy. A radical 1960s experiment, Grendon is the only prison in Europe to operate solely as a therapeutic community. All of Grendon’s 187 male inmates have made a personal choice to serve their sentences at the prison’s site in Buckinghamshire rather than in mainstream jails. By consenting to serve their time at Grendon, these prisoners are signing up for an intensive programme of therapy.

“I want to understand why I’m violent, why I’m angry, why I’m on drugs,” says James, an inmate serving life for robbery. COUNSELLING IN PRISONS NETWORK. Introductory Note for Prospective Buddhist Prison Chaplains. Thank you for your interest in our work. 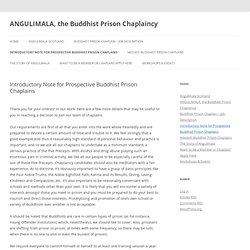 Here are a few more details that may be useful to you in reaching a decision to join our team of chaplains. Our requirements are first of all that you enter into the work whole-heartedly and are prepared to devote a certain amount of time and trouble to it. We feel strongly that a good example and thus a reasonably high standard of personal behaviour and practice is important, and so we ask all our chaplains to undertake as a minimum standard, a serious practice of the Five Precepts. With alcohol and drug abuse playing such an enormous part in criminal activity, we like all our people to be especially careful of the last of these Five Precepts.

Chaplaincy candidates should also be meditators with a fair experience. It should be noted that Buddhists are rare in certain types of prison (as for instance, Young Offender Institutions) which, nevertheless, we should like to cover. Ven. Spiritual Director. SourcePoint Global Outreach - Serving the welfare and upliftment of our local and global community.

COUNSELLING IN PRISONS NETWORK. Counselling%20in%20prisons. Index. COUNSELLING IN PRISONS NETWORK. Prison Mindfulness Institute. The Prison Mindfulness Institute (previously the Prison Dharma Network) is a non-profit organization founded in 1989 with the mission of supporting prisoners and prison volunteers in transformation through meditation and contemplative spirituality in prisons. 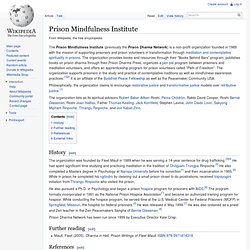 The organization provides books and resources through their "Books Behind Bars" program, publishes books on prison dharma through their Prison Dharma Press, organizes a pen pal program between prisoners and meditation volunteers, and offers an apprenticeship program for prison volunteers called "Path of Freedom". The organization supports prisoners in the study and practice of contemplative traditions as well as mindfulness awareness practices.[1][2] It is an affiliate of the Buddhist Peace Fellowship as well as the Peacemaker Community USA. Philosophically, the organization claims to encourage restorative justice and transformative justice models over retributive justice.[1] History[edit] Further reading[edit] Fleet Maull. Fleet Maull has been a student of the Vidyadhara, the Venerable Chogyam Trungpa Rinpoche since 1977 and is a student of Sakyong Mipham Rinpoche. 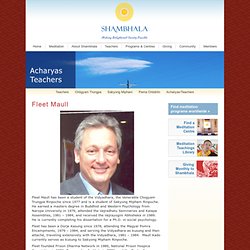 He earned a masters degree in Buddhist and Western Psychology from Naropa University in 1979, attended the Vajradhatu Seminaries and Kalapa Assemblies, 1981 – 1984, and received the Vajrayogini Abhisheka in 1989. He is currently completing his dissertation for a Ph.D. in social psychology. Fleet has been a Dorje Kasung since 1978, attending the Magyal Pomra Encampments, 1979 – 1984, and serving the Vidyadhara as kusung and then attaché, traveling extensively with the Vidyadhara, 1981 – 1984. Maull Kado currently serves as kusung to Sakyong Mipham Rinpoche. Fleet Maull. Fleet maull.