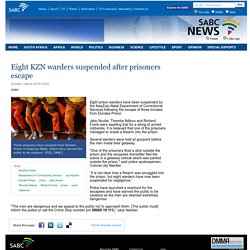 Police have warned the public to be cautious. (FILE, SABC) Eight prison warders have been suspended by the KwaZulu-Natal Department of Correctional Services following the escape of three inmates from Dundee Prison. Jabu Ncube, Themba Ndlovu and Richard Frank were awaiting trial for a string of armed robberies. It is believed that one of the prisoners managed to sneak a firearm into the prison. Several warders were held at gunpoint before the men made their getaway. Awaiting trial prisoners escape from E Cape prison:Thursday 25 December 2014. Police say the prisoners escaped through the roof. 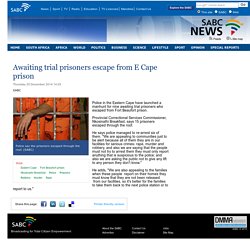 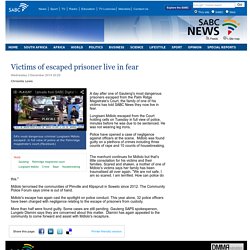 (Facebook) A day after one of Gauteng's most dangerous prisoners escaped from the Palm Ridge Magistrate's Court, the family of one of his victims has told SABC News they now live in fear. Lungisani Mdlolo escaped from the Court holding cells on Tuesday in full view of police, minutes before he was due to be sentenced. He was not wearing leg irons. Police have opened a case of negligence against officers at the scene.

The manhunt continues for Mdlolo but that's little consolation for his victims and their families. Mdlolo terrorised the communities of Pimville and Klipspruit in Soweto since 2012. Mdlolo's escape has again cast the spotlight on police conduct. More than half were found guilty. Dangerous detainees escape from N West prison:Sunday 23 November 2014. Police are appealing to the North West community to help them in apprehending the suspects. 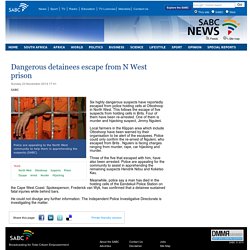 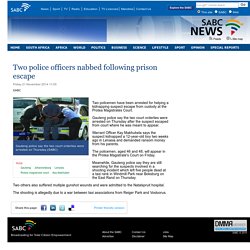 (SABC) Two policemen have been arrested for helping a kidnapping suspect escape from custody at the Protea Magistrates Court. Gauteng police say the two court orderlies were arrested on Thursday after the suspect escaped from court where he was meant to appear. Warrant Officer Kay Makhubela says the suspect kidnapped a 12-year-old boy two weeks ago in Lenasia and demanded ransom money from his parents. The policemen, aged 46 and 48, will appear in the Protea Magistrate's Court on Friday.

Meanwhile, Gauteng police say they are still searching for the suspects involved in a shooting incident which left five people dead at a taxi rank in Windmill Park near Boksburg on the East Rand on Thursday. Two others also suffered multiple gunshot wounds and were admitted to the Natalspruit hospital. The shooting is allegedly due to a war between taxi associations from Reiger Park and Vosloorus. Annanias Mathe tries to escape again:Sunday 6 October 2013. The break-out attempt was uncovered on Tuesday after a warder heard noises from Mathe's cell. 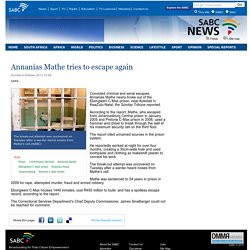 (SABC) Convicted criminal and serial escapee, Annanias Mathe nearly broke out of the Ebongweni C-Max prison, near Kokstad in KwaZulu-Natal, the Sunday Tribune reported. According to the report, Mathe, who escaped from Johannesburg Central prison in January 2005 and Pretoria C-Max prison in 2006, used a hammer and chisel to break through the wall of his maximum security cell on the third floor. Losperfontein prison escapees identified:Wednesday 17 April 2013. Popcru member arrested for attempted prisoner escape:Tuesday 6 November 2012. A police van was bombed to help the prisoners escape(SABC) Trade union, Police and Prisons Civil Rights Union (Popcru) has welcomed the arrest of a court orderly for allegedly being involved in the attempted escape by awaiting trial prisoners, while on their way to Johannesburg Prison. 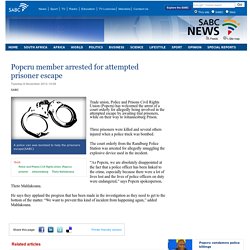 Three prisoners were killed and several others injured when a police truck was bombed. The court orderly from the Randburg Police Station was arrested for allegedly smuggling the explosive device used in the incident. “As Popcru, we are absolutely disappointed at the fact that a police officer has been linked to the crime, especially because there were a lot of lives lost and the lives of police officers on duty were endangered,” says Popcru spokesperson, Theto Mahlakoana. Popcru heaps praise to police for evading escape :Wednesday 24 October 2012. 36 awaiting-trial prisoners tried to escape. 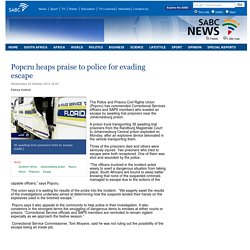 Probe into prison truck blast underway :Tuesday 23 October 2012. Police say preliminary investigations indicate the blast was part of an escape plot(SABC) The Department Correctional Services is investigating the probability of an inside job after three prisoners were killed and 14 injured by an explosion in a truck transporting them to Johannesburg prison. 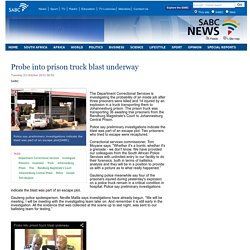 Suspected Hazyview escape mastermind arrested:Tuesday 10 July 2012. The other 10 awaiting trial suspects are still at large(SABC) Police in Mpumalanga have managed to get hold of one of the 11 suspects who escaped from the Hazyview police station's holding cells yesterday. 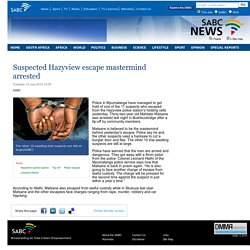 Thirty-two-year old Mahlatsi Matsane was arrested last night in Bushbuckridge after a tip-off by community members. Matsane is believed to be the mastermind behind yesterday's escape. Police say he and the other suspects used a hacksaw to cut a burglar door and flee. The other 10 trial awaiting suspects are still at large. Police have warned that the men are armed and dangerous. According to Hlathi, Matsane also escaped from lawful custody while in Skukuza last year. Three escaped prisoners rearrested:Wednesday 14 March 2012.