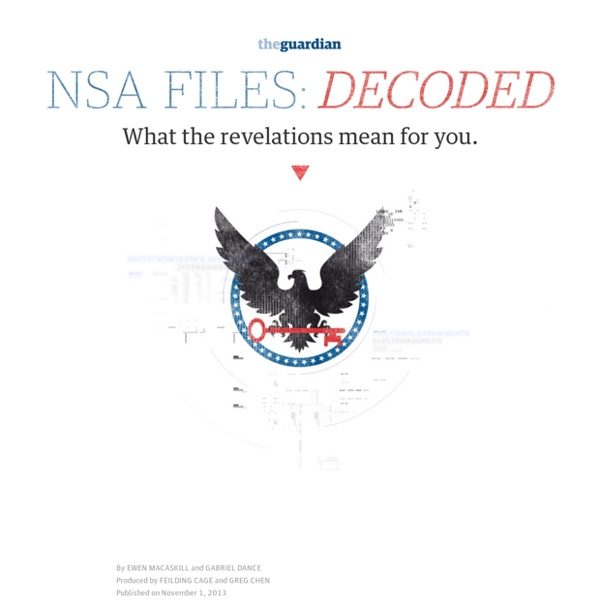 Two factors opened the way for the rapid expansion of surveillance over the past decade: the fear of terrorism created by the 9/11 attacks and the digital revolution that led to an explosion in cell phone and internet use. But along with these technologies came an extension in the NSA’s reach few in the early 1990s could have imagined. Details that in the past might have remained private were suddenly there for the taking. Chris Soghoian Principal technologist, ACLU NSA is helped by the fact that much of the world’s communications traffic passes through the US or its close ally the UK – what the agencies refer to as “home-field advantage”. The Snowden documents show that the NSA runs these surveillance programs through “partnerships” with major US telecom and internet companies. The division inside the NSA that deals with collection programs that focus on private companies is Special Source Operations, described by Snowden as the “crown jewels” of the NSA. Jeremy Scahill Fiber-optic cable

Snowden Uncovers Shocking Truth Behind Chemtrails Share This Article With Others Edward Snowden, the hacker who gained access to every secret corner of the Internet during his tenure at the NSA, has come forward with details of a classified project to alter the world’s climate. The shocking truth, as he says, is that chemtrails are part of a benevolent program aimed at countering global warming. By cooperating in secret with jet fuel manufacturers, government agents have carefully kept the massive chemtrail efforts completely under wraps. Snowden added,

Occult Battery Definition: How Humans are Used as Batteries When we think of a battery, we often think of an object that stores electrical energy for powering electronic devices. This common definition of battery only shows us the overt meaning of battery. To find its deeper meanings, you need to know how the word battery is used in other subjects, such as law, business, and commerce. Once you know the relation of the word battery to law, business, and commerce, you will know what I mean when I say that in the occult world, the word battery is sometimes used to describe the process of harnessing the energy of slave workers.

Home Appliance Energy Use In the United States, over 20% of our total energy consumption is residential. In fact, in the United States, we are the 7th largest per capita consumer of residential energy. Where is all of that energy going? Planet Money Makes A T-Shirt Why A T-Shirt? We wanted to see the hidden world behind clothes sold in this country, so we decided to make a T-shirt. We wanted to make an ordinary shirt like the vast majority of the shirts sold in this country — not organic cotton, not hand-sewn in the United States. To figure out how many shirts to make, and to raise money to pay for them, we turned to Kickstarter. The Untold Story of Silk Road “I imagine that someday I may have a story written about my life and it would be good to have a detailed account of it.”—home/frosty/documents/journal/2012/q1/january/week1 The postman only rang once. Curtis Green was at home, greeting the morning with 64 ounces of Coca-Cola and powdered mini doughnuts. Fingers frosted synthetic white, he was startled to hear someone at the door.

After Senate vote, NSA prepares to shut down phone tracking program Hours after the Senate balked at reauthorizing the bulk collection of U.S. telephone records, the National Security Agency began shutting down a controversial program Saturday that senior intelligence and law enforcement officials say is vital to track terrorists in the United States. The Senate had debated into early predawn hours Saturday but failed to reach a deal to reform the program or extend its life beyond May 31, when the law used to authorize it is set to expire. Lawmakers then left on a weeklong recess, vowing to return at the end of it to try again in a rare Sunday session.

HUD Wants to Outlaw Tiny Homes and RV Living - Return to Now The U.S. Department of Housing and Urban Development – which ironically was founded to end poverty and racial injustice in housing – proposed a law last month that would make living in a recreational vehicle – and potentially a tiny home – illegal. You can help prevent this proposal from becoming law by sending comments to regulations.gov by April 11!! While recreational vehicles are currently exempt from housing regulations, the proposed change would allow them to keep their exempt status only so long as no one is “living” in them.