Echo Chamber: Listening to La Jetée. 'Thrilling and prophetic': why film-maker Chris Marker's radical images influenced so many artists. Chris Marker was a phantom, an escape artist, a shapeshifter. 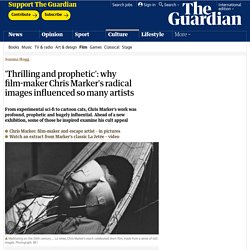 He told friends he came from Ulan Bator, Mongolia. Born in 1921 in a pleasant Parisian suburb, Christian-François Bouche-Villeneuve racked up many pseudonyms and monikers: Sandor Krasna, Jacopo Berenzi, Fritz Markassin. Early on, as if in anticipation of the new vocabularies and identities that would proliferate in the digital era, he signed himself Chris.Marker. He rarely gave interviews and was happy to be represented by images of a cat. But he was no hermit or recluse. Sans Soleil - The First Minute.

Chris Marker : Sans Soleil. Sans Soleil / Sunless The first image he told me about was of three children on a road in Iceland, in 1965. 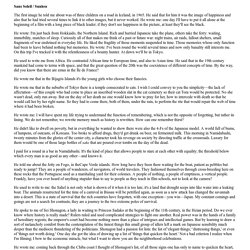 He said that for him it was the image of happiness and also that he had tried several times to link it to other images, but it never worked. He wrote me: one day I'll have to put it all alone at the beginning of a film with a long piece of black leader; if they don't see happiness in the picture, at least they'll see the black. He wrote: I'm just back from Hokkaido, the Northern Island.

Rich and hurried Japanese take the plane, others take the ferry: waiting, immobility, snatches of sleep. He used to write me from Africa. He wrote me that in the Bijagós Islands it's the young girls who choose their fiancées. He wrote me that in the suburbs of Tokyo there is a temple consecrated to cats. He wrote me: I will have spent my life trying to understand the function of remembering, which is not the opposite of forgetting, but rather its lining. 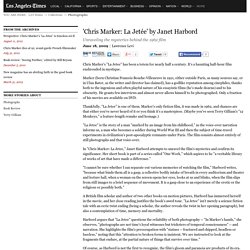 It's a haunting half-hour film enshrouded in mystique. Marker (born Christian Francois Bouche-Villeneuve in 1921, either outside Paris, as many sources say, or in Ulan Bator, as the writer and director has claimed), has a godlike reputation among cinephiles, thanks both to the ingenious and often playful nature of his essayistic films (he's made dozens) and to his obscurity.

He grants few interviews and almost never allows himself to be photographed. Only a fraction of his movies are available on DVD. Thankfully, "La Jetee" is one of them. "La Jetee" is the story of a man "marked by an image from his childhood," as the voice-over narration informs us, a man who becomes a soldier during World War III and then the subject of time-travel experiments in civilization's post-apocalyptic remnants under Paris. In "Chris Marker: La Jetee," Janet Harbord attempts to unravel the film's mysteries and confirm its significance. The Eternal in the Blink of an Eye, Chris Marker (1921-2012) In one extraordinary moment of cinematic history, a sleeping woman awakes. 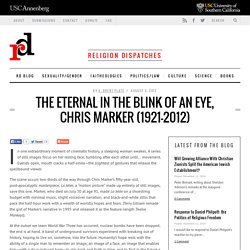 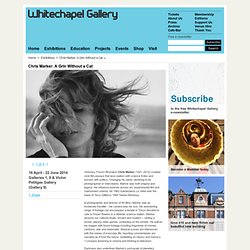 Changing his name, declining to be photographed or interviewed, Marker was both enigma and legend. His influence extends across art, experimental film and mainstream cinema: his 1962 masterpiece La Jetée was the basis of Terry Gilliam’s 1995 Twelve Monkeys. A photographer and director of 60 films, Marker was an inveterate traveller - his camera was his eye. His astonishing range of footage can encompass a temple in Tokyo devoted to cats to frozen flowers in a Siberian science station. Sans Soleil - Poetry will be made by everyone. Tous autour de Chris Marker ! Le 26 novembre, Mediapart met Chris Marker à l'honneur – il aurait détesté l'expression, de surcroît dotée d'une rime pauvre ! 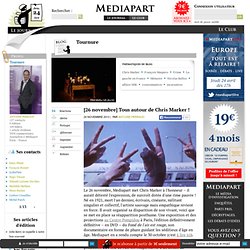 The Lost Futures of Chris Marker by J. Hoberman. Gracefully off-kilter, stylized as semaphores, the shadow of a man and an outlined woman are positioned at the center of a sea shell spiral. 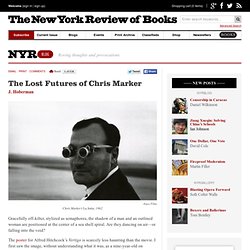 Are they dancing on air—or falling into the void? The poster for Alfred Hitchcock’s Vertigo is scarcely less haunting than the movie. I first saw the image, without understanding what it was, as a nine-year-old on summer vacation and carried the memory with me for some twelve or fifteen years before I first saw the film.