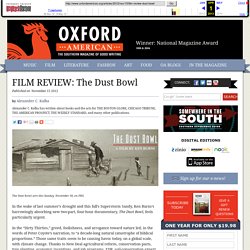 In the wake of last summer’s drought and this fall’s Superstorm Sandy, Ken Burns’s harrowingly absorbing new two-part, four-hour documentary, The Dust Bowl, feels particularly urgent. In the “Dirty Thirties,” greed, foolishness, and arrogance toward nature led, in the words of Peter Coyote’s narration, to “a decade-long natural catastrophe of biblical proportions.” Those same traits seem to be causing havoc today, on a global scale, with climate change. Thanks to New Deal agricultural reform, conservation pacts, tree planting, economic incentives, and job programs, FDR, soil-conservation expert Hugh Bennett, and their tireless team turned things around in the Great Plains. 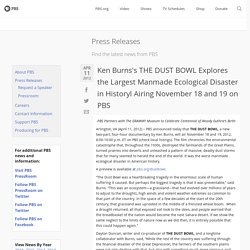 ET on PBS (check local listings). ‘The Dust Bowl,’ by Ken Burns, on PBS. Photo Given how long it takes Ken Burns to finance, assemble and promote his documentaries, the timing of “The Dust Bowl” is eerily appropriate. 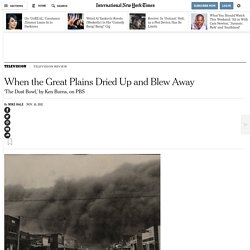 It arrives on Sunday on PBS in the middle of a spate of quickly produced programs about Hurricane Sandy and climate change, as if Mr. Burns knew that this would be just the right moment for a cautionary story about human interference with the environment. Ken Burns: Dust Bowl the Greatest Man-Made Eco Disaster in U.S. History - Climate Desk. And what it teaches us about future climate catastrophes. 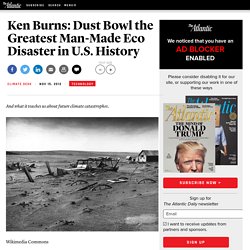 Wikimedia Commons As the East Coast licks its wounds from superstorm Sandy, many in New York and New Jersey are still without power, wondering how on Earth it got this bad. Why the New Ken Burns Documentary on the Dust Bowl Has Lessons to Teach Us. Climate change and the environment were the forgotten issues of the 2012 election—at least, before Superstorm Sandy put them square on the map. 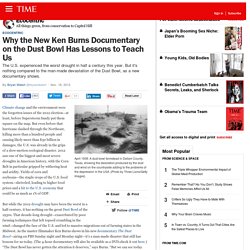 But even before that hurricane slashed through the Northeast, killing more than a hundred people and causing likely more than $50 billion in damages, the U.S. was already in the grips of a slow-motion ecological disaster. 2012 saw one of the biggest and most severe droughts in American history, with the Corn Belt in particular gripped by withering heat and aridity.

Yields of corn and soybeans—the staple crops of the U.S. food system—shriveled, leading to higher food prices and a hit to the U.S. economy that could be as much as 1% of GDP. Dust Bowl Blues. A desolate field near Taiban, New Mexico, in June. 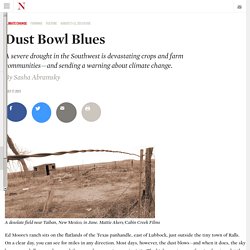 Mattie Akers/Cabin Creek Films Ed Moore’s ranch sits on the flatlands of the Texas panhandle, east of Lubbock, just outside the tiny town of Ralls. On a clear day, you can see for miles in any direction. ‘The Great Gatsby,’ Interpreted by Baz Luhrmann. Video The best way to enjoy Baz Luhrmann’s big and noisy new version of “The Great Gatsby” — and despite what you may have heard, it is an eminently enjoyable movie — is to put aside whatever literary agenda you are tempted to bring with you. 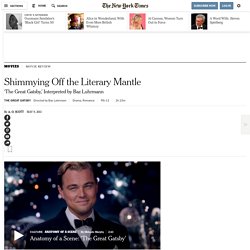 I grant that this is not so easily done. F. Scott Fitzgerald’s slender, charming third novel has accumulated a heavier burden of cultural significance than it can easily bear. Short and accessible enough to be consumed in a sitting (as in “Gatz,” Elevator Repair Service’s full-text staged reading), the book has become, in the 88 years since its publication, a schoolroom staple and a pop-cultural totem. John Steinbeck Heirs Now Feuding Over Steven Spielberg 'Grapes of Wrath' Adaptation. Over the years, major Hollywood studios have flirted with making new adaptations of John Steinbeck's major works including The Grapes of Wrath, Of Mice and Men and East of Eden. 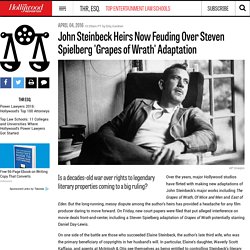 But the long-running, messy dispute among the author's heirs has provided a headache for any film producer daring to move forward. On Friday, new court papers were filed that put alleged interference on movie deals front-and-center, including a Steven Spielberg adaptation of Grapes of Wrath potentially starring Daniel Day-Lewis. On one side of the battle are those who succeeded Elaine Steinbeck, the author's late third wife, who was the primary beneficiary of copyrights in her husband's will. In particular, Elaine's daughter, Waverly Scott Kaffaga, and agents at McIntosh & Otis see themselves as being entitled to controlling Steinbeck's literary properties thanks to the will and later settlement agreements.

The Kaffaga camp now wants the legal madness to end. Hornbeck_dp39.pdf. Reader's Guide for The Worst Hard Time published by Houghton Mifflin Company. Why a book on the Dust Bowl now? 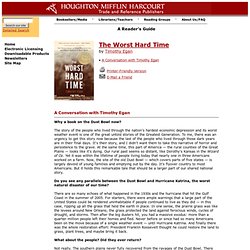 The story of the people who lived through the nation's hardest economic depression and its worst weather event is one of the great untold stories of the Greatest Generation. To me, there was an urgency to get this story now because the last of the people who lived through those dark years are in their final days. It's their story, and I didn't want them to take this narrative of horror and persistence to the grave. THE WAR . About the Series . Ken Burns . Biography. Ken Burns on "The Dust Bowl" NEWS OK: Acclaimed documentary filmmaker Ken Burns knows a thing or two about history — which makes him something of an expert on memory, as well. 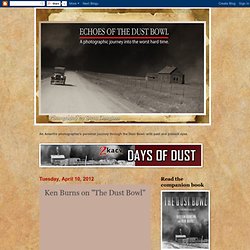 Filmmaker Ken Burns is producing a four-hour documentary, “The Dust Bowl,” for PBS. “One thing you learn after awhile in this history business is you think that the past is really far away, and in many cases it is,” Burns said in a recent phone interview. Back Story: History's Documentarian - National Trust for Historic Preservation. The Grapes of Wrath. Arnold's petty cash By Helen Jackson Arnold Schwarzenegger was back, and sticking around a freezing Leicester Square in London for the European preem of Lionsgate's "The Last Stand" on Jan. 22. Enjoy the 'Flight' Twenty-four hours prior to a proposed Brit blizzard, the crew of Paramount's "Flight" safely touched down for Thursday's U.K. take-off. 'Lion' reigns at weekend B.O. By Andrew Stewart Not to be outdone by two family films, Sony estimated a weekend debut of $20.6 million for "Moneyball" -- beat only by Disney's remarkable 3D re-release of "The Lion King," which won the domestic… Warners, CBS Films take a 'Stand' By Dave McNary Warner Bros. and CBS Films are teaming on a feature version of Stephen King's post-apocalyptic novel "The Stand.

" Spielberg Wins Film Rights To ‘The Grapes Of Wrath’, Will Produce Remake. In 1939, John Steinbeck told a powerful tale about The Joads, a family who leave the poverty-laden and drought-ridden southern plains known as “The Dust Bowl” with dreams of a new life in California. The Grapes Of Wrath won a Pulitzer Prize and the following year, directing legend John Ford gave the world the first film adaptation with Henry Fonda as Tom Joad. It won two Oscars and is ranked #23 of AFI’s “Top 100 Films Of All Time.” Since then, we’ve seen several send ups of this story, including the “South Park” episode where the country “runs out of internet,” leaving families heading out to California because (you guessed it) they hear there’s internet there. Deadline went on to say that Spielberg and DreamWorks have confirmed that he will only produce, NOT direct* this latest version of The Grapes Of Wrath…but I’m sure he’ll have plenty of say on all aspects INCLUDING casting.

The Dust Bowl: Dark, dirty times. It was the worst human-caused ecological disaster in U.S. history, and among the worst in the world. The lessons from it should be applied to problems today. On "The Dust Bowl" with Ken Burns and Tim Egan. Are We Ignoring a Return to the Dust Bowl? OETA Story on the Dust Bowl: Then and Now aired 11-16-12. Complete Program Transcript . Surviving the Dust Bowl . WGBH American Experience.

Narrator: In 1931, there was no better place to be a farmer than the Southern Plains. The rest of the nation was in the grip of the Great Depression, but in wheat country they were reaping a record-breaking crop. Plains farmers had turned untamed prairie into one of the most prosperous regions in the country. Lawrence Svobida (Matthew Modine, voice over): I came to Meade County, Kansas fired with ambition to become a wheat farmer. Narrator: Lawrence Svobida had come from Nebraska’s Corn Belt to start his own farm. He was one of those who believed he had found paradise. Lawrence Svobida (Matthew Modine, voice over): Harvesting wheat was a thrill to me. It was breath-taking — hundreds of acres of wheat that were mine.

Narrator: At the turn of the century, when settlers gazed upon the Southern Plains, they had looked out over a vast expanse of shrubs and grasses. The newcomers did not realize that they were witnessing only a brief moment in an endless cycle of rain and drought. J.R. J.R. J.R. Ken Burns - The Colbert Report - 2012-12-11. THE DUST BOWL. New Ken Burns documentary to air this weekend Ken Burns, director of many beloved multipart documentaries ("The Civil War," "Baseball," "Jazz," "The War"), has a new one out on PBS this weekend: "The Dust Bowl," screening Sunday and Monday on KCTS-9 here, takes a look at a great ecological disaster, brought about in the 1930s after a long drought, questionable farming practices and high winds caused tons of soil and dust to blow across the landscape -- destroying crops, suffocating animals, and driving numerous families into poverty. Burns located footage from the disaster, unearthed photographs and interviewed survivors (26 people, though several have died since filming); should be fascinating viewing.