Over implantaten - about medical devices (implants) 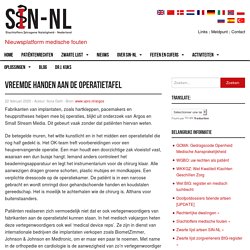 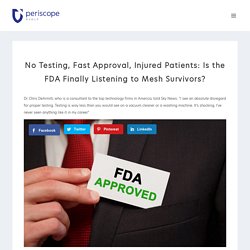 Chris DeArmitt, who is a consultant to the top technology firms in America, told Sky News: “I see an absolute disregard for proper testing. Testing is way less than you would see on a vacuum cleaner or a washing machine. It’s shocking. I’ve never seen anything like it in my career.” You might be wondering “Testing for what?” This loophole in the FDA is called the 510(k) process and it has allowed millions of patients to be irreparably harmed – and even killed – by the very device that was intended to help them. What is the FDA’s 510(k) Process? The FDA’s 510(k) process allows medical devices companies to quickly fast-track a product to market based on a pre-approved product.

Transvaginal Mesh A medical device can be approved for market based on a previous model, even one that was recalled. But this story includes many more products beyond vaginal mesh-like IVC filters to prevent blood clots, Essure female sterilization devices, hip replacement products, and countless others. Privacy settings. AD en Krant.nl maken onderdeel uit van DPG Media. 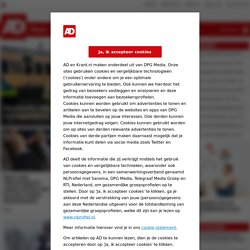 By Douglas Dalby / March 6, 2019 The Federal Agency for Medicines and Health Products (FAMHP) began its probe following detailed reports in the Implant Files, a global collaboration led by the International Consortium of Investigative Journalists that detailed poor regulatory regimes worldwide governing medical devices. The Belgian investigation is looking into direct payments and benefits allegedly provided to doctors by medical device manufacturers and sales personnel. “Everyone in the sector knows these practices,” one manufacturer told Lars Bové, a journalist at De Tijd, a Belgian newspaper that collaborated on the Implant Files.

Bové was one of two journalists quizzed by FAMHP about the substance of their findings. Implant Files honored with multiple awards around world. ICIJ's Implant Files investigation. 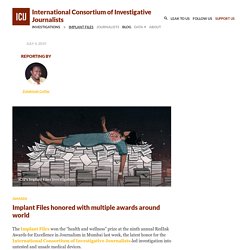 The Implant Files won the “health and wellness” prize at the ninth annual RedInk Awards for Excellence in Journalism in Mumbai last week, the latest honor for the International Consortium of Investigative Journalists-led investigation into untested and unsafe medical devices. Among other revelations, ICIJ partner the Indian Express found that dozens of medical devices recalled in the United States for safety reasons were still on shelves in Indian hospitals and doctors offices, and were being implanted in patients.

ICIJ partners Ritu Sarin, Kaunain Sheriff and Jay Mazoomdaar at the Indian Express accepted the award. In the U.S., the Implant Files team has won, or shared, top honors in a dozen major contests. These include the Robert D.G. In March, the ICIJ team won the top prize in the business and finance category from the Scripps Howard Foundation, and also won the Impact Award, given to the top overall category winner. European health ministers fight to postpone medical device safety laws. German and Irish health ministers are leading calls for key elements of new European safety laws on medical devices to be effectively postponed, arguing that a lack of readiness among regulators risks creating shortages of vital implants and surgical equipment. 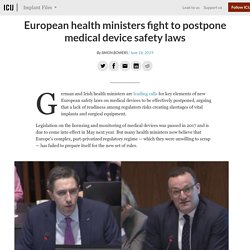 Legislation on the licensing and monitoring of medical devices was passed in 2017 and is due to come into effect in May next year. But many health ministers now believe that Europe’s complex, part-privatized regulatory regime — which they were unwilling to scrap — has failed to prepare itself for the new set of rules. 6 miljoen meldingen over implantaten openbaar gemaakt door Amerikaanse FDA. FDA Releases Vast Trove of Hidden Medical Device Injury and Malfunction Reports. For two decades, the regulator charged with overseeing medical device safety in the United States allowed manufacturers to conceal from public view serious injuries and other malfunctions associated with implants and other medical products, from breast implants to surgical staplers. 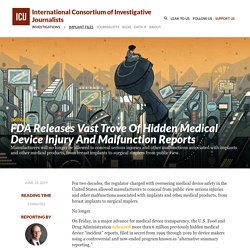 No longer. On Friday, in a major advance for medical device transparency, the U.S. Medical Device Dangers: A special KVUE broadcast. Will Europe's clampdown on faulty medical devices hurt patients? Data Suggest That Implants May Pose Risk Of Later Harm. US Halts Sale of Vaginal Mesh Blamed for Thousands of Injuries. In a major women’s health action, the United States has blocked sales of vaginal mesh used for the treatment of pelvic organ prolapse, the U.S. 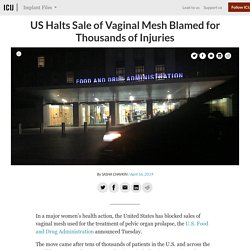 Food and Drug Administration announced Tuesday. The move came after tens of thousands of patients in the U.S. and across the world have reported serious complications, including intense pain and bleeding, after they were implanted the medical device, which is commonly used to prevent the bladder and uterus from dropping or pressing into the vaginal area. “Patient safety is our highest priority, and women must have access to safe medical devices,” said Dr. Jeffrey Shuren, the director of the FDA’s Center for Devices and Radiological Health, in a press release from the agency.

“The FDA has committed to taking forceful new actions to enhance device safety and encourage innovations that lead to safer medical devices.” For many patients and doctors, the ban was long overdue. TGA overhauls medical implant rules and admits 'more can be done' to protect patients. Updated earlier today at 1:39amThu 4 Apr 2019, 1:39am Australians with medical implants like plates, stents and pelvic mesh could soon have their devices tracked with a barcode system under a new plan health authorities are calling the biggest shake-up in patient safety in 30 years. 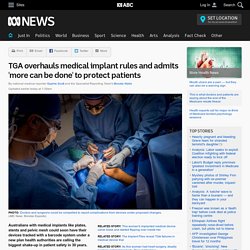 Key points: Australian health authorities release their plan to tighten medical implant regulation It includes proposals to track devices with a barcode system and possible mandatory reporting for doctors Patients say transparency is key and want more information about the devices going into their bodies The plan comes after the ICIJ and ABC Implant Files investigation Federal regulators acknowledged patient safety needed to be boosted after an investigation by the International Consortium of Investigative Journalists (ICIJ) and the ABC highlighted serious problems with a range of medical devices, including pelvic mesh and breast implants. 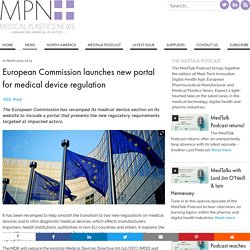 It has been revamped to help smooth the transition to two new regulations on medical devices and in vitro diagnostic medical devices, which affects manufacturers, importers, health institutions, authorities in non-EU countries and others. It explains the main differences between the current Directives and the new regulations, and highlights the timeline for the new transition along with deadlines for implementation. 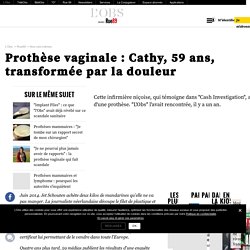 Près de 4.000 incidents liés à des implants signalés en Belgique depuis 2013. Belgium Investigates Medical Device Bribery Allegations In Wake Of Implant Files. ‘It is a big problem’: European lawmakers discuss medical device oversight. Europe should force medical equipment companies to set up a fund to help victims of faulty devices as part of a complete overhaul of legislation governing the industry, a European parliamentary committee heard Wednesday. A Dutch Member of the European Parliament (MEP) Annie Schreijer-Pierik proposed the initiative during a wide-ranging address in which she said patients were deliberately being kept in the dark about the potential risks involved in medical device implantation and subsequent failures by the absence of available public data.

“You can say it’s not such a big problem, but if it affects you, it is a big problem no matter what you say,” she observed. Schreijer-Pierik also called on Europe to follow the example set by Germany and the Netherlands in setting up a register of implants. Bowers worked extensively on the Implant Files, a global collaboration that detailed poor regulatory regimes worldwide governing such devices. The Implant Files Sparked Reform Around The World. Here’s Why We're Still Reporting.

Our team of more than 200 journalists spent a year investigating medical implants because of people like Karen Randell. Randell, who lives in Auckland, New Zealand, says a product intended to repair her abdominal wall and prevent hernias has instead caused unending agony. “I barely leave my home because of the pain,” she told us. Karen Randell, right, with her partner Des Carppe. Her implant, called Ethicon Physiomesh, was recalled globally by Johnson & Johnson in 2016 because of abnormally high complication rates.

Thousands of women have sued, claiming the mesh caused bleeding, severe pain and a host of other complications. Randell, who says she is simply “existing,” is one of 3,000 people from 55 countries patients who responded to an ICIJ callout — a number that doesn’t include hundreds of patients who we spoke with while reporting the initial stories. Britain Considers Medical Implants Registry to Improve Patient Safety. How Lobbying Blocked European Safety Checks For Dangerous Medical Implants. Implant Files in Europe: Patients will be heard as safety failings are laid bare. Politicians, regulators, and prosecutors across Europe have begun reacting to Implant Files revelations that exposed questionable practices, safety failures and regulatory lapses — and gave voice to a growing body of patients who feel misled and ignored.

In the Netherlands, Jacqueline Roes told her story to ICIJ media partners AVROTROS Radar. “I know the silicone is going to kill me,” she said. “I’m sure of it. I feel it. Patients Across The World Outraged By Failure To Inform Them Of Device Dangers. There are few concepts in medicine considered more fundamental than a doctor’s duty to alert patients to the potential hazards of a treatment, a concept known as informed consent. Yet more than 2,000 patients have told the International Consortium of Investigative Journalists through surveys and interviews that their physicians didn’t tell them about basic risks with a medical implant. The consequences were often dire. In Diest, Belgium, doctors implanted Katia Vanonckelen with vaginal mesh that can cause severe pain and damage to internal organs. Medtech Giant Pushes Boundaries As Casualties Mount And Sales Soar. In the autumn of 2008, medical device giant Medtronic was in a tailspin.

Profits were sliding. The company was battling hundreds of lawsuits over a heart device that was unnecessarily shocking some patients and failing to work at all in others. Authorities in the United States were pursuing allegations that Medtronic had bribed doctors across Europe to use its products. Only months before, the company had agreed to pay $75 million to settle allegations that a subsidiary defrauded a U.S. government health program. On Sunday night, Oct. 12, 2008, Medtronic’s ethics officer shipped three folders of documents marked confidential to inspectors at the U.S. Fortune. France’s national health regulator refused to renew approval Tuesday for two types of Allergan textured breast implants.

That means Allergan cannot sell its Microcell and Biocell textured breast implants in Europe. The agency advises patients with the implants to undergo regular checks with their doctors for a blood cancer called anaplastic large cell lymphoma (ALCL), which occurs more often in women with textured breast implants. Plastic surgeons have identified more than 600 cases worldwide. ALCL is treatable. The U.S. In November, the International Consortium of Investigative Journalists reported on the lack of transparency and rigor in government oversight of medical devices. The Guardian estimates that the medical technology market in Europe is worth around $125 billion a year, so regulators are up against a lot of economic heft. Overheid neemt maatregelen tegen ziekmakende implantaten.