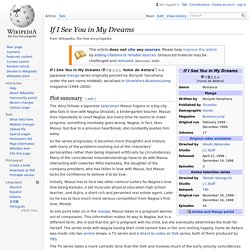 Is a Japanese manga series originally penned by Noriyuki Yamahana under the pen name HANAKO, serialized in Shueisha's Business Jump magazine (1994–2000). Plot summary[edit] The story follows a Japanese salaryman Masuo Fugano in a big city who falls in love with Nagisa Shiozaki, a kindergarten teacher. Masuo tries repeatedly to court Nagisa, but every time he seems to make progress, something inevitably goes wrong. Nagisa, in fact, likes Masuo, but due to a previous heartbreak, she constantly pushes him away. As the series progresses, it becomes more thoughtful and mature, with many of the problems evolving out of the characters' personalities rather than being imposed artificially by circumstances.

Initially, Masuo has to face two other comical suitors for Nagisa's love. Emma (manga) Set in Victorian London at the end of the 19th century, Emma is the story of a maid who falls in love with a member of the gentry. 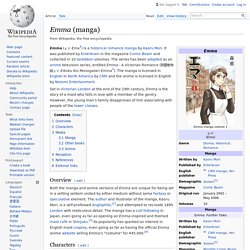 However, the young man's family disapproves of him associating with people of the lower classes. Both the manga and anime versions of Emma are unique for being set in a setting seldom visited by either medium without some fantasy or speculative element. The author and illustrator of the manga, Kaoru Mori, is a self-professed Anglophile,[2] and attempted to recreate 1895 London with meticulous detail. Your Lie in April. Your Lie in April, known in Japan as Shigatsu wa Kimi no Uso (四月は君の嘘? 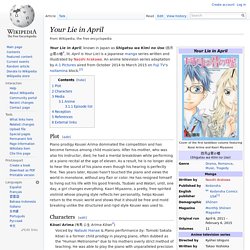 , lit. April is Your Lie) is a Japanese manga series written and illustrated by Naoshi Arakawa. An anime television series adaptation by A-1 Pictures aired from October 2014 to March 2015 on Fuji TV's noitamina block.[2] Plot[edit] Piano prodigy Kousei Arima dominated the competition and has become famous among child musicians. Toradora! An Internet radio show was broadcast between September 2008 and May 2009 hosted by Animate TV. 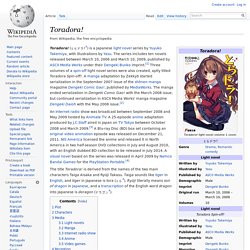 A 25-episode anime adaptation produced by J.C.Staff aired in Japan on TV Tokyo between October 2008 and March 2009.[3] A Blu-ray Disc (BD) box set containing an original video animation episode was released on December 21, 2011. NIS America licensed the anime and released it in North America in two half-season DVD collections in July and August 2010, with an English dubbed BD collection to be released in July 2014. A visual novel based on the series was released in April 2009 by Namco Bandai Games for the PlayStation Portable.[4] Plot[edit] Toradora! ' Taiga has a negative attitude towards others and will not hesitate to snap at people.

My Little Monster. Plot[edit] My Little Monster focuses on the relationship between Shizuku Mizutani, who has absolutely no interests except in studying and her plans for the future, and a boy named Haru Yoshida, who sits next to Shizuku in class but rarely attends school. 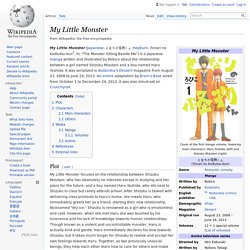 My Love Story!! Story[edit] The story follows Takeo Gouda, a tall and muscular student who doesn't have much luck with women, as every girl he likes ends up falling for his handsome best friend, Makoto Sunakawa. 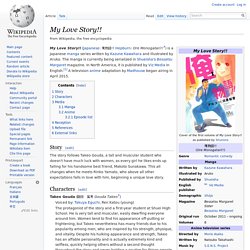 This all changes when he meets Rinko Yamato, who above all other expectations falls in love with him, beginning a unique love story. Characters[edit] Takeo Gouda (剛田 猛男, Gouda Takeo?) Voiced by: Takuya Eguchi, Ren Katou (young) The protagonist of the story and a first-year student at Shuei High School. Hakushaku to Yōsei. An anime adaptation was broadcast from September to December 2008. 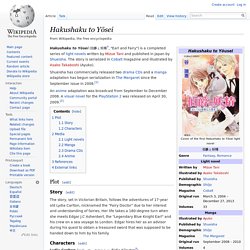 A visual novel for the PlayStation 2 was released on April 30, 2009.[2] Plot[edit] Story[edit] The story, set in Victorian Britain, follows the adventures of 17-year old Lydia Carlton, nicknamed the "Fairy Doctor" due to her interest and understanding of fairies. Her life takes a 180-degree turn when she meets Edgar J.C Ashenbert, the "Legendary Blue Knight Earl" and his crew on a sea voyage to London. 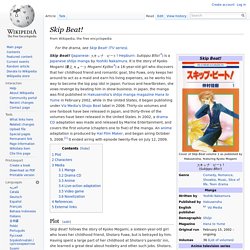 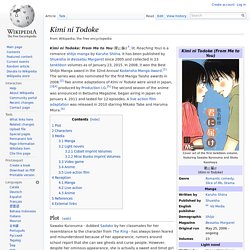 Voiced by: Mamiko Noto (anime), Mikako Tabe (live-action) Sawako is a shy yet honest girl in search of friendship, but her resemblance to the horror film character Sadako Yamamura makes this difficult. Her shy and modest nature prevents her from correcting people's misconceptions, to the point that most of the school believes her name is, in fact, "Sadako. " Sawako has always desired friends and acceptance, and thanks to Kazehaya's kindness, she gradually begins to open up to her classmates and talk to different people.

Kamisama Kiss. Plot[edit] After Nanami's father runs away due to gambling debts and she is evicted from her apartment, Nanami meets a strange man hanging from a tree because he is being chased by a dog. 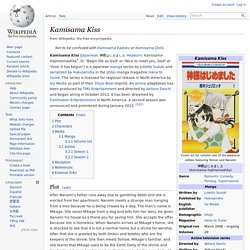 The man's name is Mikage. She saves Mikage from a dog and tells him her story. He gives Nanami his house as a thank you for saving him. She accepts the offer because she is homeless. Ouran High School Host Club.