A Re-Evaluation of Romance. The last week has been a period of intense re-evaluation. 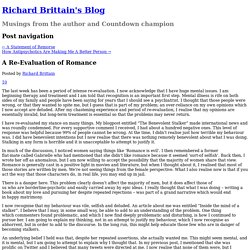 I now acknowledge that I have huge mental issues. I am beginning therapy and treatment and I am told that recognition is an important first step. The Benevolent Stalker. I apologise for my vile, strange, selfish and deeply disturbing behaviour. 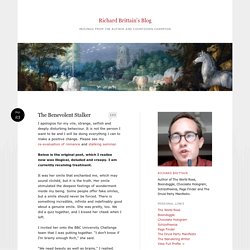 It is not the person I want to be and I will be doing everything I can to make a positive change. Please see my re-evaluation of romance and stalking seminar. Below is the original post, which I realise now was illogical, deluded and creepy. I am currently receiving treatment. Discovering the Deep South’s cliches all over again. In Paul Theroux’s new book, “Deep South,” the superficial stereotypes pile up at once. 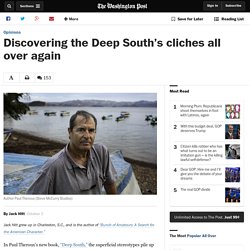 In the first scene, it’s a “hot Sunday morning” in Tuscaloosa, Ala., and there’s mention of snake-handling and talking in tongues, poverty, holy-roller churches, a black barbershop, gun shows, college football, the requisite Faulkner quote (“The past is not dead . . . ”) and even a sassy black lady (“You lost, baby?”). So far, I haven’t left the first page. Meet Claudette, An Intersex Sex Worker From Switzerland (NSFW) This is Claudette.

Claudette is a husband, a grandfather and an award-winning cyclist. She's also an intersex sex worker. OP-ED: Oakland - A Portrait of Male Privilege and A Lesson on Self Worth. I. 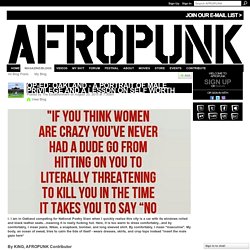 I am in Oakland competing for National Poetry Slam when I quickly realize this city is a car with its windows rolled and black leather seats...meaning it is really fucking hot. The Monetized Man — Matter. When people ask what I write about, I often mention “women” as a topic I cover. 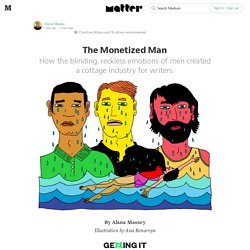 The idea that one can cover the topic of an entire half of the population is absurd, of course. But people generally know this to be shorthand for a constellation of social and romantic experiences from a female perspective. I’ve realized, though, that even that is untrue. I actually write about men. Particularly, I write about how the unrestrained, unaccountable emotional lives of men wreak havoc on women.

What Do Romance Readers and Pick-Up Artists Both Obsess About? Alphas. Newyorker. The first thing I noticed when I entered the two-hundred-year-old town house in Bath that serves as Manolo Blahnik’s weekend retreat was the alligator. 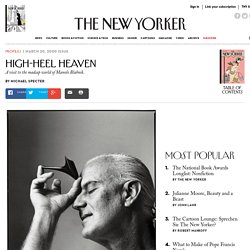 About three and a half feet long, with olive-brown skin and black hatch marks flecking its body, it was sprawled imperiously across a Queen Anne table at the end of the foyer. The jaws were parted, and the teeth shimmered in the fading light. It was a dismal, rainy afternoon, and we had just come from lunch—though Blahnik had been in no mood to eat. He has a bad back, and it was giving him so much trouble that day that he wore a brace. We rushed through the meal and then walked along the cobblestoned streets toward his house, which sits in the middle of one of those Georgian crescents that provided Jane Austen with just the right setting for “Persuasion.” Shoes have always had meaning. Inside Donald Trump’s Surging GOP Campaign. The bus tells you everything you need to know because the bus is a piece of shit. 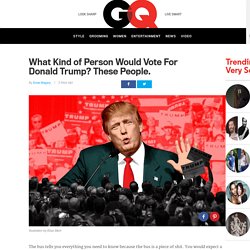 You would expect a Donald Trump campaign bus to be MOST LUXURIOUS, MOST DESIRED, NUMBER ONE BUS in the world, with a solid-gold chassis and marble toilets and a rooftop fuck cabana. This is not that bus. “It’s just a bus,” one Trump staffer told me, which is exactly right. It’s an old cross-country bus that still smells like an old cross-country bus, only it’s painted blue, with the name TRUMP in huge letters across both sides, plus the campaign hashtag #Make America Great Again! The Family with Twenty-Two Kids. When Sue Hoag was twelve, she read a book, “The Family Nobody Wanted,” about a couple in the nineteen-forties who adopted a multiracial posse of twelve children, despite having very little room or money. 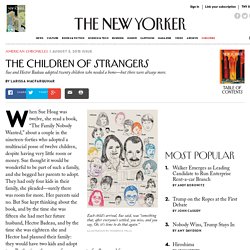 Sue thought it would be wonderful to be part of such a family, and she begged her parents to adopt. They had only four kids in their family, she pleaded—surely there was room for more. Her parents said no. But Sue kept thinking about the book, and by the time she was fifteen she had met her future husband, Hector Badeau, and by the time she was eighteen she and Hector had planned their family: they would have two kids and adopt two. By the time they were four years out of college and four years married, they had had the two kids and adopted the two kids and thought their family was complete. But there were more than two children in the world who needed parents. She Doesn’t Care That He Lies To Her — Human Parts — Medium. She doesn’t care that he lies to her, because he does it so well. 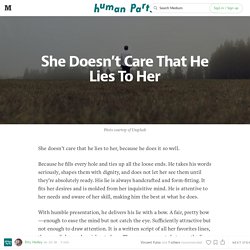 They sell sweat lodges or sacred pipe ceremonies, which promise to bring individual and global healing. Or they sell books and records that supposedly describe Indian traditional practices so that you too, can be Indian. The Death of the Hippies. In 1967, just after the Summer of Love, The Atlantic published “The Flowering of the Hippies,” a profile of San Francisco’s new youth culture. “Almost the first point of interest about the hippies was that they were middle-class American children to the bone,” the author noted. I Wish I Hadn't Donated My Eggs. The greatest Craigslist 'Missed Connection' of all time / Boing Boing.