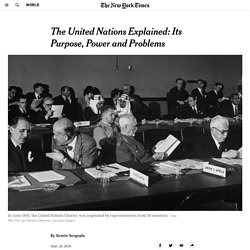 But how many people know what it actually does? Or how it works? Or why, as world leaders gather to kick off the 71st session of the United Nations General Assembly, the institution has struggled to live up to the promise of its founders: making the world a better, more peaceful place? The United Nations Charter was signed at a conference in San Francisco in June 1945, led by four countries: Britain, China, the Soviet Union and the United States. When the Charter went into effect on Oct. 24 of that year, a global war had just ended. The UN is failing – states must back off and give its leader the power to act. In a world facing many grave challenges across many spheres, people look to the United Nations to play a key role in resolving them. 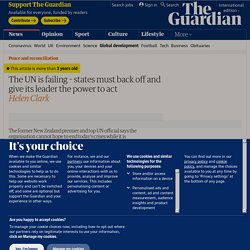 Yet there is broad appreciation that the UN is failing in vital areas, not least on peace and security. It is at its best in the development and humanitarian domain, where it works with and for people and gets results. But its seeming inability to act to end the protracted crises that have driven untold human misery – including the forced displacement of an unprecedented 65.6 million people – is an indictment of the organisation.

It badly needs structures and ways of working that will address this century’s crises, not those of 1945. Is the United Nations doomed? Much of the analysis of this year’s UN General Assembly meetings has depicted an organization fighting for relevance, fending off obsolescence, and trying to keep new international fora—notably the G-20— from displacing it. 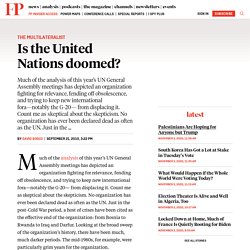 Count me as skeptical about the skepticism. No organization has ever been declared dead as often as the UN. Just in the post-Cold War period, a host of crises have been cited as the effective end of the organization: from Bosnia to Rwanda to Iraq and Darfur. Looking at the broad sweep of the organization’s history, there have been much, much darker periods. The mid-1980s, for example, were particularly grim years for the organization. How the World Health Organisation’s failure to challenge China over coronavirus cost us dearly. As the Japanese government counted the cost of the 2020 Tokyo Olympics being postponed to next year, Taro Aso, the country’s deputy prime minister, took out his frustration on the World Health Organisation (WHO). 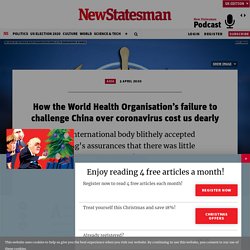 Preparation for a pandemic of exactly this nature had long been the WHO’s top priority. So why did it fail the test so badly when the moment came? Aso’s answer was that the WHO had grown far too close to China. Indeed, he suggested, it should change its name to the Chinese Health Organisation. Not only was the previous WHO director-general, Margaret Chan, a Chinese national but her successor, Tedros Adhanom Ghebreyesus, the former Ethiopian health minister, was China’s candidate. The WHO had been warned of the problem in Wuhan from a reliable but awkward source. But this is not a story that the WHO can tell. The WHO did not respond to Taiwan’s warning and did not pass it on to others. By this stage other countries were starting to get anxious. The WHO v coronavirus: why it can't handle the pandemic. What is Global Governance? - The Global Challenges Foundation. The Role of International Organisations in World Politics.

“More than ever before in human history, we share a common destiny. 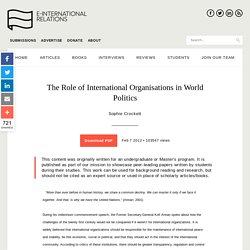 We can master it only if we face it together. And that, is why we have the United Nations.” (Annan: 2001) During his millennium commencement speech, the Former Secretary-General Kofi Annan spoke about how the challenges of the twenty first century would not be conquered if it weren’t for international organizations. It is widely believed that international organizations should be responsible for the maintenance of international peace and stability, be this economic, social or political, and that they should act in the interest of the international community. The creation of an international forum for multi-lateral negotiations came about with the Inter-Parliamentary Union (IPU) in 1889, which is still active today and has membership of 157 national parliaments.

The power of global institutions. As the world finds itself in a phase of transition from the post-cold war, US-led unipolar international order to a multi-polar or non-polar global power structure, there is a widespread consensus that the role of international organisations (IOs) is crucial for global governance. 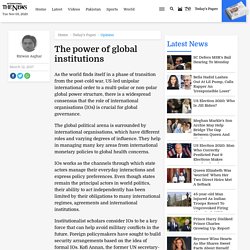 The global political arena is surrounded by international organisations, which have different roles and varying degrees of influence. They help in managing many key areas from international monetary policies to global health concerns. IOs works as the channels through which state actors manage their everyday interactions and express policy preferences. Even though states remain the principal actors in world politics, their ability to act independently has been limited by their obligations to many international regimes, agreements and international institutions. Institutionalist scholars consider IOs to be a key force that can help avoid military conflicts in the future. Email: rizwanasghar5@unm.edu.