Goldbears. The Best Canned Tomatoes, Tomato Paste, and Marinara Sauce Brands. We independently select these products—if you buy from one of our links, we may earn a commission. 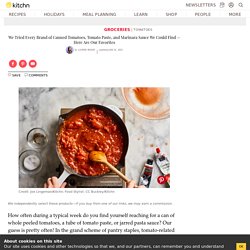 How often during a typical week do you find yourself reaching for a can of whole peeled tomatoes, a tube of tomato paste, or jarred pasta sauce? Pale and gelatinous: I tried vegan seafood so you don't have to. My friend Henry walked into my kitchen and eyed the can of vegan “skallops” on the counter. 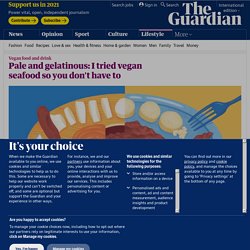 My goal for the week was to try as many vegan seafood items as possible. I wanted to know if I could learn to love them, and if they could replace seafood the way Beyond Meat has replaced burgers in my house. “You’re not really going to eat those, are you?” A New Factory in France Will Mass-Produce Bugs as Food. Though the world’s population is no longer predicted to grow as much as we thought by the end of this century, there are still going to be a lot more people on Earth in 30, 50, and 80 years than there are now. 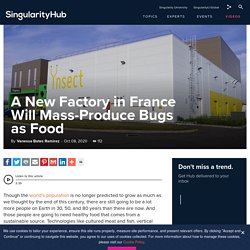 And those people are going to need healthy food that comes from a sustainable source. Technologies like cultured meat and fish, vertical farming, and genetic engineering of crops are all working to feed more people while leaving a smaller environmental footprint. A new facility in northern France aims to help solve the future of food problem in a new, unexpected, and kind of cringe-inducing way: by manufacturing a huge volume of bugs—for eating. Before you gag and close the page, though, wait; these particular bugs aren’t intended for human consumption, at least not directly. Our food system and consumption patterns are problematic not just because of the food we eat, but because of the food our food eats. Even Celebrity Cookbook Author Chrissy Teigen Is in Love With Sandoitchi. When we first wrote about Sandoitchi, the Deep Ellum pop-up was already selling out its Japanese sandwiches at a feverish pace. 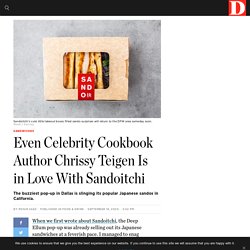 I managed to snag a few sandos before official cult status set in and haven’t bit into chicken katsu surrounded by fluffy milk bread since. Then about two weeks ago, Sandoitchi announced it would no longer sling sando out of Niwa Japanese BBQ’s space but instead decamp to Orange County and run a temporary pop-up in California. Ipso facto, celebrity cookbook author and all around sandwich aficionado Chrissy Teigen got hip to the chef Stevie Nguyen’s mega-popular and sought-after sandos. She posted about the meeting on social media. Where to Order Specialty Groceries Online 2020. Before quarantine, swinging by four different grocery stores to find super-specific ingredients for a single recipe wasn’t unheard of, especially for avid home cooks. 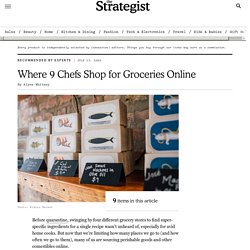 But now that we’re limiting how many places we go to (and how often we go to them), many of us are sourcing perishable goods and other comestibles online. Some kitchen staples, like produce and meat, can be difficult to get through same-day (or even same-week) delivery from places like Instacart, FreshDirect, and Peapod. How to Cook Rare Steak Cuts like Tri-tip, Teres major, Bavette or Picanha. With the COVID-19 pandemic still in full swing, many of the nation’s one-of-a-kind steakhouses — including Brooklyn legend Peter Luger — are turning to pickup and delivery as a means to stay afloat. 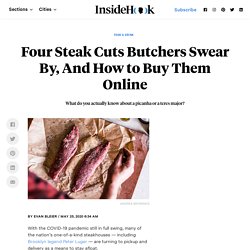 If you happen to live within walking distance or the delivery zone of one such establishment, by all means stop by and help your favorite local steak maestro. The 10 Best Cheeses to Buy at Trader Joes, According to Experts - Cooking Light. Almonds are out. Dairy is a disaster. So what milk should we drink? For environmentally minded consumers, the news is hard to swallow: almond milk is not healthy for the planet and the popular milk substitute is especially hard on bees. 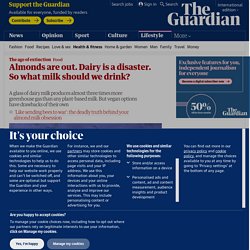 Our recent investigation into the connection between California’s industrialized almond industry and a record 50bn commercial bee deaths created quite a buzz. The widely read story prompted one primary response from readers: “What should we be drinking instead?” This is a thorny question, and food sustainability experts are reluctant to single out any one plant milk as best because all have pros and cons. But we’re going to try. One thing is clear. First Hamburger Recipe. Valentine's Day 2019 was a dark time for anyone used to expressing their feelings through candy. 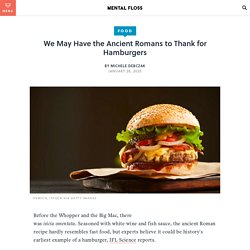 Following the demise of the New England Confectionary Company, or Necco, in 2018, SweetHearts were missing from shelves. Pig lovers, rejoice: Impossible pork and sausage are here. Seafood Delivery - Lobster, Salmon, Shrimp, Scallops - Sizzlefish. How Do They Make Meat-Like Burgers From Plants? Future Food Today: A SPACE10 Cookbook. Are you ready for the future of food? 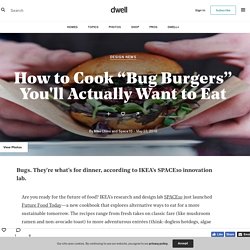 What Does Bahamas Conch Taste Like? I awoke with a start as the plane touched down, shaking off the daydream residue of cays and grottos, and looked out the window at the sun-drenched reverie known as the Bahamas. 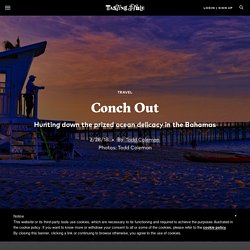 Omaha Cut Ribeye. Get $60 in Omaha Steaks Cash Your $60 in Omaha Steaks Cash will arrive in 3 E-Reward Card codes in the amounts of $30, $20 and $10 for each $79 shipment you send, up to a maximum of 3 per household. Your first E-Reward Card code will be emailed to you 48 hours after the order ships. Use them on your next three orders! *Savings shown over aggregated single item base price. Omaha Steaks Gift Cards, E-Gift Cards, Wine, Gift Baskets, Grills and Live Lobsters do not count toward the $79 minimum order requirement for the earned reward card. Meet the Man Who Wants to Make Eating Shad a Fad Again.

Warner Lew claims he has witnessed two people moan with rapture while eating smoked shad. Not just two people—two teenagers. They happened to have stopped by Lew’s kitchen right as he was taking a batch of canned shad out of the pressure cooker, and they were willing to give it a try. “I wish I had recorded the sound,” says Lew. Prepare for butterflies in your stomach with these insect delicacies. Future - Could you survive on just one food? Man cannot live on bread alone – not least because man would develop scurvy about a month or so into that little experiment. The best diets have plenty of variety in them, making sure you get everything from vitamin C to iron to linoleic acid without even having to think. Even fad diets that focus on just a few foods or on eliminating certain things are usually varied enough to be reasonably nutritious.

Still, in the extremely unlikely scenario that you had to live on just one food, are some nutritionally more complete than others? Tokyo Neapolitan: The New Wave of Japanese Pizza. Tsubasa Tamaki was concerned with the state of the pizza in his new oven. Wearing his uniform of white t-shirt, faded blue jeans, and white Converse sneakers, he had stopped talking and began to watch the dough, eyeing the fire; a second too long and the pizza would be ruined. The sauce burbled, he thrust his metal pizza peel under the pie, raised it close to the low brick ceiling, flicked his wrist a few times, giving it a twirl on the end of the peel, singeing the crust like a creme brulee glaze.

Impossible Foods. Your Breakfast Is About to Take a Weird Turn. James Yang We seem to have come full circle on milk. First people began spurning cow's milk in favor of soy, which they then swapped for almond or rice. Soon, baristas began touting hemp and coconut instead—nondairy milk sales have soared 30 percent since 2011. But the next trend for the beverage isn't a plant-based alternative: It's cow's milk—with a twist.

Though nearly identical to the stuff you grew up drinking, this milk is produced not by bovines, but by yeasts—single-celled fungi. Log In. Edible insect farms creep closer to reality in Europe. As many have discovered, insects can be a delicious, not-at-all-creepy food source that could save us all from a looming global protein deficit. The good news is that the main objection to raising insects for food and livestock feed – that it poses insurmountable chemical and biological health risks – has been tentatively ruled out by the European Food Safety Authority (EFSA), which says edible insects appear to pose no more of a chemical or biological hazard than any other form of livestock farming. In preparing their report, EFSA researchers drew data from peer reviewed scientific studies from France, the Netherlands and Belgium to create a risk profile identifying the potential biological, chemical and environmental hazards associated with farmed insects.

The report also considered the potential hazards if the insects are fed on kitchen waste and animal manure. First gene-edited meal served up from CRISPR cabbage. It's not often that two people sitting down to dinner marks a huge step forward for science, but that was the case when two men in Sweden tucked into a meal of pasta and fried vegetables recently. How to Pick Better Cheese to Eat. Scientists think cockroach milk could be the superfood of the future. Frog Eyes Farm Grows Some of America's Only Real Wasabi. Travel - The elusive cheese with no recipe. 3D-model of cream cheese can reduce food waste.

Video: A 3D-model of cream cheese helps scientists understand the structure of our food and could help to cut waste in the food industry (Video: University of Copenhagen, Denmark) Cream cheese is an essential ingredient for a delicious cheese cake or a tasty bagel. But it is also providing new scientific insights into the 3D-structure of food products. “There is still a lot that we don’t know about the structure of food, but this is a good step along the way to understanding and finding solutions to a range of problems related to food which cost the food industry a lot of money,” says co-author Jens Risbo from the Institute of Food science at the University of Copenhagen, Denmark, in a press release. Trader Joe's Food - The Best Frozen Food at Trader Joe's, According to Employees.

Hatch chili mac & cheese. Why does sugar in cornbread divide races in the South? Foodandwine. Inside the Louis' Lunch Hamburger. Tater Tot Nachos Are the Left Shark of Super Bowl 2016. Huffingtonpost. Huffingtonpost. Would You Put Ketchup Leather on Your Burger? Belgian scientists use hybrid yeasts to create boutique chocolates. Huffingtonpost. Huffingtonpost. Boston Bakery Pushes Pastry Limits, Stuffs Donuts With Lobster. How British Farmers Are Making Rapeseed (Canola) Posh And Flavorful. BIG Vegan Cheese Guide + Reviews! This Disgusting Video Shows How Processed Deli Meat Is Made. Street Food No More: Bug Snacks Move To Store Shelves In Thailand. The Fake Meat Industry's Quest To Make Faux Taste Real. Dining After 'Downton Abbey': Why British Food Was So Bad For So Long. How Snobbery Helped Take The Spice Out Of European Cooking.