3500 years of food globalization in one map. Share this Article You are free to share this article under the Attribution 4.0 International license. A new map shows how ancient cereal crops spread from isolated pockets of first cultivation to become dietary staples in civilizations across the Old World. Since the beginning of archaeology, researchers have combed the globe searching for evidence of the first domesticated crops.

Painstakingly extracting charred bits of barley, wheat, millet, and rice from the remains of ancient hearths and campfires, they’ve published studies contending that a particular region or country was among the first to bring some ancient grain into cultivation. The new research brings those studies together to trace the spread of grains around the world. The study illustrates the current scientific consensus on the prehistoric food globalization process that transformed diets across Eurasia and Northern Africa between 7,000 and 3,500 years ago. 3500 years of food globalization in one map. How to feed the world - without killing everything.

Why do we need to grow more food? 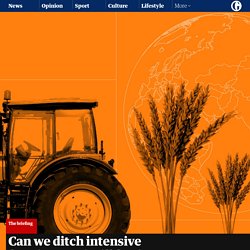 Food production around the world must rise by half in the next 30 years to sustain a global population expected to top 10 billion by 2050. Compared with 2010, an extra 7,400tn calories will be needed a year in 2050. If food production increases along current lines, that would require a landmass twice the area of India. How to feed the world - without killing everything. Can we ditch intensive farming - and still feed the world? GeorgeMonbiot sur Twitter : "It's surprising there's any life left in the seas at all, when you look at the intensity of industrial fishing. We are rightly exercised about plastic, but this is a far greater impact, that we tend to ignore.… Avertissement de redirection. Not often there’s an advert on the Underground that actually says something useful. This one from @Riverford helps to break the mould #organic… Simon Kuestenmacher sur Twitter : "#Map shows the Australian Wheat Belt in 1990 and 2015. Due to a changing climate the wheat growing area is now significantly smaller but due to technological advances the production increased by about 50% between 1990 an.

Map shows what share of the land is used for agriculture and the main agricultural product for each state in the US. Source. A piece I wrote on a new strategy to ensure #foodsecurity in the UK by farming in our thousands of abandoned coal mines. Fab article!… Where does our food come from Booklet. *****Meat or two veg? Find out your food’s climate footprint.

*****Food Miles Calculator. Home. Project Food Mile. - DIANA MARTIN: Map Portfolio. Food Miles, an infographic. Pupils had to map the origin of their food over the last week and compare them to each other they produced some interesting maps! #flippedclassroom #independentlearning #geography… Food Sustainability Across The World. Fictional farms and marketing messages. Peter Jackson In March 2016, Tesco faced criticism for labelling new food products with the names of farms that proved to be entirely fictional. 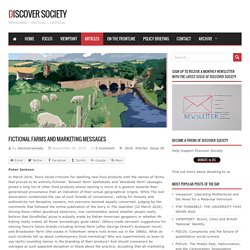 ‘Boswell Farm’ beefsteaks and ‘Woodside Farm’ sausages joined a long list of other food products whose naming is more of a gesture towards their generalised provenance than an indication of their actual geographical origins. While The Soil Association condemned the use of such ‘brands of convenience’, calling for honesty and authenticity not deceptive veneers, not everyone seemed equally concerned, judging by the comments that followed the online publication of the story in The Guardian (22 March 2016).

Among these rather jaundiced observers, one commentator asked whether people really believe that Goodfellas’ pizza is actually made by Italian-American gangsters or whether Mr Kipling really makes all those ‘exceedingly good cakes’. Nor is Tesco alone in using these marketing practices. It’s more about an image than it is a place…. Supermarkets to fly in emergency salad from US after Spanish floods. Supermarkets are preparing to fly in emergency salad from the US after heavy rains and flooding in Spain hit supplies. 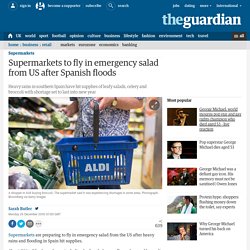 About 80% of fresh produce – including leafy salads as well as celery and broccoli – sold in the UK at this time of year comes from the Murcia region in southern Spain. Suppliers spoken to by the Guardian said yields in the region had dropped to as low as 30% of those expected at this time of year on some crops, such as little gem lettuces, as farmers’ fields were inundated last weekend. Celery yields have dropped to 40% of normal levels while some citrus crops, including satsumas and clementines, have also been affected. “There has been a deluge of flooding in that part of Spain and they have got blocked roads, flooded dispatch facilities and mobile rigs for picking as well as crops that have been washed away,” said Anthony Gardiner of G’s, a major supplier to the supermarkets with operations in the UK and Spain.

Very interesting #infographic contrasts lifespan of #farm animals with age at slaughter. #agchat #agriculture. Curry: To the 4 billion people who still think all the food in India is "curry". The Many Ways Farmer's Markets and Small Family Farms Are Essential to Our Future. Female Stall Holder At Farmers Fresh Food MarketPhoto Credit: Monkey Business Images/Shutterstock Ending food insecurity may be as easy as supporting your local farmers market. 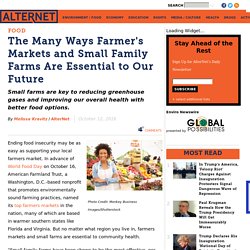 In advance of World Food Day on October 16, American Farmland Trust, a Washington, D.C. -based nonprofit that promotes environmentally sound farming practices, named its top farmers markets in the nation, many of which are based in warmer southern states like Florida and Virginia. But no matter what region you live in, farmers markets and small farms are essential to community health. “Small family farms have been shown to be the most effective, per acre, at ecological stewardship, biodiversity and production of nutrition,” said Severine von Tscharner Fleming, founder of the Greenhorns, a non-profit group working to support a new generation of young farmers.

The key to reducing greenhouse gases and improving our overall health with better food options? Earth has lost a third of arable land in past 40 years, scientists say. The world has lost a third of its arable land due to erosion or pollution in the past 40 years, with potentially disastrous consequences as global demand for food soars, scientists have warned. 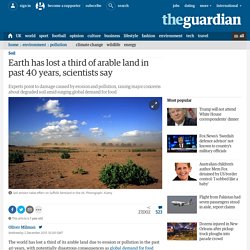 New research has calculated that nearly 33% of the world’s adequate or high-quality food-producing land has been lost at a rate that far outstrips the pace of natural processes to replace diminished soil. The University of Sheffield’s Grantham Centre for Sustainable Futures, which undertook the study by analysing various pieces of research published over the past decade, said the loss was “catastrophic” and the trend close to being irretrievable without major changes to agricultural practices.

Interactive map: How #climatechange could affect #foodsecurity around the world. "We have 60 years of harvest left" - @GeorgeMonbiot on "the most fundamental issue of all... which almost no one writes or talks about" Time to post this quote again. The #vegcrisis is a worrying sign of things to come. Thankfully plant geeks are on the case! Recycling body criticises Pringles and Lucozade packaging #geographyteacher. Bitesize - GCSE Geography - Food - AQA - Revision 6. Increasing food supplies without damaging the environment is a challenge. 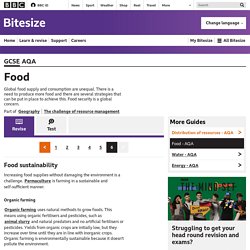 Permaculture is farming in a sustainable and self-sufficient manner. Organic farming Organic farming uses natural methods to grow foods. And natural predators and no artificial fertilisers or pesticides. Urban farming initiatives Urban farming involves growing food using space in and around cities. . , which is better for the environment. Sustainable fish and meat Modern fishing techniques use large nets. . Pretty sure Ed Sheeran would approve of this parody. (via www.globalcitizen.org/en/action/eu-halve-food-waste/) This is how a rice planting machine works. *****Food security: Michael Gove asked me to a meeting to share my expertise. I declined. Instead, I’ve given him a piece of my mind. – Jay Rayner.

A few weeks ago, I was approached by an official at the Department of the Environment Food and Rural Affairs. 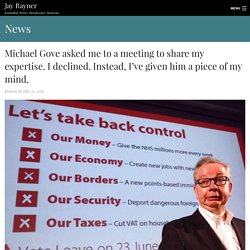 She told me the Secretary of State was holding a round table discussion for ‘innovative thinkers’ on July 25 to give him ‘food for thought in the early days of the new job’. He had asked for me to be invited. The Secretary of State is Michael Gove. I found this peculiar. Just before Christmas, when he was in the political wilderness following his calamitous attempt to secure the Tory leadership post the Brexit vote, he trolled me on Twitter. It was a bizarre episode which you can read about more fully here.

And now here he was, as Secretary of State, asking me for advice. *****The future of food security. The blockade of imports into Qatar by its Gulf neighbours has ramped up political tensions in the region, and again exposed the fragility of food supply chains The tensions with neighbouring members of the Gulf Cooperation Council, and consequent blockades of ports and airspace, has led to urgent new deals with Iran and Turkey and the potential for imminent shortages, food inflation and popular unrest. 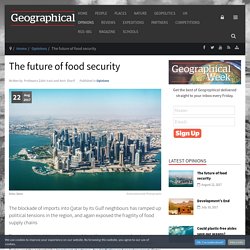 Qatar is now being forced to invest heavily into its New Port Project (NPP), with a Steering Committee and AlJaber Engineering (JEC) signing a contract for food security facilities and warehouses at a cost of QAR1.6 billion (£342million). *****Food security: Qatar has a glaring weakness in its reliance on imported food supplies. Can we feed 10 billion people on organic farming alone? In 1971, then US Secretary of Agriculture Earl Butz uttered these unsympathetic words: “Before we go back to organic agriculture in this country, somebody must decide which 50 million Americans we are going to let starve or go hungry.” 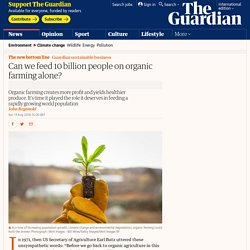 Since then, critics have continued to argue that organic agriculture is inefficient, requiring more land than conventional agriculture to yield the same amount of food. Proponents have countered that increasing research could reduce the yield gap, and organic agriculture generates environmental, health and socioeconomic benefits that can’t be found with conventional farming. Organic agriculture occupies only 1% of global agricultural land, making it a relatively untapped resource for one of the greatest challenges facing humanity: producing enough food for a population that could reach 10 billion by 2050, without the extensive deforestation and harm to the wider environment. Organic farming can help to both feed the world and preserve wildland. Can we feed 10 billion people on organic farming alone?