The Lifespan of a Lie – Trust Issues 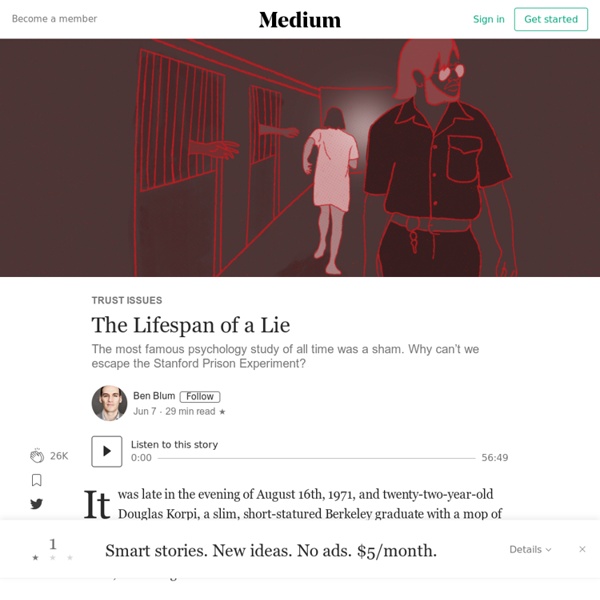 It was late in the evening of August 16th, 1971, and twenty-two-year-old Douglas Korpi, a slim, short-statured Berkeley graduate with a mop of pale, shaggy hair, was locked in a dark closet in the basement of the Stanford psychology department, naked beneath a thin white smock bearing the number 8612, screaming his head off. “I mean, Jesus Christ, I’m burning up inside!” he yelled, kicking furiously at the door. “Don’t you know? I want to get out! This is all fucked up inside! It was a defining moment in what has become perhaps the best-known psychology study of all time. Zimbardo, a young Stanford psychology professor, built a mock jail in the basement of Jordan Hall and stocked it with nine “prisoners,” and nine “guards,” all male, college-age respondents to a newspaper ad who were assigned their roles at random and paid a generous daily wage to participate. There’s just one problem: Korpi’s breakdown was a sham. “[The first day] was really fun,” Korpi recalled. “It’s a lie,” he said.

My IRB Nightmare [Epistemic status: Pieced together from memory years after the event. I may have mis-remembered some things or gotten them in the wrong order. Aside from that – and the obvious jokes – this is all true. APA privacy patriot act Welcome to 'CE Corner' “The NSA has built an infrastructure that allows it to intercept almost everything . . . . I can get your emails, passwords, phone records, credit cards.” — Edward Snowden The Two Types of Knowledge: The Max Plank/Chauffeur Test Charlie Munger, the billionaire business partner of Warren Buffett, frequently tells the story below to illustrate how to distinguish real knowledge from pretend knowledge. At the 2007 Commencement to the USC Law School, Munger explained it this way: I frequently tell the apocryphal story about how Max Planck, after he won the Nobel Prize, went around Germany giving the same standard lecture on the new quantum mechanics.Over time, his chauffeur memorized the lecture and said, “Would you mind, Professor Planck, because it's so boring to stay in our routine, if I gave the lecture in Munich and you just sat in front wearing my chauffeur's hat?”

How Aristotle Created the Computer - The Atlantic THE HISTORY Of computers is often told as a history of objects, from the abacus to the Babbage engine up through the code-breaking machines of World War II. In fact, it is better understood as a history of ideas, mainly ideas that emerged from mathematical logic, an obscure and cult-like discipline that first developed in the 19th century. Mathematical logic was pioneered by philosopher-mathematicians, most notably George Boole and Gottlob Frege, who were themselves inspired by Leibniz’s dream of a universal “concept language,” and the ancient logical system of Aristotle. Listen to the audio version of this article:Feature stories, read aloud: download the Audm app for your iPhone. Mathematical logic was initially considered a hopelessly abstract subject with no conceivable applications. A well-known history of computer science describes Shannon’s paper as “possibly the most important, and also the most noted, master’s thesis of the century.”

Rationing in the United Kingdom - Wikipedia Civilian rationing: A shopkeeper cancels the coupons in a British housewife's ration book in 1943 Rationing was introduced temporarily by the British government several times during the 20th century, during and immediately after a war.[1][2] At the start of the Second World War in 1939, the United Kingdom imported 20 million long tons (20 Mt) of food per year, including about 70% of its cheese and sugar, nearly 80% of fruits and about 70% of cereals and fats.

Supervised learning: predicting an output variable from high-dimensional observations — scikit-learn 0.18.1 documentation The problem solved in supervised learning Supervised learning consists in learning the link between two datasets: the observed data X and an external variable y that we are trying to predict, usually called “target” or “labels”. Most often, y is a 1D array of length n_samples. All supervised estimators in scikit-learn implement a fit(X, y) method to fit the model and a predict(X) method that, given unlabeled observations X, returns the predicted labels y. furud: Mu-ming Poo's Letter to his students in 2002 Written on 오전 11:22 by furud 직접보니 느낌이 더 팍 오는데^^; Mu-ming Poo is head of the Division of Neurobiology, Department of Molecular and Cell Biology at University of California, Berkeley, California, USA. He is also director of the Institute of Neuroscience, Chinese Academy of Sciences, Shanghai, China.

Critique of Positive Psychology and Positive Interventions In a recent post on the popular German positive psychology (PP) blog Mappalicious, Sonja Lyubomirsky was quoted as saying, “I hope for the label ‘positive psychology’ to be retired. We don’t need it anymore” (Rose, 2016). This raises a question in the minds of PP practitioners and enthusiasts: Is the field spearheaded by Seligman and Csikszentmihalyi (2000) on its last legs? Has the domain been over-used for commercial interests, especially for the field of positive coaching? Grant and Schwartz (2011) have posited that the “too-much-of-a-good-thing” (TMGT) effect in any domain is omnipresent due to an overarching meta-theoretical principle, whereby once positive phenomena reach the highest point of an inverted U, their effects turn negative.