Augmented Reality to Inspire Creative Writing. During this first week of school, I wanted to inspire my students to be creative and have fun with their learning. 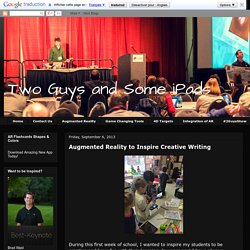 In years past I have always struggled to make my writing lessons fun and engaging, yet productive. This is year I decided to introduce writing with the help of my favorite tech tool: Augmented Reality! I gave the students a choice to pick one of the several different coloring pages from the app Crayola Color Alive powered by DAQRI, and use the image on the page as a prompt to write a creative story.

There was only two rules for the assignment: 1. Have fun2. Once most of the class had finished coloring and writing their stories, I asked for a few volunteers to share what they created. Mobile AR market to grow at a CAGR of 96.52% between year 2015 to 2019 - Media Releases. Media releases are provided as is by companies and have not been edited or checked for accuracy. 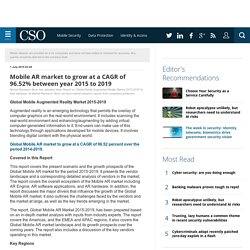 Any queries should be directed to the company itself. Market Research Store has uploaded latest Report on "Global Mobile Augmented Reality Market 2015-2019" in their database, At Market Research Store, we have market research reports from competent publishers. This Ingenious Augmented Reality Mirror will Take Telepresence to A New Level. Man has always toyed with different ideas in which communication can be done. 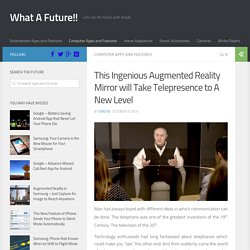 The telephone was one of the greatest inventions of the 19th Century. The television of the 20th. Sarcofagi egizi da restaurare, arrivano gli “occhiali intelligenti” Dal passato remoto a un futuro di fantascienza. 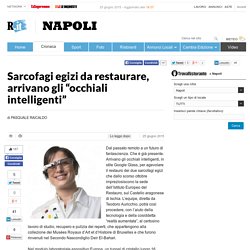 How Augmented Reality Can Revolutionize the Retail Industry? Disruptive technology, smart devices and wearables have blurred the barriers between the physical and digital world. 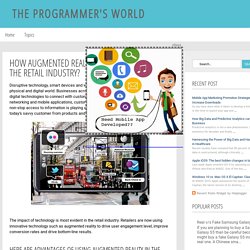 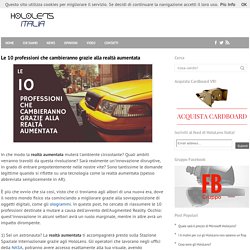 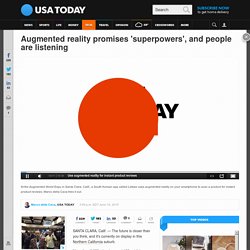 More than 3,000 attendees and 100 exhibitors on Tuesday packed the latest edition of the Augmented World Expo, a virtual-world extravaganza that has grown ten-fold since its modest debut six years ago. From virtual-reality headsets to brain-scanning headbands, the Santa Clara Convention Center was teeming with tech that would have been pure fantasy decades back. "This is all about bringing superpowers to the people, both at work and at home," says AWE founder Ori Inbar, noting a recent Digi-Capital report predicting AR/VR will hit $150 billion in revenue by 2020, with AR dominating 80% of the market. "I believe 2016 will be the year of shakeups and mergers. " Augmented-reality displays may make driving less safe. Augmented-reality head-up displays that present digital images on windshields to alert drivers to everything from possible collisions to smartphone activity, may actually make driving less safe, scientists have found. 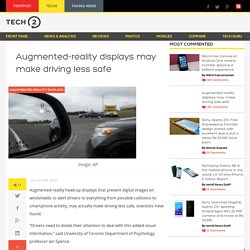 “Drivers need to divide their attention to deal with this added visual information,” said University of Toronto Department of Psychology professor Ian Spence. “Not only will drivers have to concentrate on what’s happening on the road around them as they’ve always done, they’ll also have to attend to whatever warning pops up on the windshield in front of them,” Spence said. Spence and his students Yuechuan Sun and Sijing Wu designed two tests to measure the impact of this added visual information. Participants first completed a series of computer-based trials in which they reported a number of randomly arranged spots (between one and nine) displayed on a screen as quickly and accurately as possible when prompted. Augmented reality windshields not safe: Study. Toronto: In a contradictory finding, researchers say the Augmented-reality head-up displays (AR-HUDs) are a threat to safety. 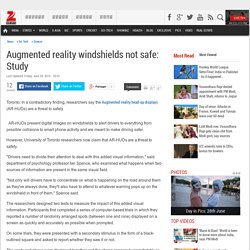 AR-HUDs present digital images on windshields to alert drivers to everything from possible collisions to smart phone activity and are meant to make driving safer. However, University of Toronto researchers now claim that AR-HUDs are a threat to safety. "Drivers need to divide their attention to deal with this added visual information," said department of psychology professor Ian Spence, who examined what happens when two sources of information are present in the same visual field.

The Future of Safer Cycling: Augmented Reality Helmets. Future Cities Catapult, the team behind the "3D Soundscape" headset, prototype a cycle helmet that would supply rides with spatial and contextual information The construction of bike lanes in accordance with New York City’s Citi Bike stations popping up around the city in recent years has stirred much controversy. 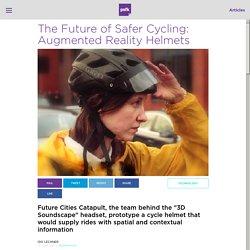 While the lanes seem to benefit delivery men and casual bikers alike, many drivers have expressed their frustration over stolen driving lanes and parking spaces now filled by the green bike path. Moreover, the growing number of people encouraged to abandon their cars or the subway in favor of a more health-minded and eco-friendly pursuit inevitably spikes the number of biker-related casualties. Future ready: Augmented reality revolutionizes how we work. Though it’s currently in its infancy, augmented reality (AR) technology will change how we work. Our ability to integrate AR apps into our everyday business situations is driving not only a new workplace, but a new employee mindset. It is completely revolutionizing how we collaborate and access data.

So what is augmented reality and how will it impact business to#BeFutureReady? In his report “Innovation Insight: Augmented Reality Will Become an Important Workplace Tool,” Tuong Huy Nguyen, principal research analyst at Gartner, defined augmented reality as “the real-time use of information in the form of text, graphics, audio and other virtual enhancements integrated with real-world objects.” “AR leverages and optimizes the use of other technologies such as mobility, location, 3-D content management and imaging and recognition,” he wrote.

Virtual Reality to Shape the Future of Retail Shopping. Virtual reality, which has roots in gaming, is now being adapted in retail to provide shoppers with an immersive experience. The aim is to include this technology by next year so that real-life shopping becomes more thrilling by pairing it with the ease of e-commerce. Imagine using a VR headset in France and being transported to a high-end boutique in Manhattan with designer items! A virtual storefront is yet to be announced by any retailer, but developers are trying to create an experience where shoppers could be immersed using devices like Oculus Rift or Google Cardboard. Read Also – YouTube VR Video Lets You Become the Terminator A VR Shopping Experience SapientNitro, a marketing agency which is owned by Publicis Groupe teamed up with The Line, a luxury boutique, to create a VR demonstration which takes consumers to The Apartment, the brand’s store in Manhattan.

Viewers will be able to walk around the store and fix their sight on hotspots to move towards furnishings. Facing Challenges. Is Augmented Reality the key to a new digital future? By Saurabh Kumar, MD of In2IT Technologies South Africa. The concept of Augmented Reality (AR) has existed for many years now – and commentators have remained rigidly sceptical about whether it will truly materialise in our everyday lives. However, exponential advances in the processing power of smartphones, and the ever-increasing use of location-based services based on GPS, have thrust AR back into the limelight in recent months.

Augmented Reality Puts the Future In Focus. World Expo Italy 2015 — Expo Milano — is coming, and as the history of this major event shows, Milan will be invaded by hundreds of thousands of tourists from around the world. Nearly 150 countries, about 94 percent of the world’s population, are taking part in the event, and speaking at least 80 different dialects that could pose inevitable language barriers. Of course, ideal solutions would include personal interpreters or even learning Italian, both unrealistic given the short amount of time before the expo starts. There is, however, a way to interpret languages with smartphones that utilize augmented reality applications, a relatively new technology that also shows potential in other areas such as medicine and education.

The dangers of augmented reality. You know you shouldn’t be texting or surfing the web while walking down a crowded street or driving a car because it can be too distracting. Google Glass, Sony’s SmartEyeglass, or Microsoft HoloLens, augmented reality devices may appear to solve that problem. These devices present contextual information transparently or in a way that obscures little, seemingly letting you navigate the world safely, in the same way head-up displays enable fighter pilots to maintain situational awareness. But can augmented reality really deliver on that promise?

Brands, get ready for augmented reality 2.0. Karl Woolley is creative technologist at Oscar-winning creative solutions partner, Framestore The term “fast-paced innovation” feels like an overused cliché, but there’s simply no other way to describe what’s going on in the world of augmented reality (AR). Just halfway through 2015, the year has already witnessed several significant AR milestones. January saw the launch of Microsoft’s HoloLens (“sci-fi glasses that make you see you holograms”). In February, Sony announced developer pre-ordering for its SmartEyeglass.

Then April was rife with rumors that Google Glass will be resurrected. Advertisement. Augmented-reality tech fills your living room with virtual furniture. When shopping for clothes, most consumers insist on trying them on before buying — but that hasn’t usually been an option when shopping for furniture. Now it is — except that, instead of buying a sofa and having it delivered to see how it looks, consumers can use technology by Israel’s Cimagine to virtually visualize how a piece of furniture will fit in with their décor.

Get the Start-Up Israel's daily newsletter and never miss our top stories Free Sign up! 5 things corporates need to learn about Augmented Reality - Memeburn. By Graeme Lipschitz: Columnist on 17 June, 2015. TREND REPORT: Engaging with augmented reality now and in the future. Augmented-reality tech fills your living room with virtual furniture. The Alignment Problem: Building Augmented Reality. To scale or not to scale? When it comes to augmented reality, the right camera alignment and scale are absolutely essential to bridging the gap between real and virtual worlds.

Augmented Reality Glasses Getting Closer To Reality. Augmented and Virtual Reality Devices to Become a $4 Billion-Plus Business in Three Years. The Alignment Problem: Building Augmented Reality. The State of Augmented Reality in a Post-Google Glass World. The theme of Augmented World Expo 2015 was "Superpowers to the People," and from the banners hanging in the Santa Clara Convention Center displaying comic book-style silhouettes of heroic men and women with futuristic goggles, you'd think that augmented reality could give you the ability to fly or shoot lasers out of your eyes. How Augmented Reality Can Revolutionize the Retail Industry?

Disruptive technology, smart devices and wearables have blurred the barriers between the physical and digital world. Businesses across the globe are now embracing the power of digital technologies to connect with customer. Due to the rapid proliferation of social networking and mobile applications, customers now have access to information. Future of Wayfinding: Augmented Reality for Urban Bicyclists.

Augmented reality game makes a haunted house of any home. The scariest films often stay with us long after we’ve left the movie theater and gone home. For those who don’t find films quite scary enough, though, there is a new horror game app — called Night Terrors — which promises to transform any house into a petrifying hellscape. The app uses environment mapping, gyroscope sensors and the player’s own smartphone camera and flashlight to create an immersive augmented reality, complete with ghosts and psychopaths.