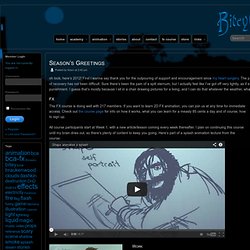 First I wanna say thank you for the outpouring of support and encouragement since my heart surgery. The past couple of months of recovery has not been difficult. Sure there’s been the pain of a split sternum, but I actually feel like I’ve got off very lightly, as if escaping some kind of punishment. I guess that’s mostly because I sit in a chair drawing pictures for a living, and I can do that whatever the weather, whatever my health. The FX course is doing well with 217 members. All course participants start at Week 1, with a new article/lesson coming every week thereafter. Work I’ve been working on a lot of things. On top of that I have two freelance commitments, together taking up about 7 more days.

The main Dashkin focus right now is the Kickstarter rewards and the art for those. Unfortunately a BiteyCastle holiday card wasn’t squeezed into the schedule this year, so what I started in October 2010 may finally see the light of day in December 2012. Michel Gagné - Gallery. Flash FX Animation. View topic - General Stick Figure Animation Tutorial [ beginners ] Animation Test For LAS – Action/Body Mechanics Assignment « PaRrOt Animation Blog. Animation Principles. (Flash player is required to view the examples.) 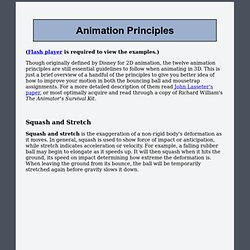 Though originally defined by Disney for 2D animation, the twelve animation principles are still essential guidelines to follow when animating in 3D. This is just a brief overview of a handful of the principles to give you better idea of how to improve your motion in both the bouncing ball and mousetrap assignments. For a more detailed description of them read John Lasseter's paper, or most optimally acquire and read through a copy of Richard William's The Animator's Survival Kit. Squash and Stretch Squash and stretch is the exaggeration of a non-rigid body's deformation as it moves. Click the image to see the bouncing ball animation. One very important rule of squash and stretch is that volume should always remain consistent. 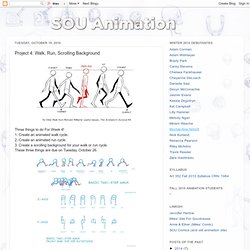 1. Create an animated walk cycle. 2. Create an animated run cycle. 3. Create a scrolling background for your walk or run cycle. Miles demo's the basics of creating a walk cycle: Link to URL And creating a scrolling background:Link to URL More cycles from SOU alum, Jill Bruhn! Animation tutorial - walk cycle part 1. Project #4 Walk Cycle. Think about your character's personality and the way it is feeling and see if you can capture this in your animation. 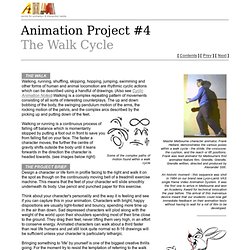 Characters with bright, happy dispositions are usually light-footed and bouncy, spending more time up in the air than down. Sad depressed characters will plod along with the weight of the world upon their shoulders spending most of their time close to the ground. They drag their feet, never lifting them very high, in an effort to conserve energy. Animated characters can walk about a third faster than real life humans and yet still look quite normal so 8-16 drawings will be sufficient unless your character is particularly lethargic. Bringing something to 'life' by yourself is one of the biggest creative thrills going. So, get up off your chair and walk, run, skip, or hop around the studio. Does your character have a limp? Think of props like umbrellas, hats and bags crutches, walking sticks which might make your cycle richer and more interesting to look at.